Encyclopedia
The coat of arms of Chile
Chile
Chile ,officially the Republic of Chile , is a country in South America occupying a long, narrow coastal strip between the Andes mountains to the east and the Pacific Ocean to the west. It borders Peru to the north, Bolivia to the northeast, Argentina to the east, and the Drake Passage in the far...
dates from 1834 and was designed by the English artist Charles Wood Taylor. It is made up by a figurative background divided in two equal parts: the top one is blue and the bottom, red. A five pointed white star is in the centre of the shield. This background is supported in one side by a condor
Condor
Condor is the name for two species of New World vultures, each in a monotypic genus. They are the largest flying land birds in the Western Hemisphere.They are:* The Andean Condor which inhabits the Andean mountains....
, the most significant bird of prey from the Andes
Andes
The Andes is the world's longest continental mountain range. It is a continual range of highlands along the western coast of South America. This range is about long, about to wide , and of an average height of about .Along its length, the Andes is split into several ranges, which are separated...
, and in the other, by a huemul, the most singular and rare mammal of the Chilean territory. Both animals have in their heads the navy's golden crown, symbol of the heroic deeds of the Chilean Navy in the Pacific Ocean
Pacific Ocean
The Pacific Ocean is the largest of the Earth's oceanic divisions. It extends from the Arctic in the north to the Southern Ocean in the south, bounded by Asia and Australia in the west, and the Americas in the east.At 165.2 million square kilometres in area, this largest division of the World...
.

The coat of arms is crowned by a three feathered crest; each feather bearing one colour: blue, white and red. This crest was a symbol of distinction that former Presidents of the Republic used to wear on their hats.

Underneath the coat of arms and on the ellaborated pedestal, there is a white band with the motto: "Por la Razón o la Fuerza" ("By reason or by force").

This emblem is the last of a series of variations due to diverse circumstances and understandings.


The first coat of arms 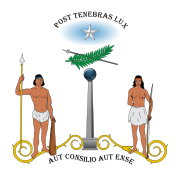 The first coat of arms was established during the office of President José Miguel Carrera
José Miguel Carrera
José Miguel Carrera Verdugo was a Chilean general, member of the prominent Carrera family, and considered one of the founders of independent Chile. Carrera was the most important leader of the Chilean War of Independence during the period of the Patria Vieja...
, in 1812. It was designed over an oval in which center was depicted a column representing the Tree of Freedom. On top of this column was a terrestrial globe; over the globe, a lance and a palm leaf crossed and over these two, a star.

Standing, on both sides of the fixture, was the figure of a woman and a man, both indigenous. On top of everything was written, in Latin, "Post Tenebras Lux" ("After the Darkness, Light") and at the bottom, "Aut Consilio Aut Ense" ("By Council or by Sword").

In 1817 two new coats of arms emerged, both variations of this last one, but did not last long.

Two years later, on 23 September 1819, a new project for a coat of arms was approved in the Senate
Senate of Chile
The Senate of the Republic of Chile is the upper house of Chile's bicameral National Congress, as established in the current Constitution of Chile.-Composition:...
. It was a dark blue field, with a column standing on a white marble pedestal in the middle. On top of this column, the new American world with the word "Freedom" over it. Above this sign, a five pointed star, representing the Province of Santiago
Santiago, Chile
Santiago , also known as Santiago de Chile, is the capital and largest city of Chile, and the center of its largest conurbation . It is located in the country's central valley, at an elevation of above mean sea level...
. Two similar stars, representing Concepción
Concepción, Chile
Concepción is a city in Chile, capital of Concepción Province and of the Biobío Region or Region VIII. Greater Concepción is the second-largest conurbation in the country, with 889,725 inhabitants...
and Coquimbo
Coquimbo
Coquimbo is a port city, commune and capital of the Elqui Province, located on the Pan-American Highway, in the Coquimbo Region of Chile. Coquimbo lies in a valley south of La Serena, with which it forms Greater La Serena with more than 400,000 inhabitants. The commune spans an area around the...
, were at each side of the column.

This combination of elements was surrounded by two small branches of laurel with their buds tied with a tricolor ribbon. Around this ribbon, the whole aromory of the country was depicted in strict order: cavalry, infantry, dragoons, artillery and bombardiers.

To complete the coat of arms, an indigenous man held it with his hands over his head, while sitting on an American cayman with one foot resting on the Horn of Plenty
Horn of Plenty
Horn of Plenty may mean:*Cornucopia, a symbolic, hollow horn filled with the inexhaustible gifts of celebratory fruits*Craterellus cornucopioides, a mushroom resembling the shape of a cornucopia...
. The cayman had, in its jaws, the Lion of Castile, whose crown laid fallen on one side and was holding the ripped Spanish flag
Flag of Spain
The flag of Spain , as it is defined in the Spanish Constitution of 1978, consists of three horizontal stripes: red, yellow and red, the yellow stripe being twice the size of each red stripe...
with its front paws.