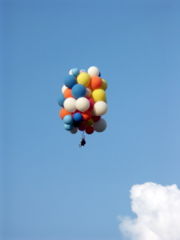 Cluster ballooning is a form of ballooning
Balloon (aircraft)
A balloon is a type of aircraft that remains aloft due to its buoyancy. A balloon travels by moving with the wind. It is distinct from an airship, which is a buoyant aircraft that can be propelled through the air in a controlled manner....
where a harness attaches a balloonist to a cluster of helium
Helium
Helium is the chemical element with atomic number 2 and an atomic weight of 4.002602, which is represented by the symbol He. It is a colorless, odorless, tasteless, non-toxic, inert, monatomic gas that heads the noble gas group in the periodic table...
-inflated rubber balloons.

Unlike traditional hot-air balloons, where a single large balloon is equipped with vents enabling altitude control, cluster balloons are multiple, small, readily available and individually sealed balloons. To control flight, arrest a climb or initiate a descent, the pilot incrementally jettisons or deflates balloons. Ballast
Sailing ballast
Ballast is used in sailboats to provide moment to resist the lateral forces on the sail. Insufficiently ballasted boats will tend to tip, or heel, excessively in high winds. Too much heel may result in the boat capsizing. If a sailing vessel should need to voyage without cargo then ballast of...
, e.g., bottled water, can also be jettisoned to facilitate ascent.

Larry Walters
Larry Walters
Lawrence Richard Walters, nicknamed "Lawnchair Larry" or the "Lawn Chair Pilot", was an American truck driver who took flight on July 2, 1982 in a homemade airship. Dubbed Inspiration I, the "flying machine" consisted of an ordinary patio chair with 45 helium-filled weather balloons attached to it...
, without any prior ballooning experience, attached 42 helium
Helium
Helium is the chemical element with atomic number 2 and an atomic weight of 4.002602, which is represented by the symbol He. It is a colorless, odorless, tasteless, non-toxic, inert, monatomic gas that heads the noble gas group in the periodic table...
-filled weather balloon
Weather balloon
A weather or sounding balloon is a balloon which carries instruments aloft to send back information on atmospheric pressure, temperature, humidity and wind speed by means of a small, expendable measuring device called a radiosonde...
s to a lawn chair and lifted off — in 1982. In defending against charges later filed against him by the FAA, he stated that he intended to rise just a few hundred feet (about 100 metres), but underestimated helium's lifting power causing his tethering strap to break prematurely. Walters quickly rose to nearly 3 miles (5 km), over 50 times his intended maximum altitude. Walters reportedly had planned to control his altitude by using a pellet gun to selectively pop some of the balloons. However, he was initially hesitant to shoot any balloons, as he was concerned about falling out due to a loss of stability. Reaching a high altitude and seeing no other way of getting down, he eventually shot several of the balloons, initiating his descent.

John Ninomiya's flights have been featured on The Science Channel
The Science Channel
Science is a United States cable, satellite and IPTV Television Network produced by Discovery Communications. Science features programming in the fields of space, technology, prehistory and animals.-History:...
, The History Channel
The History Channel
History, formerly known as The History Channel, is an American-based international satellite and cable TV channel that broadcasts a variety of reality shows and documentary programs including those of fictional and non-fictional historical content, together with speculation about the future.-...
, TechTV
TechTV
TechTV was a 24-hour cable and satellite channel based in San Francisco featuring news and shows about computers, technology, and the Internet. In 2004, it merged with the G4 gaming channel which ultimately dissolved TechTV programming...
, TLC, and MTV
MTV
MTV, formerly an initialism of Music Television, is an American network based in New York City that launched on August 1, 1981. The original purpose of the channel was to play music videos guided by on-air hosts known as VJs....
.

The Guinness Book of World Records recognizes the highest altitude attained via cluster ballooning to be that achieved by Mike Howard (UK) and Steve Davis (USA), who on August 4 2001, over Los Lunas, NM, USA, used 400 helium balloons to reach a height of over 18300 feet (5,577.8 m). Larry Walters is estimated to have reached 16000 feet (4,876.8 m) in 1982. His record is not recognized, however, because he did not carry a proper altimeter.

Yoshikazu Suzuki departed from Lake Biwa
Lake Biwa
is the largest freshwater lake in Japan, located in Shiga Prefecture , northeast of the former capital city of Kyoto. Because of its proximity to the ancient capital, references to Lake Biwa appear frequently in Japanese literature, particularly in poetry and in historical accounts of battles.-...
in Japan on 23 November 1992 with helium balloons. He was spotted by a Japanese coast guard aeroplane on 25 November 1992, located about 800 km offshore over the Pacific Ocean, at altitude between 2,500 and 4,000 m, and was never seen again.

In April 2008, in Brazil, Roman Catholic priest Adelir Antonio de Carli
Adelir Antonio de Carli
Adelir Antonio de Carli , also known in Brazil as Padre Baloneiro, was a Brazilian Catholic priest, famous for going missing during an attempt at cluster ballooning on April 20, 2008...
ascended with 1000 balloons. Ground observers lost track of him when he floated out above the ocean, and he was missing until his body was found by an offshore oil rig support vessel on 5 July 2008. Carli at one point reached an altitude of 6,000 metres (19,685 ft) before losing contact with authorities; his altitude may have indeed been the record for cluster ballooning, but it cost him his life.

Just two months later, in June 2008, FAA licensed pilot Jonathan R. Trappe attached a cluster of balloons to his standard, unmodified office chair and flew it to an altitude of 14,783 feet. The flight reportedly lasted four hours and covered 50 miles before Trappe returned to earth, retired the chair, and returned it back to his workplace.

On May 28, 2010, SkyNews reported on Jonathan Trappe's crossing of the English Channel
English Channel
The English Channel , often referred to simply as the Channel, is an arm of the Atlantic Ocean that separates southern England from northern France, and joins the North Sea to the Atlantic. It is about long and varies in width from at its widest to in the Strait of Dover...
by cluster balloon. Trappe departed near Challock, England, crossed over the White Cliffs of Dover at St. Margarets Bay, and made landfall again over Dunkirk, France. Trappe then tracked inland, and landed safely in a farmer's cabbage patch in France..

Smaller balloon clusters consisting of several toy balloons are sometimes used for creating flying light effects by using them as a carrier for lightstick
Lightstick
A glow stick is a single-use translucent plastic tube containing isolated substances which when combined make light through a chemical reaction-induced chemiluminescence which does not require an electrical power source...
s or other small light sources. They can be also used for other amateur scientific experiments, such as making aerial photographs or atmospheric measurements.

Such toy balloons, with or without helium filling, are more readily available than bigger balloons.