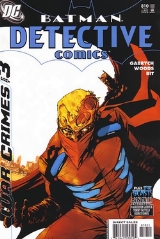 Encyclopedia
The Cluemaster is a fictional character
Fictional character
A character is the representation of a person in a narrative work of art . Derived from the ancient Greek word kharaktêr , the earliest use in English, in this sense, dates from the Restoration, although it became widely used after its appearance in Tom Jones in 1749. From this, the sense of...
, a DC Comics
DC Comics
DC Comics, Inc. is one of the largest and most successful companies operating in the market for American comic books and related media. It is the publishing unit of DC Entertainment a company of Warner Bros. Entertainment, which itself is owned by Time Warner...
supervillain
Supervillain
A supervillain or supervillainess is a variant of the villain character type, commonly found in comic books, action movies and science fiction in various media.They are sometimes used as foils to superheroes and other fictional heroes...
and enemy of Batman
Batman
Batman is a fictional character created by the artist Bob Kane and writer Bill Finger. A comic book superhero, Batman first appeared in Detective Comics #27 , and since then has appeared primarily in publications by DC Comics...
. A failed game show host, he became a criminal who left clues to his crimes, though unlike the Riddler
Riddler
The Riddler is a fictional character, a comic book character and supervillain published by DC Comics, and an enemy of Batman. Created by Bill Finger and Dick Sprang, the character first appeared in Detective Comics #140 ....
's, they were not riddles.

The Cluemaster starts his criminal campaign by a daring but unsuccessful attempt to learn the secret identity of the Batman, in order to gain a fighting edge. He returns to Gotham for a rematch with Batman, then appears in several supervillain crowd scenes over the years.

Cluemaster makes his grand reappearance in Detective Comics
Detective Comics
Detective Comics is an American comic book series published monthly by DC Comics since 1937, best known for introducing the iconic superhero Batman in Detective Comics #27 . It is, along with Action Comics, the book that launched with the debut of Superman, one of the medium's signature series, and...
#647 by Chuck Dixon and Tom Lyle. In this three-issue story, Cluemaster has reformed and been released from Blackgate Prison. Cured of his compulsion to leave clues, Cluemaster originally joins a gang and plans their heists in exchange for 10 percent of their winnings. He later kills the leader by suffocating him with a strong polymer
Polymer
A polymer is a large molecule composed of repeating structural units. These subunits are typically connected by covalent chemical bonds...
over his mouth and nose, and begins to plan a master heist.

During this time it is revealed Arthur Brown has a daughter named Stephanie, but rarely spends any time with her due to long periods of incarceration. Stephanie is furious when she discovers that he has returned to crime without his need to leave clues behind. Making a costume for herself, she calls herself The Spoiler, finds out her father's plans, and leaves clues so that the police and Batman can stop him. Robin
Robin (comics)
Robin is the name of several fictional characters appearing in comic books published by DC Comics, originally created by Bob Kane, Bill Finger and Jerry Robinson, as a junior counterpart to DC Comics superhero Batman...
spots Spoiler on the rooftops during a police bust of Cluemaster's apartment and unmasks her, though she incapacitates Robin by hitting him in the face with a brick. Robin tracks her down and Batman, Robin and Spoiler set a plan in motion to take down Cluemaster. Spoiler was forbidden from going to the bust because she was only motivated by revenge. Catching Cluemaster at his mall heist whilst he hauls a giant glass canister of money away by air, Stephanie is then held hostage by Cluemaster atop the canister, holding a vial of acid
Acid
An acid is a substance which reacts with a base. Commonly, acids can be identified as tasting sour, reacting with metals such as calcium, and bases like sodium carbonate. Aqueous acids have a pH of less than 7, where an acid of lower pH is typically stronger, and turn blue litmus paper red...
to her face as Batman tries to stop him. Batman tells Cluemaster to stop and Cluemaster, thinking Batman will only lecture him about how it is morally wrong to disfigure a child, is taken aback when Batman simply reveals Spoiler is his daughter. Spoiler uses the shock of the revelation to gain the upper hand and uses one of the chains attached to the Gunship lifting the canister to strangle Cluemaster, but Batman prevents this. Cluemaster is taken back to Blackgate.

Each time the Cluemaster escapes or start some new plan, Stephanie dons her costume again in order to foil him. Eventually, she realizes she enjoys being a hero, and begins regular patrols as Spoiler. For a brief period of time she even replaces her boyfriend, Tim Drake, as Robin. 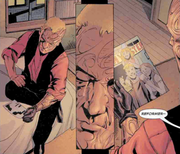 Cluemaster and his teammates in the Injustice League volunteer to join the second Suicide Squad
Suicide Squad
The Suicide Squad, also known as Task Force X , is a name for two fictional organizations in the DC Comics Universe. The first version debuted in The Brave and the Bold #25 , and the second in Legends #3...
, a group sanctioned by the US government, in return for a full pardon of his crimes. The Cluemaster also hopes to make Stephanie proud of him. During the mission, which involves dealing with terrorists and a lovesick gene
Gene
A gene is a molecular unit of heredity of a living organism. It is a name given to some stretches of DNA and RNA that code for a type of protein or for an RNA chain that has a function in the organism. Living beings depend on genes, as they specify all proteins and functional RNA chains...
tic experiment, Cluemaster sees his friends, Big Sir, Clock King
Clock King
Clock King is a title used by two fictional characters, supervillains published by DC Comics. The first Clock King debuted in World's Finest Comics #111 , and was created by France Herron and Lee Elias.-Publication history:...
and Multi-Man
Multi-Man
Multi-Man is a fictional character that has been both a superhero and a supervillain in DC Comics comic books.-Fictional character biography:...
die (though Multi-Man has the power to be reborn again). In the resulting chaotic battle, Cluemaster seemingly saves Major Disaster
Major Disaster
Major Disaster is a former DC Comics supervillain and reluctant amoral superhero. He debuted in Green Lantern # 43.-Fictional character biography:Paul Booker was nothing more than a cheap crook...
's life twice, though the Major admits the situation was confusing. Cluemaster is seen shot many times through the chest. He survives this incident, with a year's recuperation in the hospital and many, many scars. He is encouraged by thoughts of his daughter.

When he gets out and discovers that his daughter has been killed, he takes on the secret identity
Secret identity
A secret identity is an element of fiction wherein a character develops a separate persona , while keeping their true identity hidden. The character also may wear a disguise...
Aaron Black and creates the "Campaign for Culpability", blaming Batman for his involvement in Stephanie's death, saying that she was not the first child working with Batman to die, and that Batman should be brought to justice.

It is later revealed that Stephanie survived the incident that everyone believed had killed her, and spent some time recuperating overseas. It is currently unknown if Cluemaster ever learned about her being alive, or she him.

Robin #177 as planned by Chuck Dixon
Chuck Dixon
Charles "Chuck" Dixon is an American comic book writer, best known for long runs on Batman titles in the 1990s.-Biography:Dixon grew up in the Philadelphia, Pennsylvania, area, reading comics of all genres...
intended to feature Cluemaster, but Dixon's abrupt exodus at DC meant the issue was scrapped.

Cluemaster finally reappears after Stephanie Brown has become the new Batgirl
Batgirl
Batgirl is the name of several fictional characters appearing in comic books published by DC Comics, frequently depicted as female counterparts to the superhero Batman...
. He is revealed to be the man who has been funding the Reapers, a group of young supervillains who have been battling Batgirl.

Cluemaster has no metahuman
Metahuman
Metahuman is a term to describe superhumans in DC Comics' shared universe, the DC Universe. It is roughly synonymous with both mutant and mutate and posthuman in the Wildstorm and Ultimate Marvel Universes. Use of the term in reference to superheroes was coined in 1986 by author George R. R...
powers or abilities. He has a number of plasti-glass pellets attached to the front of his uniform. The pellets contain various offensive weaponry including: blinding incendiary flares, smoke, incapacitating gas and explosives.

In the alternate timeline of the Flashpoint
Flashpoint (comics)
Flashpoint is an American comic book crossover story arc published by DC Comics. Consisting of an eponymous core limited series and a number of tie-in titles, the storyline premiered in May 2011...
event, Cluemaster is imprisoned in military Doom prison. He is subsequently by Eel O'Brian
Plastic Man
Plastic Man is a fictional comic-book superhero originally published by Quality Comics and later acquired by DC Comics. Created by writer-artist Jack Cole, he first appeared in Police Comics #1 ....
inside Cluemaster's body killing him to break Heat Wave
Heat Wave (comics)
Heat Wave is a fictional villain in the DC Universe and a primary foe of the Flash.-Fictional character biography:Born on a farm outside Central City, Mick Rory became fascinated with fire, as a child. This fascination turned into an obsession and one night, he set his family's home ablaze...
out.