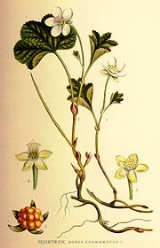 Overview
Rubus chamaemorus is a rhizomatous
Rhizome
In botany and dendrology, a rhizome is a characteristically horizontal stem of a plant that is usually found underground, often sending out roots and shoots from its nodes...
herb
Herbaceous plant
A herbaceous plant is a plant that has leaves and stems that die down at the end of the growing season to the soil level. They have no persistent woody stem above ground...
native to alpine
Alpine tundra
Alpine tundra is a natural region that does not contain trees because it is at high altitude. Alpine tundra is distinguished from arctic tundra, because alpine soils are generally better drained than arctic soils...
and arctic tundra and boreal forest
Taiga
Taiga , also known as the boreal forest, is a biome characterized by coniferous forests.Taiga is the world's largest terrestrial biome. In North America it covers most of inland Canada and Alaska as well as parts of the extreme northern continental United States and is known as the Northwoods...
, producing amber-colored edible fruit similar to the raspberry
Raspberry
The raspberry or hindberry is the edible fruit of a multitude of plant species in the genus Rubus, most of which are in the subgenus Idaeobatus; the name also applies to these plants themselves...
or blackberry
Blackberry
The blackberry is an edible fruit produced by any of several species in the Rubus genus of the Rosaceae family. The fruit is not a true berry; botanically it is termed an aggregate fruit, composed of small drupelets. The plants typically have biennial canes and perennial roots. Blackberries and...
. English common names include cloudberry, bakeapple (in Atlantic Canada
Atlantic Canada
Atlantic Canada is the region of Canada comprising the four provinces located on the Atlantic coast, excluding Quebec: the three Maritime provinces – New Brunswick, Prince Edward Island, and Nova Scotia – and Newfoundland and Labrador...
), Knotberry and Knoutberry (in England), Averin and Evron (in Scotland
Scotland
Scotland is a country that is part of the United Kingdom. Occupying the northern third of the island of Great Britain, it shares a border with England to the south and is bounded by the North Sea to the east, the Atlantic Ocean to the north and west, and the North Channel and Irish Sea to the...
).

Unlike most Rubus species, the cloudberry is dioecious
Dioecious
Dioecy is the property of a group of biological organisms that have males and females, but not members that have organs of both sexes at the same time. I.e., those whose individual members can usually produce only one type of gamete; each individual organism is thus distinctly female or male...
, and fruit production by a female plant requires pollination from a male plant.

What is the average weight of a Goji berry, Lingonberry, Bilberry, sour cherry, blackberry? Even if you only know the answer to one, please let me ...

How much does the average cloudberry weight?
More
x