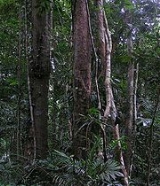 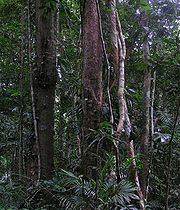 In ecology
Ecology
Ecology is the scientific study of the relations that living organisms have with respect to each other and their natural environment. Variables of interest to ecologists include the composition, distribution, amount , number, and changing states of organisms within and among ecosystems...
, a climax community, or climatic climax community, is a biological community
Community (ecology)
In ecology, a community is an assemblage of two or more populations of different species occupying the same geographical area. The term community has a variety of uses...
of plants and animal
Animal
Animals are a major group of multicellular, eukaryotic organisms of the kingdom Animalia or Metazoa. Their body plan eventually becomes fixed as they develop, although some undergo a process of metamorphosis later on in their life. Most animals are motile, meaning they can move spontaneously and...
s which, through the process of ecological succession
Ecological succession
Ecological succession, is the phenomenon or process by which a community progressively transforms itself until a stable community is formed. It is a fundamental concept in ecology, and refers to more or less predictable and orderly changes in the composition or structure of an ecological community...
— the development of vegetation in an area over time — has reached a steady state. This equilibrium occurs because the climax community is composed of species best adapted to average conditions in that area. The term is sometimes also applied in soil
Soil
Soil is a natural body consisting of layers of mineral constituents of variable thicknesses, which differ from the parent materials in their morphological, physical, chemical, and mineralogical characteristics...
development.

The idea of a single climatic climax, which is defined in relation to regional climate, originated with Frederic Clements
Frederic Clements
Frederic Edward Clements was an American plant ecologist and pioneer in the study of vegetation succession.-Biography:...
in the early 1900s. The first analysis of succession as leading to something like a climax was written by Henry Cowles
Henry Cowles
Henry Cowles is the name of:*Henry B. Cowles , U.S. Representative from New York*Henry Chandler Cowles , American botanist and ecological pioneer...
in 1899, but it was Clements who used the term "climax" to describe the idealized endpoint of succession.


Frederic Clements's use of "climax"

Clements described the successional development of an ecological communitiescomparable to the ontogenetic
Ontogeny
Ontogeny is the origin and the development of an organism – for example: from the fertilized egg to mature form. It covers in essence, the study of an organism's lifespan...
development of individual organism
Organism
In biology, an organism is any contiguous living system . In at least some form, all organisms are capable of response to stimuli, reproduction, growth and development, and maintenance of homoeostasis as a stable whole.An organism may either be unicellular or, as in the case of humans, comprise...
s. Clements suggested only comparisons to very simple organisms. Later ecologists developed this idea that the ecological community is a "superorganism" and even sometimes claimed that communities could be homologous to complex organisms.

Clements's theory sought to define a single climax-type for each area. Arthur Tansley
Arthur Tansley
Sir Arthur George Tansley FRS was an English botanist who was a pioneer in the science of ecology. He obtained his degree in Biological Science in 1896, with specialization in botany and zoology. From the start, he was much influenced by the Danish plant ecologist Eugenius Warming. He championed...
developed this idea with the "polyclimax" -- multiple steady-state end-points, determined by edaphic
Edaphic
Edaphic is a nature related to soil. Edaphic qualities may characterize the soil itself, including drainage, texture, or chemical properties such as pH. Edaphic may also characterize organisms, such as plant communities, where it specifies their relationships with soil...
factors, in a given climatic zone. Clements had called these end-points other tems, not climaxes, and had thought they were not stable, because by definition climax vegetation is best-adapted to the climate of a given area. Henry Gleason
Henry Gleason
Henry Allan Gleason was a noted American ecologist, botanist, and taxonomist, most recognized for his endorsement of the individualistic/open community concept of ecological succession.- Life and work :...
's early challenges to Clements's organism simile, and other of his strategies for describing vegetation, were largely disregarded for several decades until substantially vindicated by research in the 1950s and 1960s (below). Meanwhile, climax theory was deeply incorporated in both theoretical ecology
Theoretical ecology
Theoretical ecology is the scientific discipline devoted to the study of ecological systems using theoretical methods such as simple conceptual models, mathematical models, computational simulations, and advanced data analysis...
and in vegetation management. Clements's terms such as pre-climax, post-climax, plagioclimax and disclimax continued to be used to describe the many communities which persist in states that diverge from the climax ideal for a particular area.

Though the views are sometimes attributed to him, Clements never argued that climax communities must always occur, or that the dominant cause of vegetation is climate, or that the different species in an ecological community are tightly integrated physiologically, or that plant communities have sharp boundaries in time or space. Rather, he employed the idea of a climax community--of the form of vegetation best adapted to some idealized set of environmental conditions--as a conceptual starting point for describing the vegetation in a given area. There are good reasons to believe that the species best adapted to some conditions might appear there, when those conditions occur. But much of Clements's work was devoted to characterizing what happens when those ideal conditions do not occur. In those circumstances, vegetation other than the ideal climax will often occur instead. But those different kinds of vegetation can still be described as deviations from the climax ideal. Therefore Clements developed a very large vocabulary of theoretical terms describing the various possible causes of vegetation, and various non-climax states vegetation adopts as a consequence. His method of dealing with ecological complexity was to define an ideal form of vegetation--the climax community--and describe other forms of vegetation as deviations from that ideal.

Support among ecologists for the climax theory declined, because they found the theory with its many coined terms difficult to apply, because they were dissatisfied how it compared to observed individual organisms, and because better theories developed.

Although Clements recognized that vegetation follows gradients rather than being tightly bound, his rhetorical comparisons of ecological communities to organisms fostered the impression that communities, including the climax, have distinct edges in space and time. Yet Robert Whittaker
Robert Whittaker
Robert Harding Whittaker was a distinguished American plant ecologist, active in the 1950s to the 1970s.Born in Wichita, Kansas, he obtained a B.A. at Washburn Municipal College in Topeka, Kansas, and, following military service, his Ph.D...
's research demonstrated plant species distribute themselves along nutrient and other environmental gradients. Many ecologists saw this as a major reason to stop using the climax concept.

More recent palynological
Palynology
Palynology is the science that studies contemporary and fossil palynomorphs, including pollen, spores, orbicules, dinoflagellate cysts, acritarchs, chitinozoans and scolecodonts, together with particulate organic matter and kerogen found in sedimentary rocks and sediments...
studies showed that modern species assemblages are ephemeral; vegetation in eastern North America
North America
North America is a continent wholly within the Northern Hemisphere and almost wholly within the Western Hemisphere. It is also considered a northern subcontinent of the Americas...
since the last glacial maximum has consisted of several different species assemblages, many of which have no analogues
Analogue (literature)
The term analogue is used in literary history in two related senses:* a work which resembles another in terms of one or more motifs, characters, scenes, phrases or events....
in modern "climax" communities. That would mean, at least, that the climax types for those areas could not be stable to the degree Clements believed they were.

Ultimately, even if succession tends towards a steady state, the time required to achieve this state is unrealistically long; in most cases, external disturbances and environmental change occur so frequently that the realization of a climax community is unlikely, and therefore it has come to be regarded as a less useful concept. Long-term vegetation dynamics are now more often characterized as resulting from the action of stochastic
Stochastic
Stochastic refers to systems whose behaviour is intrinsically non-deterministic. A stochastic process is one whose behavior is non-deterministic, in that a system's subsequent state is determined both by the process's predictable actions and by a random element. However, according to M. Kac and E...
factors.

Despite the overall abandonment of climax theory, during the 1990s use of climax concepts again became more popular among some theoretical ecologists. Many authors and nature-enthusiasts continue to use the term "climax" in a diluted form to refer to what might otherwise be called mature or old-growth communities. The term "climax" has also been adopted as description for a late successional stage for marine macroinvertebrate communities.