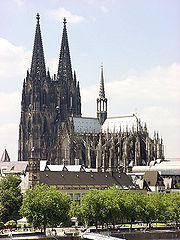 Clemens Ganz is a German organist
Organist
An organist is a musician who plays any type of organ. An organist may play solo organ works, play with an ensemble or orchestra, or accompany one or more singers or instrumental soloists...
.

Ganz studied with Hermann Schroeder
Hermann Schroeder
Hermann Schroeder was a German composer and a Catholic church musician.He spent the greatest part of his life’s work in the Rheinland...
and Josef Zimmermann church music and school music at the Hochschule für Musik in Cologne
Cologne
Cologne is Germany's fourth-largest city , and is the largest city both in the Germany Federal State of North Rhine-Westphalia and within the Rhine-Ruhr Metropolitan Area, one of the major European metropolitan areas with more than ten million inhabitants.Cologne is located on both sides of the...
(A-examination
Church musician (Germany)
Church musician is a music profession in Germany.At present there are about 3600 main job and 25000 second job church musicians in the Protestant and Catholic Church in Germany....
). From 1964–1976 he was cantor
Cantor (church)
A cantor is the chief singer employed in a church with responsibilities for the ecclesiastical choir; also called the precentor....
at St. Marien in Köln-Kalk. From 1971–1998 he taught as professor
Professor
A professor is a scholarly teacher; the precise meaning of the term varies by country. Literally, professor derives from Latin as a "person who professes" being usually an expert in arts or sciences; a teacher of high rank...
at the Hochschule für Musik. From 1985–2001 he was organist of Cologne Cathedral
Cologne Cathedral
Cologne Cathedral is a Roman Catholic church in Cologne, Germany. It is the seat of the Archbishop of Cologne and the administration of the Archdiocese of Cologne. It is renowned monument of German Catholicism and Gothic architecture and is a World Heritage Site...
.