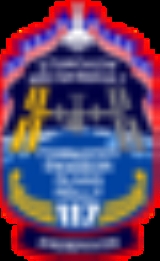 Encyclopedia
Clayton Conrad Anderson (born February 23, 1959 in Omaha
Omaha, Nebraska
Omaha is the largest city in the state of Nebraska, United States, and is the county seat of Douglas County. It is located in the Midwestern United States on the Missouri River, about 20 miles north of the mouth of the Platte River...
, Nebraska
Nebraska
Nebraska is a state on the Great Plains of the Midwestern United States. The state's capital is Lincoln and its largest city is Omaha, on the Missouri River....
) is an American
United States
The United States of America is a federal constitutional republic comprising fifty states and a federal district...
engineer
Engineer
An engineer is a professional practitioner of engineering, concerned with applying scientific knowledge, mathematics and ingenuity to develop solutions for technical problems. Engineers design materials, structures, machines and systems while considering the limitations imposed by practicality,...
and a NASA
NASA
The National Aeronautics and Space Administration is the agency of the United States government that is responsible for the nation's civilian space program and for aeronautics and aerospace research...
astronaut
Astronaut
An astronaut or cosmonaut is a person trained by a human spaceflight program to command, pilot, or serve as a crew member of a spacecraft....
. Launched on STS-117
STS-117
- Crew Notes :The initial crew manifest before the Columbia accident was:Astronaut Mark Polansky was originally slated to pilot this mission, but was moved to STS-116, which he commanded...
, he replaced Sunita Williams
Sunita Williams
Sunita Williams is a United States Naval officer and a NASA astronaut. She was assigned to the International Space Station as a member of Expedition 14 and then joined Expedition 15...
on June 10, 2007 as a member of the ISS Expedition 15
Expedition 15
Expedition 15 was the 15th expedition to the International Space Station . Four crew members participated in the expedition, although for most of the expedition's duration only three were on the station at any one time...
crew.

Anderson joined the Johnson Space Center in 1983 in the Mission Planning and Analysis Division where he performed rendezvous and proximity operations trajectory designs for early Space Shuttle and Space Station missions. In 1988 he moved to the Mission Operations Directorate (MOD) as a Flight Design Manager leading the trajectory design team for the Galileo planetary mission (STS-34) while serving as the backup for the Magellan planetary mission (STS-31). In 1989, Anderson was chosen supervisor of the MOD Ascent Flight Design Section and following reorganization, the Flight Design Engineering Office of the Flight Design and Dynamics Division. In 1993 he was named the Chief of the Flight Design Branch. From 1996 until his selection as an astronaut candidate, Anderson held the post of Manager, Emergency Operations Center, NASA Johnson Space Center.

Selected as an astronaut candidate by NASA in June 1998, he reported for training in August of that year. Training included orientation briefings and tours, numerous scientific and technical briefings, intensive instruction in Shuttle and International Space Station (ISS) systems, physiological training, ground school to prepare for T-38
T-38 Talon
The Northrop T-38 Talon is a twin-engine supersonic jet trainer. It was the world's first supersonic trainer and is also the most produced. The T-38 remains in service as of 2011 in air forces throughout the world....
flight training, as well as learning water and wilderness survival techniques.

In June 2003, Anderson served as an aquanaut
Aquanaut
An Aquanaut is any individual who remains underwater, exposed to the ambient pressure, long enough to come into equilibrium with his or her breathing media. Usually this is done in an underwater habitat on the seafloor for a period equal to or greater than 24 continuous hours without returning to...
during the NEEMO 5 mission aboard the Aquarius
Aquarius (laboratory)
The NOAA Aquarius Reef Base is an underwater habitat located in the Florida Keys National Marine Sanctuary, adjacent to Conch Reef. It is one of the few underwater research facilities in the world dedicated to science...
underwater laboratory
Underwater habitat
Underwater habitats are underwater structures in which people can live for extended periods and carry out most of the basic human functions of a 24-hour day, such as working, resting, eating, attending to personal hygiene, and sleeping...
, living and working underwater for fourteen days.

He was a Mission Specialist on STS-131
STS-131
STS-131 was a NASA Space Shuttle mission to the International Space Station . launched on 5 April 2010 at 6:22 am from Kennedy Space Center's launch pad 39A, and landed at 9:08 am on 20 April 2010 on runway 33 at the Kennedy Space Center's Shuttle Landing Facility...
, launched in April 2010. The primary payload of this mission was a Multi-Purpose Logistics Module loaded with supplies and equipment for the International Space Station.

Anderson was a member of the Expedition 15 crew and spent 152 days on board the International Space Station. He launched to the station aboard Shuttle Atlantis
Atlantis
Atlantis is a legendary island first mentioned in Plato's dialogues Timaeus and Critias, written about 360 BC....
as Mission Specialist 5 for the STS-117 mission on June 8, 2007, and remained on board as a member of the Expedition 16
Expedition 16
Expedition 16 was the 16th expedition to the International Space Station .The first two crew members, Yuri Malenchenko and Peggy Whitson, launched on 10 October 2007, aboard Soyuz TMA-11, and were joined by spaceflight participant Sheikh Muszaphar Shukor, the first Malaysian in space.Expedition 15...
crew before returning to earth aboard Discovery
Space Shuttle Discovery
Space Shuttle Discovery is one of the retired orbiters of the Space Shuttle program of NASA, the space agency of the United States, and was operational from its maiden flight, STS-41-D on August 30, 1984, until its final landing during STS-133 on March 9, 2011...
on mission STS-120
STS-120
-Crew notes:As commander of STS-120, Pamela Melroy became the second woman to command a space shuttle mission. Additionally, the Expedition 16 crew that received STS-120 was commanded by Peggy Whitson, the first female ISS commander...
on November 7, 2007. On return his official title was Mission Specialist 5.

Anderson continued a tradition aboard the International Space Station, started by Michael Lopez-Alegria
Michael Lopez-Alegria
Michael Eladio "LA" López-Alegría b. May 30, 1958, is a Spanish-American astronaut; a veteran of three Space Shuttle missions and one International Space Station mission...
, of conducting daily "trivia" contests with mission control team members on the ground. During Alegria's seven month stay on the station he would routinely call down movie quotes and challenge the team members to determine the movie the quote was from. Towards the end of his mission he changed to music trivia playing a portion of a song and challenging the team to complete the line. Anderson has taken this tradition and put his own personal twist on it, using the "Book of Answers: The New York Public Library
New York Public Library
The New York Public Library is the largest public library in North America and is one of the United States' most significant research libraries...
Telephone Reference Service's Most Unusual and Entertaining Questions". Anderson often played song clips for the ground control team, or specific individuals, most notably when he played the song "(Everything I Do) I Do It for You" by Bryan Adams
Bryan Adams
Bryan Adams, is a Canadian rock singer-songwriter, guitarist, bassist, producer, actor and photographer. Adams has won dozens of awards and nominations, including 20 Juno Awards among 56 nominations. He has also received 15 Grammy Award nominations including a win for Best Song Written...
for his wife on her birthday.

Anderson was born in Omaha, but considers Ashland, Nebraska
Ashland, Nebraska
Ashland is a city in Saunders County, Nebraska, United States. The population was 2,262 at the 2000 census.- History :Ashland is located at the site of a low-water limestone ledge along the bottom of Salt Creek, an otherwise mud-bottomed stream that was a formidable obstacle for wagon trains on the...
to be his hometown. Married to Susan Jane Anderson (née Harreld) of Elkhart, Indiana
Elkhart, Indiana
Elkhart is a city in Elkhart County, Indiana, United States. The city is located east of South Bend, northwest of Fort Wayne, east of Chicago, and north of Indianapolis...
. They have two children; a son, Clayton “Cole” and a daughter, Sutton Marie. His mother, Alice J. Anderson, died in December 2007, shortly after his return to earth. His father, John T. Anderson, is deceased.