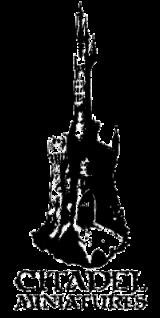 In the past Citadel Miniatures was a separate company but it has become a brand for Games Workshop
Games Workshop
Games Workshop Group plc is a British game production and retailing company. Games Workshop has published the tabletop wargames Warhammer Fantasy Battle and Warhammer 40,000...
miniatures. Although its models are used for the wargaming hobby, the painting
Figure painting (hobby)
Figure painting is the hobby of painting miniature figures and/or model figures, either in its own right or as an adjunct to role-playing games, wargames, military modeling, etc....
of its miniatures (and miniatures in general) is a hobby in itself.

Citadel Miniatures was formed as part of the British
United Kingdom
The United Kingdom of Great Britain and Northern IrelandIn the United Kingdom and Dependencies, other languages have been officially recognised as legitimate autochthonous languages under the European Charter for Regional or Minority Languages...
game company Games Workshop
Games Workshop
Games Workshop Group plc is a British game production and retailing company. Games Workshop has published the tabletop wargames Warhammer Fantasy Battle and Warhammer 40,000...
in early 1979, as announced in White Dwarf
White Dwarf (magazine)
White Dwarf is a magazine published by British games manufacturer Games Workshop. Initially covering a wide variety of fantasy and science-fiction role-playing and board games, particularly the role playing games Dungeons & Dragons, RuneQuest and Traveller...
issue #11:

"Games Workshop and Bryan Ansell
Bryan Ansell
Bryan Ansell is a British role-playing and war game designer. He founded Asgard Miniatures before creating Citadel Miniatures in the late 1970s...
have got together to keep-alive Citadel Miniatures, a new miniatures company that will be manufacturing several ranges of figures. Ral Partha are already in production, but Citadel will also be producing own ranges, including the Fiend Factory figures, Fantasy Adventurers and Fantasy Specials. Citadel will not be limiting production to SF/F figures, but also new ranges of historical wargaming figures".

Originally miniatures were produced using a white metal
White metal
The white metals are any of several light-colored alloys used as a base for plated silverware, ornaments or novelties, as well as any of several lead-base or tin-base alloys used for things like bearings, jewellery, miniature figures, fusible plugs, some medals and metal type.Some of the metals...
alloy
Alloy
An alloy is a mixture or metallic solid solution composed of two or more elements. Complete solid solution alloys give single solid phase microstructure, while partial solutions give two or more phases that may or may not be homogeneous in distribution, depending on thermal history...
including lead
Lead
Lead is a main-group element in the carbon group with the symbol Pb and atomic number 82. Lead is a soft, malleable poor metal. It is also counted as one of the heavy metals. Metallic lead has a bluish-white color after being freshly cut, but it soon tarnishes to a dull grayish color when exposed...
, although in 1987 Citadel began to produce plastic
Plastic
A plastic material is any of a wide range of synthetic or semi-synthetic organic solids used in the manufacture of industrial products. Plastics are typically polymers of high molecular mass, and may contain other substances to improve performance and/or reduce production costs...
miniatures as well under the name "Psychostyrene" and "Drastik Plastik". These were made of a harder plastic than other plastic miniatures at time and allowed for greater detailed sculpting. Citadel has continued to produce white metal miniatures as the economics of plastic make it only suitable for large runs. Some models are a combination of both materials, with the arm-less bodies and heads metal and the arms, weapons and other accessories plastic.

In 1997 Citadel switched to a lead free white metal because of concerns about lead poisoning particularly in children.

Most of the models created by Citadel require some form of construction after purchase. With smaller models this usually involves attaching arms, weapons and the base. Larger models come in many pieces and require more construction.

On May 16th, 2011, Games Workshop announced a new range of Citadel models known as Citadel Finecast. The new range of models are made out of high-quality resin, and were released on the 28th May 2011. All of the models that have been shown are resin versions of Citadel's lead-free white metal models, but are much lighter and more durable than their metal equivalents, as well as being of a higher level of detail than any other Citadel miniature currently available. However, it has arisen that maybe the quality of these models aren't actually as good as Games Workshop intended. As many people have pointed out, they have many flaws. Usually the models come with defects in them, such as bent weapons, lots of additional flash etc.

From 1979 to 1984 Citadel had a reciprocal distribution and manufacturing deal with Ral Partha to bring each others products to Britain and North America respectively.

Citadel has also produced and distributed miniatures under other names:


Over the years, as well as producing their own original miniatures, they have produced licenced ranges based on characters from games, movies, TV and books. These included figures based on RuneQuest
RuneQuest
RuneQuest is a fantasy role-playing game first published in 1978 by Chaosium, created by Steve Perrin and set in Greg Stafford's mythical world of Glorantha. RuneQuest was notable for its original gaming system and for its verisimilitude in adhering to an original fantasy world...
, Fighting Fantasy
Fighting Fantasy
Fighting Fantasy is a series of single-player fantasy roleplay gamebooks created by Steve Jackson and Ian Livingstone. The first volumes in the series were published by Puffin in 1982, with the rights to the franchise eventually being purchased by Wizard Books in 2002...
, Judge Dredd
Judge Dredd
Judge Joseph Dredd is a comics character whose strip in the British science fiction anthology 2000 AD is the magazine's longest running . Dredd is an American law enforcement officer in a violent city of the future where uniformed Judges combine the powers of police, judge, jury and executioner...
, Doctor Who
Doctor Who
Doctor Who is a British science fiction television programme produced by the BBC. The programme depicts the adventures of a time-travelling humanoid alien known as the Doctor who explores the universe in a sentient time machine called the TARDIS that flies through time and space, whose exterior...
, Paranoia
Paranoia (role-playing game)
Paranoia is a dystopian science-fiction tabletop role-playing game originally designed and written by Greg Costikyan, Dan Gelber, and Eric Goldberg, and first published in 1984 by West End Games. Since 2004 the game has been published under licence by Mongoose Publishing...
, Eternal Champion
Eternal Champion
The Eternal Champion is a fictional creation of the author Michael Moorcock and is a recurrent feature in many of his novels.-About the Eternal Champion:...
, Dungeons and Dragons, Advanced Dungeons and Dragons, Traveller
Traveller (role-playing game)
Traveller is a series of related science fiction role-playing games, the first published in 1977 by Game Designers' Workshop and subsequent editions by various companies remaining in print to this day. The game was inspired from such classic science fiction stories as the Dumarest saga series by...
, Star Trek
Star Trek
Star Trek is an American science fiction entertainment franchise created by Gene Roddenberry. The core of Star Trek is its six television series: The Original Series, The Animated Series, The Next Generation, Deep Space Nine, Voyager, and Enterprise...
, Lone Wolf
Lone Wolf (gamebooks)
Lone Wolf is a series of 28 gamebooks, created by Joe Dever and initially illustrated by Gary Chalk. The series began publishing in July 1984 and sold more than 10.2 million copies worldwide....
and The Lord of the Rings
The Lord of the Rings
The Lord of the Rings is a high fantasy epic written by English philologist and University of Oxford professor J. R. R. Tolkien. The story began as a sequel to Tolkien's earlier, less complex children's fantasy novel The Hobbit , but eventually developed into a much larger work. It was written in...
and The Hobbit
The Hobbit
The Hobbit, or There and Back Again, better known by its abbreviated title The Hobbit, is a fantasy novel and children's book by J. R. R. Tolkien. It was published on 21 September 1937 to wide critical acclaim, being nominated for the Carnegie Medal and awarded a prize from the New York Herald...
. Games Workshop re-won the Lord of the Rings licence, allowing them to make The Lord of the Rings Strategy Battle Game
The Lord of the Rings Strategy Battle Game
The Lord of the Rings Strategy Battle Game , and often referred to by players as Lord of the Rings, is a tabletop miniature wargame produced by Games Workshop . It is based on The Lord of the Rings film trilogy directed by Peter Jackson, and the book that inspired it, written by J. R. R...
miniatures to tie-in with the trilogy of films released by New Line Cinema
New Line Cinema
New Line Cinema, often simply referred to as New Line, is an American film studio. It was founded in 1967 by Robert Shaye and Michael Lynne as a film distributor, later becoming an independent film studio. It became a subsidiary of Time Warner in 1996 and was merged with larger sister studio Warner...
, and have extended the range to include characters based on the actual writings of J. R. R. Tolkien
J. R. R. Tolkien
John Ronald Reuel Tolkien, CBE was an English writer, poet, philologist, and university professor, best known as the author of the classic high fantasy works The Hobbit, The Lord of the Rings, and The Silmarillion.Tolkien was Rawlinson and Bosworth Professor of Anglo-Saxon at Pembroke College,...
.

Citadel Miniatures sometimes release limited edition models of specific or unusual characters, such as Thrud the Barbarian
Thrud the Barbarian
Thrud the Barbarian is a comics character created by Carl Critchlow in 1981. Although Thrud himself is a parody of Conan the Barbarian, particularly as depicted in the Arnold Schwarzenegger films, inspiration for the character's adventures and adversaries has been drawn from several fantasy...
, Ian Livingstone
Ian Livingstone
Ian Livingstone OBE is an English fantasy author and entrepreneur. He is a co-writer of the first Fighting Fantasy gamebook, The Warlock of Firetop Mountain, and co-founder of Games Workshop....
, drunken Space Marines dressed in Christmas outfits and several representing Grombrindal, the white-bearded logo of White Dwarf
White Dwarf (magazine)
White Dwarf is a magazine published by British games manufacturer Games Workshop. Initially covering a wide variety of fantasy and science-fiction role-playing and board games, particularly the role playing games Dungeons & Dragons, RuneQuest and Traveller...
magazine.