Encyclopedia
In cryptography
Cryptography
Cryptography is the practice and study of techniques for secure communication in the presence of third parties...
, ciphertext (or cyphertext) is the result of encryption
Encryption
In cryptography, encryption is the process of transforming information using an algorithm to make it unreadable to anyone except those possessing special knowledge, usually referred to as a key. The result of the process is encrypted information...
performed on plaintext
Plaintext
In cryptography, plaintext is information a sender wishes to transmit to a receiver. Cleartext is often used as a synonym. Before the computer era, plaintext most commonly meant message text in the language of the communicating parties....
using an algorithm, called a cipher
Cipher
In cryptography, a cipher is an algorithm for performing encryption or decryption — a series of well-defined steps that can be followed as a procedure. An alternative, less common term is encipherment. In non-technical usage, a “cipher” is the same thing as a “code”; however, the concepts...
. Ciphertext is also known as encrypted or encoded information because it contains a form of the original plaintext that is unreadable by a human or computer without the proper cipher to decrypt it. Decryption, the inverse of encryption, is the process of turning ciphertext into readable plaintext. Ciphertext is not to be confused with codetext because the latter is a result of a Code
Code (cryptography)
In cryptography, a code is a method used to transform a message into an obscured form, preventing those who do not possess special information, or key, required to apply the transform from understanding what is actually transmitted. The usual method is to use a codebook with a list of common...
, not a cipher.

be the encryption cipher, where

is a secret key. Alice must first transform the plaintext into ciphertext,

, in order to securely send the message to Bob.

Both Alice and Bob must know the choice of key,

, or else the ciphertext is useless. Once the message is encrypted as ciphertext, Alice can safely transmit it to Bob (assuming no one else knows the key). In order to read Alice's message, Bob must decrypt the ciphertext using

which is known as the decryption cipher,

Historical pen and paper ciphers used in the past are sometimes known as classical cipher
Classical cipher
A cipher is a means of concealing a message, where letters of the message are substituted or transposed for other letters, letter pairs, and sometimes for many letters. In cryptography, a classical cipher is a type of cipher that was used historically but now has fallen, for the most part, into...
s. They include:


Historical ciphers are not generally used as a standalone encryption solution because they are quite easy to crack. Many of the classical ciphers can be cracked using brute force
Brute force attack
In cryptography, a brute-force attack, or exhaustive key search, is a strategy that can, in theory, be used against any encrypted data. Such an attack might be utilized when it is not possible to take advantage of other weaknesses in an encryption system that would make the task easier...
or by analyzing only ciphertext with the exception of the one-time pad.

Modern ciphers are more secure than classical ciphers and are designed to withstand a wide range of attacks. An attacker should not be able to find the key used in a modern cipher, even if he knows any amount of plaintext and corresponding ciphertext. Modern encryption methods can be divided into the following categories:


In a symmetric key algorithm (e.g., DES
Data Encryption Standard
The Data Encryption Standard is a block cipher that uses shared secret encryption. It was selected by the National Bureau of Standards as an official Federal Information Processing Standard for the United States in 1976 and which has subsequently enjoyed widespread use internationally. It is...
and AES
Advanced Encryption Standard
Advanced Encryption Standard is a specification for the encryption of electronic data. It has been adopted by the U.S. government and is now used worldwide. It supersedes DES...
), the sender and receiver must have a shared key set up in advance and kept secret from all other parties; the sender uses this key for encryption, and the receiver uses the same key for decryption. In an asymmetric key algorithm (e.g., RSA), there are two separate keys: a public key is published and enables any sender to perform encryption, while a private key is kept secret by the receiver and enables only him to perform correct decryption. 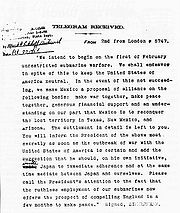 Cryptanalysis is the study of methods for obtaining the meaning of encrypted information, without access to the secret information that is normally required to do so. Typically, this involves knowing how the system works and finding a secret key. Cryptanalysis is also referred to as codebreaking or cracking the code
Password cracking
Password cracking is the process of recovering passwords from data that has been stored in or transmitted by a computer system. A common approach is to repeatedly try guesses for the password...
. Ciphertext is generally the easiest part of a cryptosystem
Cryptosystem
There are two different meanings of the word cryptosystem. One is used by the cryptographic community, while the other is the meaning understood by the public.- General meaning :...
to obtain and therefore is a important part of cryptanalysis. Depending on what information is available and what type of cipher is being analyzed, crypanalysts can follow one or more attack model
Attack model
Attack models or attack types specify how much information a cryptanalyst has access to when cracking an encrypted message...
s to crack a cipher.

The ciphertext-only attack model is the weakest attack because it implies that the cryptanalyst has nothing but ciphertext. Modern ciphers rarely fail under this attack.