Encyclopedia
The ciliary ganglion is a parasympathetic
Parasympathetic nervous system
The parasympathetic nervous system is one of the two main divisions of the autonomic nervous system . The ANS is responsible for regulation of internal organs and glands, which occurs unconsciously...
ganglion
Ganglion
In anatomy, a ganglion is a biological tissue mass, most commonly a mass of nerve cell bodies. Cells found in a ganglion are called ganglion cells, though this term is also sometimes used to refer specifically to retinal ganglion cells....
located in the posterior orbit
Orbit (anatomy)
In anatomy, the orbit is the cavity or socket of the skull in which the eye and its appendages are situated. "Orbit" can refer to the bony socket, or it can also be used to imply the contents...
. It measures 1–2 millimeters in diameter and contains approximately 2,500 neuron
Neuron
A neuron is an electrically excitable cell that processes and transmits information by electrical and chemical signaling. Chemical signaling occurs via synapses, specialized connections with other cells. Neurons connect to each other to form networks. Neurons are the core components of the nervous...
s. Preganglionic axon
Axon
An axon is a long, slender projection of a nerve cell, or neuron, that conducts electrical impulses away from the neuron's cell body or soma....
s from the Edinger-Westphal nucleus
Edinger-Westphal nucleus
The Edinger-Westphal nucleus is the accessory parasympathetic cranial nerve nucleus of the oculomotor nerve , supplying the constricting muscles of the iris...
travel along the oculomotor nerve
Oculomotor nerve
The oculomotor nerve is the 3rd of 12 paired cranial nerves. It enters the orbit via the superior orbital fissure and controls most of the eye's movements, including constriction of the pupil and maintaining an open eyelid by innervating the Levator palpebrae superiors muscle. The optic nerve is...
and form synapse
Synapse
In the nervous system, a synapse is a structure that permits a neuron to pass an electrical or chemical signal to another cell...
s with these cells
Cell (biology)
The cell is the basic structural and functional unit of all known living organisms. It is the smallest unit of life that is classified as a living thing, and is often called the building block of life. The Alberts text discusses how the "cellular building blocks" move to shape developing embryos....
. The postganglionic axons run in the short ciliary nerves and innervate two eye
Human eye
The human eye is an organ which reacts to light for several purposes. As a conscious sense organ, the eye allows vision. Rod and cone cells in the retina allow conscious light perception and vision including color differentiation and the perception of depth...
muscles: 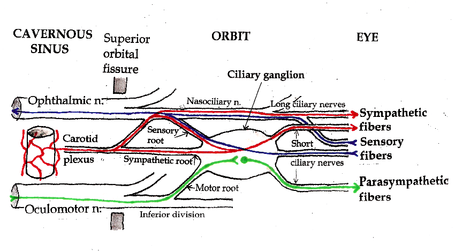 Diseases of the ciliary ganglion produce a tonic pupil. This is a pupil that does not react to light (it is “fixed”) and has an abnormally slow and prolonged response to attempted near vision (accommodation
Accommodation (eye)
Accommodation is the process by which the vertebrate eye changes optical power to maintain a clear image on an object as its distance changes....
).

When a patient with an Adie pupil attempts to focus on a nearby object, the pupil (which would normally constrict rapidly) constricts slowly. On close inspection, the constricted pupil is not perfectly round. When the patient focuses on a more distant object (say the far side of the room), the pupil (which would normally dilate immediately) remains constricted for several minutes, and then slowly dilates back to the expected size.

Tonic pupils are fairly common – they are seen in roughly 1 out of every 500 people. A patient with anisocoria (one pupil bigger than the other) whose pupil does not react to light (does not constrict when exposed to bright light) most likely has Adie syndrome – idiopathic degeneration of the ciliary ganglion.

The strange behavior of tonic pupils was first explained by Irene Loewenfeld in 1979. The ciliary ganglion contain many more nerve fibers directed to the ciliary muscle than nerve fibers directed to the constrictor pupillae – roughly twenty times more. The ciliary muscle is also more massive than the constrictor pupillae, again by a factor of twenty. Based on these observations, Loewenfeld proposed an explanation of the tonic pupil. She noted that pathological destruction of nerve cells in the ciliary ganglion that is found in all cases of Adie pupil. In her own words :

Loewenfeld’s theory is now generally accepted. It explains the defining features of a tonic pupil:
The pupil does not react to light. The original light-reaction neurons have been destroyed.
Tonic constriction with attempted near vision. Aberrant regeneration of nerve fibers intended for the ciliary muscle causes abnormal, tonic contraction of the pupil with accommodation.
Segmental iris constriction. When carefully examined under magnification, the iris does not constrict uniformly with attempted near vision. Only the re-innervated segments contract, producing a slightly irregular contour to the pupil.
[Denervation supersensitivity]. Like any denervated muscle, the iris becomes supersensitive to its normal neurotransmitter (in this case, acetylcholine). Very weak solutions of cholinergic substances such as pilocarpine (that have no effect on the normal iris) cause the denervated iris to constrict.

Early in the course of Adie syndrome (when the cells of the ciliary ganglion have been destroyed, but before regeneration has occurred) the pupil will be fixed and dilated. The sphincter pupillae will be paralyzed. There will be no response to accommodation – the ciliary muscle is also paralyzed.

With aberrant nerve regeneration, the pupil will remain fixed, but it will constrict with attempted near vision. The constriction will be abnormal (“tonic”).

Late in the course of Adie syndrome, the pupil becomes small (as all pupils do with old age). It will still be “fixed” (it will not constrict to bright light) and it will continue to show abnormal, tonic constriction with attempted near vision.

The Adie pupil does not react to light, but it does react to accommodation. This is an example of “light-near dissociation”. All other causes of light-near dissociation involve the brainstem. They do not involve the ciliary ganglion, and they do not produce a tonic pupil. Irene Loewenfeld is generally credited for being the first physiologist to make this distinction.

- "A deeper dissection of the right orbit from a superior approach." - "Branches of Trigeminal Nerve, Lateral View"
The source of this article is wikipedia, the free encyclopedia.  The text of this article is licensed under the GFDL.