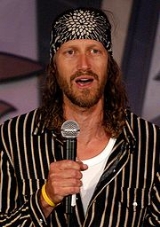 Encyclopedia
Christopher Heyerdahl is a Canadian actor who has had roles in many prominent television shows and movies. He is 6 in 4 in (1.93 m) tall.

Heyerdahl was born in the mountains of British Columbia and is of Norwegian and Scottish
Scottish people
The Scottish people , or Scots, are a nation and ethnic group native to Scotland. Historically they emerged from an amalgamation of the Picts and Gaels, incorporating neighbouring Britons to the south as well as invading Germanic peoples such as the Anglo-Saxons and the Norse.In modern use,...
descent. The late Thor Heyerdahl
Thor Heyerdahl
Thor Heyerdahl was a Norwegian ethnographer and adventurer with a background in zoology and geography. He became notable for his Kon-Tiki expedition, in which he sailed by raft from South America to the Tuamotu Islands...
was his father's cousin.

He played the part of the demon Alastair in three episodes of Supernatural
Supernatural (TV series)
Supernatural is an American supernatural and horror television series created by Eric Kripke, which debuted on September 13, 2005 on The WB, and is now part of The CW's lineup. Starring Jared Padalecki as Sam Winchester and Jensen Ackles as Dean Winchester, the series follows the brothers as they...
. He also played the part of Zor-El in the television series Smallville
Smallville (TV series)
Smallville is an American television series developed by writers/producers Alfred Gough and Miles Millar based on the DC Comics character Superman, originally created by Jerry Siegel and Joe Shuster. The television series was initially broadcast by The WB Television Network , premiering on October...
, as well as playing John Druitt and Bigfoot in the series Sanctuary.

He had a role in the feature film New Moon
New Moon (2009 film)
The Twilight Saga: New Moon, commonly referred to as New Moon, is a 2009 American romance fantasy-vampire film based on Stephenie Meyer's 2006 novel New Moon. It is the second film in The Twilight Saga film series and is the sequel to 2008's Twilight. Summit Entertainment greenlit the sequel in...
, an adaptation of Stephenie Meyer
Stephenie Meyer
Stephenie Meyer is an American author known for her vampire romance series Twilight. The Twilight novels have gained worldwide recognition and sold over 100 million copies globally, with translations into 37 different languages...
's second book in her Twilight Saga. In this film, he played a vampire
Vampire
Vampires are mythological or folkloric beings who subsist by feeding on the life essence of living creatures, regardless of whether they are undead or a living person...
, Marcus, who is part of a powerful Italian family called the Volturi.