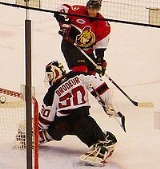 Encyclopedia
Christoph Schubert is a German professional ice hockey
Ice hockey
Ice hockey, often referred to as hockey, is a team sport played on ice, in which skaters use wooden or composite sticks to shoot a hard rubber puck into their opponent's net. The game is played between two teams of six players each. Five members of each team skate up and down the ice trying to take...
player. Schubert is currently playing for Hamburg Freezers
Hamburg Freezers
The Hamburg Freezers are a member of the Deutsche Eishockey Liga that play their games in Hamburg, Germany. Originally known as the Munich Barons from 1999 until 2002, team owner Philip Anschutz relocated the franchise to Hamburg for financial reasons on 3 June 2002, and renamed the team the...
in Deutsche Eishockey Liga (DEL). Schubert played over 300 games in the National Hockey League
National Hockey League
The National Hockey League is an unincorporated not-for-profit association which operates a major professional ice hockey league of 30 franchised member clubs, of which 7 are currently located in Canada and 23 in the United States...
(NHL) for the Atlanta Thrashers
Atlanta Thrashers
The Atlanta Thrashers were a professional ice hockey team based in Atlanta, Georgia, United States. Atlanta was granted a franchise in the National Hockey League on June 25, 1997, and became the league's 28th franchise when it began play in the 1999–2000 NHL season...
and Ottawa Senators
Ottawa Senators
The Ottawa Senators are a professional ice hockey team based in Ottawa, Ontario, Canada. They are members of the Northeast Division of the Eastern Conference of the National Hockey League...
from 2005–2010.

Schubert was drafted 127th overall in the 2001 NHL Entry Draft
2001 NHL Entry Draft
The 2001 NHL Entry Draft was held on June 23–24, 2001 at the National Car Rental Center in Sunrise, Florida.-Round one:-Round two:-Round three:-Round four:-Round five:-Round six:-Round seven:-Round eight:-Round nine:...
by the Ottawa Senators. He is generally seen as a competent defenceman and a checking forward with some physical upside.

One of his greatest assets is his shot, which was measured at over 100 mph in the 2005–06 Senators' Super Skills Competition, giving him the second-hardest shot in Senators team history behind former teammate Zdeno Chara
Zdeno Chára
Zdeno Chára is a Slovak professional ice hockey defenseman. He is the captain of the Boston Bruins of the National Hockey League and won the Norris Trophy while playing for them in 2008–09. At 6 ft 9 , he is the tallest player ever to play in the NHL...
.

He recorded his first career NHL goal on future teammate Martin Gerber
Martin Gerber
Martin Gerber is a Swiss professional ice hockey goaltender currently playing for the Växjö Lakers Hockey of the Elitserien...
vs. the Carolina Hurricanes
Carolina Hurricanes
The Carolina Hurricanes are a professional ice hockey team based in Raleigh, North Carolina, USA. They are members of the Southeast Division of the Eastern Conference of the National Hockey League , and play their home games at the 18,680-seat RBC Center...
on November 22, 2005. In the 2006–07 Super Skills Competition for the Senators, despite losing to Mike Fisher for the hardest shot, he achieved first place in the puck control relay portion.

At the beginning of the 2009–10
2009–10 NHL season
The 2009–10 NHL season was the 93rd season of operation of the National Hockey League , and the 100th season since the founding of the predecessor National Hockey Association . It ran from October 1, 2009, including four games in Europe on October 2 and 3—until April 11, 2010, with the 2010...
season, on October 2, Schubert was claimed off waivers by the Atlanta Thrashers
Atlanta Thrashers
The Atlanta Thrashers were a professional ice hockey team based in Atlanta, Georgia, United States. Atlanta was granted a franchise in the National Hockey League on June 25, 1997, and became the league's 28th franchise when it began play in the 1999–2000 NHL season...
. Schubert remained on the Thrashers roster primarily as a depth player and in 47 games scored 2 goals and 7 points.

In the following 2010–11
2010–11 Deutsche Eishockey Liga season
-Regular season:GP = Games Played, W = Wins, OTW = Overtime win, SOW = Shootout win, OTL = Overtime loss, SOL = Shootout loss, L = LossColor code:     = Direct Playoff qualification,     = Playoff qualification round,     = No playoff -Playoff...
season, Schubert was unable to garner another NHL contract and after 8 years returned to Europe, signing with Frölunda HC
Frölunda HC
Frölunda Hockey Club, also known as the Frölunda Indians, are a Swedish professional ice hockey club based in Gothenburg. They are currently playing in the highest Swedish league, Elitserien, where they have played the majority of the seasons during its existence. The last time they played in the...
of the Swedish Elitserien
Elitserien
Elitserien, is a professional ice hockey league composed of twelve teams in Sweden...
on September 15, 2010. Contributing just 4 assists in 23 games with the Indians, Schubert was mutually released from his contract and returned to his native Germany, signing a two-year deal with the Hamburg Freezers on December 8, 2010.

Schubert played for the German national team
German national ice hockey team
The German men's national ice hockey team first participated in serious international competition at the 1911 European Hockey Championship. When Germany was split after World War II, a separate East German national ice hockey team existed until 1990...
in the 2006 Winter Olympics
2006 Winter Olympics
The 2006 Winter Olympics, officially known as the XX Olympic Winter Games, was a winter multi-sport event which was celebrated in Turin, Italy from February 10, 2006, through February 26, 2006. This marked the second time Italy hosted the Olympic Winter Games, the first being the VII Olympic Winter...
in Turin
Turin
Turin is a city and major business and cultural centre in northern Italy, capital of the Piedmont region, located mainly on the left bank of the Po River and surrounded by the Alpine arch. The population of the city proper is 909,193 while the population of the urban area is estimated by Eurostat...
, Italy
Italy
Italy , officially the Italian Republic languages]] under the European Charter for Regional or Minority Languages. In each of these, Italy's official name is as follows:;;;;;;;;), is a unitary parliamentary republic in South-Central Europe. To the north it borders France, Switzerland, Austria and...
. The team finished out of the medal round.