Encyclopedia
China Motor Bus Company Ltd. , often abbreviated as CMB, was the first motor bus
Bus
A bus is a road vehicle designed to carry passengers. Buses can have a capacity as high as 300 passengers. The most common type of bus is the single-decker bus, with larger loads carried by double-decker buses and articulated buses, and smaller loads carried by midibuses and minibuses; coaches are...
company in Hong Kong
Hong Kong
Hong Kong is one of two Special Administrative Regions of the People's Republic of China , the other being Macau. A city-state situated on China's south coast and enclosed by the Pearl River Delta and South China Sea, it is renowned for its expansive skyline and deep natural harbour...
, and was responsible for the introduction of double-decker bus
Double-decker bus
A double-decker bus is a bus that has two storeys or 'decks'. Global usage of this type of bus is more common in outer touring than in its intra-urban transportion role. Double-decker buses are also commonly found in certain parts of Europe, Asia, and former British colonies and protectorates...
es to Hong Kong Island.

It is now mainly involved in property development after its franchise
Government-granted monopoly
In economics, a government-granted monopoly is a form of coercive monopoly by which a government grants exclusive privilege to a private individual or firm to be the sole provider of a good or service; potential competitors are excluded from the market by law, regulation, or other mechanisms of...
lapsed in 1998.

Ngan Shing Kwan together with Wong Yiu Nam started in business in 1924 to provide services on Kowloon Peninsula
Kowloon Peninsula
The Kowloon Peninsula is a peninsula that forms the southern part of the main landmass in the territory of Hong Kong. The Kowloon Peninsula and the area of New Kowloon are collectively known as Kowloon....
. Ngan and Wong began their transport career as rickshaw pullers on Nathan Road in the 1920s and established the company in 1933, when they received the exclusive
Exclusive right
In Anglo-Saxon law, an exclusive right is a de facto, non-tangible prerogative existing in law to perform an action or acquire a benefit and to permit or deny others the right to perform the same action or to acquire the same benefit. A "prerogative" is in effect an exclusive right...
bus franchise from the Government of Hong Kong
Government of Hong Kong
The Government of the Hong Kong Special Administrative Region of the People's Republic of China, commonly the Hong Kong Government, is led by the Chief Executive as Head of the Government, who is also the head of the Hong Kong SAR...
to operate routes on Hong Kong Island
Hong Kong Island
Hong Kong Island is an island in the southern part of the Hong Kong Special Administrative Region. It has a population of 1,289,500 and its population density is 16,390/km², as of 2008...
.

After the Second World War
World War II
World War II, or the Second World War , was a global conflict lasting from 1939 to 1945, involving most of the world's nations—including all of the great powers—eventually forming two opposing military alliances: the Allies and the Axis...
, the network of CMB's routes expanded with exploding population on the island. New buses were purchased to increase ridership. Since mid-1970s, CMB buses were traditionally painted with a buff
Buff (colour)
Buff is a pale yellow-brown colour that got its name from the colour of buff leather.Displayed on the right is the colour buff.EtymologyAccording to the Oxford English Dictionary, buff as a descriptor of a colour was first used in the London Gazette of 1686, describing a uniform to be "A Red Coat...
upper body and a blue lower body livery. CMB adopt the policy to improve its service during 1970s, including introducing the first type of rear-engine bus (Daimler Fleetline
Daimler Fleetline
The Daimler Fleetline is a rear-engined double-decker bus chassis built between 1960 and 1973 in Coventry, Warwickshire, England, and from 1973 until 1980 in Farington, Lancashire, England. However, the last complete vehicle did not enter service until 1983...
) and reforming the route number system. In 1976 CMB has earned over $20 million HK dollars, the highest in the company history.

With the opening of the MTR
MTR
Mass Transit Railway is the rapid transit railway system in Hong Kong. Originally opened in 1979, the system now includes 211.6 km of rail with 155 stations, including 86 railway stations and 69 light rail stops...
Island Line
Island Line (MTR)
The Island Line is one of 10 lines of the MTR, the mass transit system in Hong Kong. It runs from Sheung Wan in the Central and Western District to Chai Wan in the Eastern District. The line first opened in 31 May 1985...
in the 1985, and CMB's reputation of outdated ethos and poor services over the years, ridership on CMB declined. On 29/30 November 1989, CMB employees started a massive strike, after broken negotiations on their pensions funds. During the strike, all CMB services on the island were halted, to the extent that the government was forced to use police vehicles to facilitate commuting
Commuting
Commuting is regular travel between one's place of residence and place of work or full time study. It sometimes refers to any regular or often repeated traveling between locations when not work related.- History :...
to and from the Southern District
Southern District, Hong Kong
The Southern District is one of the 18 districts of Hong Kong. It is located in the southern part of Hong Kong Island. It had a population of 290,240 in 2001. This district has the fourth lowest population of Hong Kong.-Geography:...
. After the incident, the relationship between CMB and the government worsened, leading to the government to adopt more directive policies in respect of CMB. 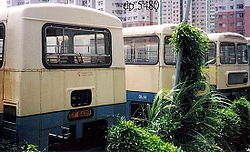 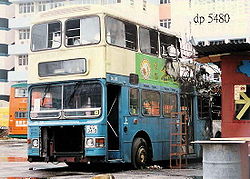 Meanwhile, competitors such as Citybus
Citybus (Hong Kong)
Citybus Limited is one of the three major bus operators in Hong Kong. It provides both franchised and non-franchised bus service. The franchised route network serves mainly Hong Kong Island, cross-harbour routes , Ocean Park, North Lantau and Hong Kong International Airport...
had successfully lured passengers from CMB's franchised routes to their own residential routes. The establishment of route 37R as a residential route by Citybus illustrates this fact. The service provided more comfortable seats, air-conditioned fleet, and a more direct route (via Aberdeen Tunnel
Aberdeen Tunnel
Aberdeen Tunnel is a two-tube tunnel linking Happy Valley and Wong Chuk Hang near Aberdeen on the Hong Kong Island, Hong Kong. It shortens the travel time between the north and the south of the Hong Kong Island. It connects the Wong Chuk Hang Road in the south, and Canal Road Flyover in the...
) from Chi Fu Fa Yuen to Central
Central, Hong Kong
Central is the central business district of Hong Kong. It is located in Central and Western District, on the north shore of Hong Kong Island, across Victoria Harbour from Tsim Sha Tsui, the southernmost point of Kowloon Peninsula...
. Citybus was able to compete against CMB by charging only the fare of non-air-conditioned, uncomfortable and indirect CMB counterparts like routes 40 and 37 (which took Pok Fu Lam Road
Pok Fu Lam Road
Pokfulam Road, or Pok Fu Lam Road, is a four-lane road in Hong Kong. Built on Hong Kong Island, the road runs between Sai Ying Pun and Wah Fu, through Pok Fu Lam....
instead). The residential route was later converted into a franchise route, 37M, that still continued to be operated by Citybus.

In 1993 and 1995, the government had 26 and 14 CMB routes respectively removed and put into public tender, with Citybus taking over those routes. Citybus expanded its market of Hong Kong Island from CMB during these years, especially in the commercial areas like Central, Wanchai and Causeway Bay
Causeway Bay
Causeway Bay is a heavily built-up area of Hong Kong, People's Republic of China, located on the Hong Kong Island, and covering parts of Wan Chai and Eastern districts. The Chinese name is also romanized as Tung Lo Wan as in Tung Lo Wan Road...
. More CMB passengers in these areas turned to Citybus, and CMB had more and more routes without profits. CMB started to give up its remaining bus service business from the mid-1990s, and the company eventually lost its franchise in 1998, which was taken over by New World First Bus
New World First Bus
New World First Bus Services Limited , abbreviated as First Bus and "NWFB", is the third largest public bus operator in Hong Kong.NWFB was established in 1998, taking over China Motor Bus's franchise on 1 September 1998 to provide bus services on Hong Kong Island together with Citybus...
.

Since losing its franchise, its main business focus shifted to real estate
Real estate
In general use, esp. North American, 'real estate' is taken to mean "Property consisting of land and the buildings on it, along with its natural resources such as crops, minerals, or water; immovable property of this nature; an interest vested in this; an item of real property; buildings or...
, by developing former bus depot properties which it owned. Meanwhile, the company is operating a free shuttle bus service between Island Place (one of the CMB's real estate developments) near the North Point MTR station
North Point (MTR)
North Point is a station on the Hong Kong MTR Island Line and the western terminus of the Tseung Kwan O Line. The livery of the station is tomato orange.-History:This station was opened in 1985 upon the completion of the Island Line...
and North Point Government Offices. A Volvo B6LE, acquired from Citybus, along with eight Dennis Dart
Dennis Dart
The Dennis Dart is a rear-engined midibus built by Dennis in the United Kingdom. More than 11,000 were built during 18 years of production....
"Coach Express" are currently utilised for this service.

Besides the eight Dennis Dart
Dennis Dart
The Dennis Dart is a rear-engined midibus built by Dennis in the United Kingdom. More than 11,000 were built during 18 years of production....
Coach Express retained to operate the free shuttle service mentioned above, most of the fleet was transferred to New World First Bus in 1998 after the end of CMB's franchise. Two Volvo Olympian
Volvo Olympian
The Volvo Olympian was a rear-engine double decker bus built by Volvo at Irvine, North Ayrshire, Scotland. It was first built in 1992 and entered production in March 1993, replacing the Leyland Olympian....
air-conditioned buses were sold to Citybus at half price in 2002 (http://www.citybus.com.hk/eng/GenInfo/Fleet/fleet_detail.asp?fleet_id=21), and Citybus, in turn, gave up one of its single-deck buses (the Volvo B6LE now used in the shuttle) to CMB for free.

Some of the buses transferred to New World First Bus were even shipped to Australia
Australia
Australia , officially the Commonwealth of Australia, is a country in the Southern Hemisphere comprising the mainland of the Australian continent, the island of Tasmania, and numerous smaller islands in the Indian and Pacific Oceans. It is the world's sixth-largest country by total area...
(http://www.freewebs.com/the_inspector/city_sightseeing_australia.html) or the United Kingdom
United Kingdom
The United Kingdom of Great Britain and Northern IrelandIn the United Kingdom and Dependencies, other languages have been officially recognised as legitimate autochthonous languages under the European Charter for Regional or Minority Languages...
, and function as tour buses and school bus
School bus
A school bus is a type of bus designed and manufactured for student transport: carrying children and teenagers to and from school and school events...
es.