The Chigi Chapel is one of six chapels in the Church of Santa Maria del Popolo
Santa Maria del Popolo
Santa Maria del Popolo is an Augustinian church located in Rome, Italy.It stands to the north side of the Piazza del Popolo, one of the most famous squares in the city. The Piazza is situated between the ancient Porta Flaminia and the park of the Pincio...
, Piazza del Popolo
Piazza del Popolo
Piazza del Popolo is a large urban square in Rome. The name in modern Italian literally means "People's Square", but historically it derives from the poplars after which the church of Santa Maria del Popolo, in the northeast corner of the piazza, takes its name.The piazza lies inside the northern...
, Rome. The Chigi chapel, the second on the left-hand side of the nave
Nave
In Romanesque and Gothic Christian abbey, cathedral basilica and church architecture, the nave is the central approach to the high altar, the main body of the church. "Nave" was probably suggested by the keel shape of its vaulting...
, was designed by Raphael
Raphael
Raffaello Sanzio da Urbino , better known simply as Raphael, was an Italian painter and architect of the High Renaissance. His work is admired for its clarity of form and ease of composition and for its visual achievement of the Neoplatonic ideal of human grandeur...
as a private chapel for his friend and patron Sienese banker Agostino Chigi
Agostino Chigi
Agostino Andrea Chigi was an Italian banker and patron of the Renaissance.Born in Siena, he was the son of the prominent banker Mariano Chigi, a member of an ancient and illustrious house. He moved to Rome around 1487, collaborating with his father...
, then completed by Gian Lorenzo Bernini
Gian Lorenzo Bernini
Gian Lorenzo Bernini was an Italian artist who worked principally in Rome. He was the leading sculptor of his age and also a prominent architect...
more than a century after Raphael's death in 1520. Bernini's patron was Fabio Chigi, who became pope Alexander VII
Pope Alexander VII
Pope Alexander VII , born Fabio Chigi, was Pope from 7 April 1655, until his death.- Early life :Born in Siena, a member of the illustrious banking family of Chigi and a great-nephew of Pope Paul V , he was privately tutored and eventually received doctorates of philosophy, law, and theology from...
in 1655.

Raphael gave the chapel a centralized octagonal plan, under a dome decorated with mosaics to his cartoon (1516), representing the Creation of the World
Creation of the World (Raphael)
Creation of the World is a mosaic in the dome of the Chigi Chapel in Santa Maria del Popolo, Rome, designed by Raphael.The Chigi Chapel in Santa Maria del Popolo was designed by Raphael for his friend and patron, banker Agostino Chigi as a private chapel and family burial place...
surrounded by the sun and the six know planets and a zodiac, each moved by an angel; it is a rare example of mosaic executed to a High Renaissance design. The clear and rational plan is of round-headed arches on the four walls, of which the entrance arch only is open, the others being blind; they alternated with canted corners in which niches are framed between pilasters. A subtle use of colored marbles emphasizes the individual elements of the classical Corinthian pilasters and entablature
Corinthian order
The Corinthian order is one of the three principal classical orders of ancient Greek and Roman architecture. The other two are the Doric and Ionic. When classical architecture was revived during the Renaissance, two more orders were added to the canon, the Tuscan order and the Composite order...
. 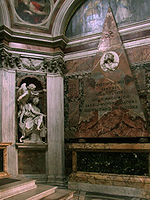 The theme of the chapel being the prefiguration of the New Dispensation offered by the New Testament, Raphael painted a fresco
Fresco
Fresco is any of several related mural painting types, executed on plaster on walls or ceilings. The word fresco comes from the Greek word affresca which derives from the Latin word for "fresh". Frescoes first developed in the ancient world and continued to be popular through the Renaissance...
of four classical sibyls over the archway of the door to the chapel. The chapel formerly contained Raphael's early panel painting of the Marriage of the Virgin
The Marriage of the Virgin (Raphael)
The Marriage of the Virgin, also known as Lo Sposalizio, is an oil painting by Italian High Renaissance artist Raphael. Completed in 1504 for a Franciscan church in Città di Castello, the painting depicts a marriage ceremony between Mary and Joseph...
, the famous Sposalizio now in the Brera
Brera
Brera is a district of Milan, ItalyBrera may also refer to:* the Palazzo Brera, a historical building in Brera; the palace also houses:** the Brera Art Academy** the Brera Art Gallery** the Brera Astronomical Observatory...
, Milan
Milan
Milan is the second-largest city in Italy and the capital city of the region of Lombardy and of the province of Milan. The city proper has a population of about 1.3 million, while its urban area, roughly coinciding with its administrative province and the bordering Province of Monza and Brianza ,...
.

The eighteenth-century tomb of Maria Flaminia Odescalchi Chigi, designed by Pier Paolo Posi, is also located in the Chigi Chapel.

Part of Dan Brown
Dan Brown
Dan Brown is an American author of thriller fiction, best known for the 2003 bestselling novel, The Da Vinci Code. Brown's novels, which are treasure hunts set in a 24-hour time period, feature the recurring themes of cryptography, keys, symbols, codes, and conspiracy theories...
's book Angels and Demons
Angels and Demons
Angels & Demons is a 2000 bestselling mystery-thriller novel written by American author Dan Brown and published by Pocket Books. The novel introduces the character Robert Langdon, who is also the protagonist of Brown's subsequent 2003 novel, The Da Vinci Code, and 2009 novel, The Lost Symbol...
takes place in the Chigi Chapel, where the sculpture of Habakkuk and the Angel is one of the four "markers" leading to an ancient lair in the Castel Sant'Angelo
Castel Sant'Angelo
The Mausoleum of Hadrian, usually known as the Castel Sant'Angelo, is a towering cylindrical building in Parco Adriano, Rome, Italy. It was initially commissioned by the Roman Emperor Hadrian as a mausoleum for himself and his family...
.