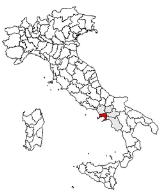 Encyclopedia
Chiaiano is a north-western suburb of Naples
Naples
Naples is a city in Southern Italy, situated on the country's west coast by the Gulf of Naples. Lying between two notable volcanic regions, Mount Vesuvius and the Phlegraean Fields, it is the capital of the region of Campania and of the province of Naples...
, with a population of about 23,000.

Chiaiano it's a hilly and wooded area that lies between Camaldoli
Hermitage of Camaldoli
The Camaldolese Hermitage of Monte Giove is a monastery near Naples, Campania, Italy.One of the monasteries still active in the region, it sits on the hill in back of Naples at the highest point in the city, between Vesuvius and the Phlegrean Fields. It was built in 1585 by the Camaldolese...
and the Campi Flegrei
Campi Flegrei
The Phlegraean Fields, also known as Campi Flegrei, , is a large wide caldera situated to the west of Naples, Italy. It was declared a regional park in 2003. Lying mostly underwater, the area comprises 24 craters and volcanic edifices. Hydrothermal activity can be observed at Lucrino, Agnano and...
.

Archaeologically, the area is of interest, displaying remnants of pre-and-non-Roman inhabitants such as the Oscans and Samnite
Samnium
Samnium is a Latin exonym for a region of south or south and central Italy in Roman times. The name survives in Italian today, but today's territory comprising it is only a small portion of what it once was. The populations of Samnium were called Samnites by the Romans...
s.

Since the earthquake of 1980, it is one of the outlying areas that has undergone extreme urbanization—that is, large tracts of public housing to provide for those left homeless by that event.