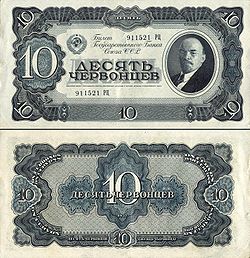 Before the reign of Peter I
Peter I of Russia
Peter the Great, Peter I or Pyotr Alexeyevich Romanov Dates indicated by the letters "O.S." are Old Style. All other dates in this article are New Style. ruled the Tsardom of Russia and later the Russian Empire from until his death, jointly ruling before 1696 with his half-brother, Ivan V...
, the name chervonets was applied to various foreign gold coins in circulation in Russia, mostly Dutch ducat
Ducat
The ducat is a gold coin that was used as a trade coin throughout Europe before World War I. Its weight is 3.4909 grams of .986 gold, which is 0.1107 troy ounce, actual gold weight...
s and sequin
Sequin
Sequins are disk-shaped beads used for decorative purposes. They are available in a wide variety of colors and geometrical shapes. Sequins are commonly used on clothing, jewelry, bags, shoes and lots of other accessories. Large sequins, fastened only at the top, have been used on billboards and...
s. In 1701, Russia introduced its own gold chervonets, which had the same mass (3.47 g) and alloy (.986) as the ducat. Chervontsy were minted until 1757 when they were displaced by the golden ruble (with a lower alloy) and by counterfeits of the Dutch ducat, which by then met the demand for trade in gold coins.

In 1922, during the civil war
Russian Civil War
The Russian Civil War was a multi-party war that occurred within the former Russian Empire after the Russian provisional government collapsed to the Soviets, under the domination of the Bolshevik party. Soviet forces first assumed power in Petrograd The Russian Civil War (1917–1923) was a...
, the Soviet government tried to enforce Communist economic ideals and eliminate debt through systematic devaluation of the rouble and its associated currencies (various forms of Imperial ruble, kerenka
Kerenka
Kerenka was an informal name of banknotes issued by the Russian Provisional Government in 1917, named so after the chairman Alexander Kerensky. They were also issued by the Gosbank of the Soviet Russia during 1917-1919 from the same plates until the introduction of sovznaks....
s and later sovznak
Sovznak
Sovznaks were promissory notes issued in Soviet Russia in 1919 and used during 1919-1924. The name is an abbreviation of the expression "Sovetskiye znaki" , which in its turn was an abbreviation of the official terms used during different periods...
s). Meanwhile, the authorities introduced a parallel currency, called chervonets, which was fully convertible and backed by the gold standard
Gold standard
The gold standard is a monetary system in which the standard economic unit of account is a fixed mass of gold. There are distinct kinds of gold standard...
. These coins contained 8.6 g of .900 alloy, and fetched a high rate on the foreign stock exchanges, allowing the financing of the Soviet Union's New Economic Policy
New Economic Policy
The New Economic Policy was an economic policy proposed by Vladimir Lenin, who called it state capitalism. Allowing some private ventures, the NEP allowed small animal businesses or smoke shops, for instance, to reopen for private profit while the state continued to control banks, foreign trade,...
. Before industrialisation
Industrialisation
Industrialization is the process of social and economic change that transforms a human group from an agrarian society into an industrial one...
the value of the chervonets was pegged at 10 rubles, and production of the gold coins ceased.

In 1937, Lenin's portrait first appeared on chervonets banknotes. The chervonets was suspended entirely after the monetary reform of 1947. However, a large number of golden chervontsy were restruck to the 1920s design before the 1980 Summer Olympics
1980 Summer Olympics
The 1980 Summer Olympics, officially known as the Games of the XXII Olympiad, was an international multi-sport event celebrated in Moscow in the Soviet Union. In addition, the yachting events were held in Tallinn, and some of the preliminary matches and the quarter-finals of the football tournament...
in Moscow, for the interest of collectors and businesses.

Original gold chervonets coins were minted in 1923 and 1925. Very few chervonets coins remain from 1923 and recently been selling for over $7000. There is wide misconception about the 1925 issue. All English sources copy each other and say that only one gold chervonets from 1925 survived although this is not entirely true. On an auction in April 2008 in Moscow, a single surviving production sample copper chervonets from 1925 with slightly modified design from 1923 appeared. It now showed the letters SSSR  instead of RSFSR
Russian Soviet Federative Socialist Republic
The Russian Soviet Federative Socialist Republic , commonly referred to as Soviet Russia, Bolshevik Russia, or simply Russia, was the largest, most populous and economically developed republic in the former Soviet Union....
, and introduced a new coat of arms (that one only featured the first seven Soviet republics, whereas by 1939 the USSR had 15). This copper sample sold for $200,000.

As of today, there exists five known gold chervonets from 1925. All are located in Moscow, Russia. Three are stored in the museum of Goznak, Russia's official mint. The other two are located in the Pushkin State Museum of Fine Arts.