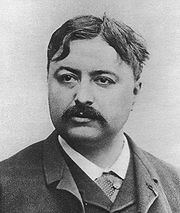 Charles Renard was a French military engineer. After the Franco-Prussian War
Franco-Prussian War
The Franco-Prussian War or Franco-German War, often referred to in France as the 1870 War was a conflict between the Second French Empire and the Kingdom of Prussia. Prussia was aided by the North German Confederation, of which it was a member, and the South German states of Baden, Württemberg and...
of 1870/71 he started work on the design of air ships at the French army aeronautical department. Together with Arthur C. Krebs
Arthur Krebs
Arthur Constantin Krebs was a French officer and pioneer in automotive engineering....
and his brother Paul, he constructed in 1884 the dirigible war balloon
Balloon (aircraft)
A balloon is a type of aircraft that remains aloft due to its buoyancy. A balloon travels by moving with the wind. It is distinct from an airship, which is a buoyant aircraft that can be propelled through the air in a controlled manner....
"La France
La France (airship)
The La France was a French Army airship launched by Charles Renard and Arthur Constantin Krebs in 1884. Collaborating with Charles Renard, Arthur Constantin Krebs piloted the first fully controlled free-flight with the La France. The long, airship, electric-powered with a 435 kg battery...
", which had its maiden flight
Maiden flight
The maiden flight of an aircraft is the first occasion on which an aircraft leaves the ground of its own accord. This is similar to a ship's maiden voyage....
on 1884-08-09 and was presented at the Paris Exposition Universelle (1889)
Exposition Universelle (1889)
The Exposition Universelle of 1889 was a World's Fair held in Paris, France from 6 May to 31 October 1889.It was held during the year of the 100th anniversary of the storming of the Bastille, an event traditionally considered as the symbol for the beginning of the French Revolution...
.