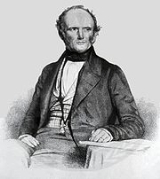 Overview
Sir Charles Lyell, 1st Baronet, Kt
Knight Bachelor
The rank of Knight Bachelor is a part of the British honours system. It is the most basic rank of a man who has been knighted by the monarch but not as a member of one of the organised Orders of Chivalry...
FRS (14 November 1797 – 22 February 1875) was a British
United Kingdom
The United Kingdom of Great Britain and Northern IrelandIn the United Kingdom and Dependencies, other languages have been officially recognised as legitimate autochthonous languages under the European Charter for Regional or Minority Languages...
lawyer
Lawyer
A lawyer, according to Black's Law Dictionary, is "a person learned in the law; as an attorney, counsel or solicitor; a person who is practicing law." Law is the system of rules of conduct established by the sovereign government of a society to correct wrongs, maintain the stability of political...
and the foremost geologist
Geologist
A geologist is a scientist who studies the solid and liquid matter that constitutes the Earth as well as the processes and history that has shaped it. Geologists usually engage in studying geology. Geologists, studying more of an applied science than a theoretical one, must approach Geology using...
of his day. He is best known as the author of Principles of Geology
Principles of Geology
Principles of Geology, being an attempt to explain the former changes of the Earth's surface, by reference to causes now in operation, is a book by the Scottish geologist Charles Lyell....
, which popularised James Hutton
James Hutton
James Hutton was a Scottish physician, geologist, naturalist, chemical manufacturer and experimental agriculturalist. He is considered the father of modern geology...
's concepts of uniformitarianism
Uniformitarianism (science)
In the philosophy of naturalism, the uniformitarianism assumption is that the same natural laws and processes that operate in the universe now, have always operated in the universe in the past and apply everywhere in the universe. It has included the gradualistic concept that "the present is the...
– the idea that the earth was shaped by slow-moving forces still in operation today. Lyell was a close and influential friend of Charles Darwin
Charles Darwin
Charles Robert Darwin FRS was an English naturalist. He established that all species of life have descended over time from common ancestry, and proposed the scientific theory that this branching pattern of evolution resulted from a process that he called natural selection.He published his theory...
.
Lyell was born in Scotland
Scotland
Scotland is a country that is part of the United Kingdom. Occupying the northern third of the island of Great Britain, it shares a border with England to the south and is bounded by the North Sea to the east, the Atlantic Ocean to the north and west, and the North Channel and Irish Sea to the...
about 15 miles north of Dundee
Dundee
Dundee is the fourth-largest city in Scotland and the 39th most populous settlement in the United Kingdom. It lies within the eastern central Lowlands on the north bank of the Firth of Tay, which feeds into the North Sea...
in Kinnordy, near Kirriemuir
Kirriemuir
Kirriemuir, sometimes called Kirrie, is a burgh in Angus, Scotland.-History:The history of Kirriemuir extends to the early historical period and it appears to have been a centre of some ecclesiastical importance...
in Forfarshire (now in Angus
Angus
Angus is one of the 32 local government council areas of Scotland, a registration county and a lieutenancy area. The council area borders Aberdeenshire, Perth and Kinross and Dundee City...
).