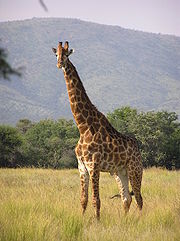 Central Kalahari Game Reserve is an extensive national park in the Kalahari desert
Kalahari Desert
The Kalahari Desert is a large semi-arid sandy savannah in Southern Africa extending , covering much of Botswana and parts of Namibia and South Africa, as semi-desert, with huge tracts of excellent grazing after good rains. The Kalahari supports more animals and plants than a true desert...
of Botswana
Botswana
Botswana, officially the Republic of Botswana , is a landlocked country located in Southern Africa. The citizens are referred to as "Batswana" . Formerly the British protectorate of Bechuanaland, Botswana adopted its new name after becoming independent within the Commonwealth on 30 September 1966...
. Established in 1961 it covers an area of 52,800 km² (about twice the size of Massachusetts, and 1/16 of Botswana's total land area) making it the second largest game reserve in the world.

The park contains wildlife such as giraffe
Giraffe
The giraffe is an African even-toed ungulate mammal, the tallest of all extant land-living animal species, and the largest ruminant...
, brown hyena
Brown Hyena
The brown hyena is a species of hyena which occurs in Namibia, Botswana, western and southern Zimbabwe, southern Mozambique and South Africa. It is currently the rarest hyena.-Description:...
, warthog
Warthog
The Warthog or Common Warthog is a wild member of the pig family that lives in grassland, savanna, and woodland in Sub-Saharan Africa. In the past it was commonly treated as a subspecies of P...
, cheetah
Cheetah
The cheetah is a large-sized feline inhabiting most of Africa and parts of the Middle East. The cheetah is the only extant member of the genus Acinonyx, most notable for modifications in the species' paws...
, wild dog
African Wild Dog
Lycaon pictus is a large canid found only in Africa, especially in savannas and lightly wooded areas. It is variously called the African wild dog, African hunting dog, Cape hunting dog, painted dog, painted wolf, painted hunting dog, spotted dog, or ornate wolf...
, leopard
Leopard
The leopard , Panthera pardus, is a member of the Felidae family and the smallest of the four "big cats" in the genus Panthera, the other three being the tiger, lion, and jaguar. The leopard was once distributed across eastern and southern Asia and Africa, from Siberia to South Africa, but its...
, lion
Lion
The lion is one of the four big cats in the genus Panthera, and a member of the family Felidae. With some males exceeding 250 kg in weight, it is the second-largest living cat after the tiger...
, blue wildebeest
Blue Wildebeest
The Blue Wildebeest , also called the Common Wildebeest, is a large antelope and one of two species of wildebeest. It grows to 115–145 cm shoulder height and attains a body mass of 168–274 kg. They range the open plains, bushveld and dry woodlands of Southern and East Africa, living for...
, eland
Common Eland
The common eland , also known as the southern eland or eland antelope, is a savannah and plains antelope found in East and Southern Africa. It is the largest antelope in the African continent...
, gemsbok
Gemsbok
The gemsbok or gemsbuck is a large antelope in the Oryx genus. It is native to the arid regions of southern Africa, but formerly some authorities included the East African Oryx as a subspecies...
, kudu
Kudu
The kudus are two species of antelope of the genus Tragelaphus:*Lesser Kudu, Tragelaphus imberbis*Greater Kudu, Tragelaphus strepsiceros- Etymology :...
and red hartebeest
Hartebeest
The hartebeest is a grassland antelope found in West Africa, East Africa and Southern Africa. It is one of the three species classified in the genus Alcelaphus....
.
The land is mostly flat, and gently undulating covered with bush and grasses covering the sand dunes, and areas of larger trees. Many of the river valleys are fossilized with salt pans. Four fossilized rivers meander
Meander
A meander in general is a bend in a sinuous watercourse. A meander is formed when the moving water in a stream erodes the outer banks and widens its valley. A stream of any volume may assume a meandering course, alternately eroding sediments from the outside of a bend and depositing them on the...
through the reserve including Deception Valley which began to form around 16,000 years ago .

The Bushmen
Bushmen
The indigenous people of Southern Africa, whose territory spans most areas of South Africa, Zimbabwe, Lesotho, Mozambique, Swaziland, Botswana, Namibia, and Angola, are variously referred to as Bushmen, San, Sho, Barwa, Kung, or Khwe...
, or San, have inhabited the lands for thousands of years since they roamed the area as nomadic hunters.

However, since the mid-1990s the Botswanan government has tried to relocate the Bushmen from the reserve claiming it is a drain on financial resources despite revenues increasing by tourism to the reserve. In 1997, three quarters of the entire San population were relocated from the reserve, and in October 2005 the government had resumed the forced relocation into resettlement camps outside of the park leaving only about 250 permanent occupiers . But in 2006 a Botswanan court proclaimed the eviction illegal by allowing people to return in Central Kalahari Game Reserve.

A huge bush fire took place in and around the park in the mid of September 2008 and around 80 percent of the reserve was burnt. The origin of the fire remains unknown.