Encyclopedia
The gemsbok or gemsbuck (Oryx gazella) is a large antelope
Antelope
Antelope is a term referring to many even-toed ungulate species indigenous to various regions in Africa and Eurasia. Antelopes comprise a miscellaneous group within the family Bovidae, encompassing those old-world species that are neither cattle, sheep, buffalo, bison, nor goats...
in the Oryx
Oryx
Oryx is one of four large antelope species of the genus Oryx. Three of the species are native to arid parts of Africa, with a fourth native to the Arabian Peninsula. Their pelage is pale with contrasing dark markings in the face and on the legs, and their long horns are almost straight...
genus. It is native to the arid regions (for example the Kalahari Desert
Kalahari Desert
The Kalahari Desert is a large semi-arid sandy savannah in Southern Africa extending , covering much of Botswana and parts of Namibia and South Africa, as semi-desert, with huge tracts of excellent grazing after good rains. The Kalahari supports more animals and plants than a true desert...
) of southern Africa
Southern Africa
Southern Africa is the southernmost region of the African continent, variably defined by geography or geopolitics. Within the region are numerous territories, including the Republic of South Africa ; nowadays, the simpler term South Africa is generally reserved for the country in English.-UN...
, but formerly some authorities included the East African Oryx
East African Oryx
The East African Oryx , also known as the Beisa occurs in two subspecies, Common Beisa Oryx found in steppe and semi-desert throughout the Horn of Africa and north of the Tana River, and Fringe-eared Oryx south of the Tana River in southern Kenya and parts of Tanzania...
as a subspecies
Subspecies
Subspecies in biological classification, is either a taxonomic rank subordinate to species, ora taxonomic unit in that rank . A subspecies cannot be recognized in isolation: a species will either be recognized as having no subspecies at all or two or more, never just one...
. Its current population in South Africa is 373,000.

The name "gemsbok" in English is derived from Afrikaans
Afrikaans
Afrikaans is a West Germanic language, spoken natively in South Africa and Namibia. It is a daughter language of Dutch, originating in its 17th century dialects, collectively referred to as Cape Dutch .Afrikaans is a daughter language of Dutch; see , , , , , .Afrikaans was historically called Cape...
gemsbock, itself derived from the Dutch
Dutch language
Dutch is a West Germanic language and the native language of the majority of the population of the Netherlands, Belgium, and Suriname, the three member states of the Dutch Language Union. Most speakers live in the European Union, where it is a first language for about 23 million and a second...
name of the male chamois
Chamois
The chamois, Rupicapra rupicapra, is a goat-antelope species native to mountains in Europe, including the Carpathian Mountains of Romania, the European Alps, the Tatra Mountains, the Balkans, parts of Turkey, and the Caucasus. The chamois has also been introduced to the South Island of New Zealand...
, gemsbok. Although there are some superficial similarities in appearance (especially in the facial pattern), the chamois and the oryx are not closely related. The usual pronunciation in English is ˈɡɛmzbɒk.

Gemsbok are light brownish-grey to tan in colour, with lighter patches to the bottom rear of the rump. Their tails are long and black in colour. A blackish stripe extends from the chin down the bottom edge of the neck through the join of the shoulder and leg along the lower flank of each side to the blackish section of the rear leg. They have muscular necks and shoulders and their legs have white 'socks' with a black patch on the front of both the front legs and both genders have long straight horns. Comparably, the East African Oryx
East African Oryx
The East African Oryx , also known as the Beisa occurs in two subspecies, Common Beisa Oryx found in steppe and semi-desert throughout the Horn of Africa and north of the Tana River, and Fringe-eared Oryx south of the Tana River in southern Kenya and parts of Tanzania...
lacks a dark patch at the base of the tail, has less blackish on the legs (none on the hindlegs), and less blackish on the lower flanks. 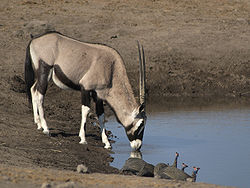 Gemsbok are widely hunted for their spectacular horns that average 85 centimetres (33.5 in) in length. The only outward difference between males and females is their horns, and many hunters mistake females for males each year. In males, these horns are perfectly straight, extending from the base of the skull to a slight outward and rearward angle. Females have longer thinner horns that have a slight outward and rearward curve in addition to their angle.

Gemsbok are one of the few antelope species where female trophies are sometimes more desirable than male ones. A gemsbok horn can be fashioned into a natural trumpet
Trumpet
The trumpet is the musical instrument with the highest register in the brass family. Trumpets are among the oldest musical instruments, dating back to at least 1500 BCE. They are played by blowing air through closed lips, producing a "buzzing" sound which starts a standing wave vibration in the air...
and, according to some authorities, can be used as a shofar
Shofar
A shofar is a horn, traditionally that of a ram, used for Jewish religious purposes. Shofar-blowing is incorporated in synagogue services on Rosh Hashanah and Yom Kippur.Shofar come in a variety of sizes.- Bible and rabbinic literature :...
.

Gemsbok live in herds of about 10-40 animals, which consist of a dominant male, a few non-dominant males, and females.

Gemsbok are mainly desert
Desert
A desert is a landscape or region that receives an extremely low amount of precipitation, less than enough to support growth of most plants. Most deserts have an average annual precipitation of less than...
-dwelling and do not depend on drinking to supply their physiological
Physiology
Physiology is the science of the function of living systems. This includes how organisms, organ systems, organs, cells, and bio-molecules carry out the chemical or physical functions that exist in a living system. The highest honor awarded in physiology is the Nobel Prize in Physiology or...
water needs.

In 1969 the New Mexico
New Mexico
New Mexico is a state located in the southwest and western regions of the United States. New Mexico is also usually considered one of the Mountain States. With a population density of 16 per square mile, New Mexico is the sixth-most sparsely inhabited U.S...
State Department of Game and Fish decided to introduce
Introduced species
An introduced species — or neozoon, alien, exotic, non-indigenous, or non-native species, or simply an introduction, is a species living outside its indigenous or native distributional range, and has arrived in an ecosystem or plant community by human activity, either deliberate or accidental...
Gemsbok to the Tularosa Basin
Tularosa Basin
The Tularosa Basin is a graben basin in the Basin and Range Province and within the Chihuahuan Desert, east of the Rio Grande in southern New Mexico, in the Southwestern United States.-Geography:...
in the United States
United States
The United States of America is a federal constitutional republic comprising fifty states and a federal district...
. The introduction was a compromise between those who wanted to preserve nature and those who wanted to use it for profit and promotion. 93 were released from 1969 to 1977. The current population is estimated to be 3,000. The reason the Gemsbok thrived is because their natural predators, including the Lion
Lion
The lion is one of the four big cats in the genus Panthera, and a member of the family Felidae. With some males exceeding 250 kg in weight, it is the second-largest living cat after the tiger...
, are not present.