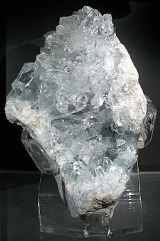 Overview
Celestine or celestite is a mineral
Mineral
A mineral is a naturally occurring solid chemical substance formed through biogeochemical processes, having characteristic chemical composition, highly ordered atomic structure, and specific physical properties. By comparison, a rock is an aggregate of minerals and/or mineraloids and does not...
consisting of strontium
Strontium
Strontium is a chemical element with the symbol Sr and the atomic number 38. An alkaline earth metal, strontium is a soft silver-white or yellowish metallic element that is highly reactive chemically. The metal turns yellow when exposed to air. It occurs naturally in the minerals celestine and...
sulfate
Sulfate
In inorganic chemistry, a sulfate is a salt of sulfuric acid.-Chemical properties:...
. The mineral is named for its occasional delicate blue color
Color
Color or colour is the visual perceptual property corresponding in humans to the categories called red, green, blue and others. Color derives from the spectrum of light interacting in the eye with the spectral sensitivities of the light receptors...
.
Celestine occurs as crystal
Crystal
A crystal or crystalline solid is a solid material whose constituent atoms, molecules, or ions are arranged in an orderly repeating pattern extending in all three spatial dimensions. The scientific study of crystals and crystal formation is known as crystallography...
s, and also in compact massive and fibrous forms. It is mostly found in sedimentary rocks, often associated with the minerals gypsum
Gypsum
Gypsum is a very soft sulfate mineral composed of calcium sulfate dihydrate, with the chemical formula CaSO4·2H2O. It is found in alabaster, a decorative stone used in Ancient Egypt. It is the second softest mineral on the Mohs Hardness Scale...
, anhydrite
Anhydrite
Anhydrite is a mineral – anhydrous calcium sulfate, CaSO4. It is in the orthorhombic crystal system, with three directions of perfect cleavage parallel to the three planes of symmetry. It is not isomorphous with the orthorhombic barium and strontium sulfates, as might be expected from the...
, and halite
Halite
Halite , commonly known as rock salt, is the mineral form of sodium chloride . Halite forms isometric crystals. The mineral is typically colorless or white, but may also be light blue, dark blue, purple, pink, red, orange, yellow or gray depending on the amount and type of impurities...
.

The mineral is found worldwide, usually in small quantities. Pale blue crystal specimens are found in Madagascar
Madagascar
The Republic of Madagascar is an island country located in the Indian Ocean off the southeastern coast of Africa...
.

The bodies of Acantharea
Acantharea
The Acantharea are a group of radiolarian protozoa, distinguished mainly by their skeletons.-Structure:These are composed of strontium sulfate crystals, which do not fossilize, and take the form of either ten diametric or twenty radial spines...
are made of celestine, unlike those of other radiolarian
Radiolarian
Radiolarians are amoeboid protozoa that produce intricate mineral skeletons, typically with a central capsule dividing the cell into inner and outer portions, called endoplasm and ectoplasm. They are found as zooplankton throughout the ocean, and their skeletal remains cover large portions of the...
s which are made of silica
Silicon dioxide
The chemical compound silicon dioxide, also known as silica , is an oxide of silicon with the chemical formula '. It has been known for its hardness since antiquity...
.

In carbonate marine sediments, burial dissolution is a recognised mechanism of celestine precipitation

The largest known celestine geode
Geode
Geodes are geological secondary sedimentary structures which occur in sedimentary and certain volcanic rocks. Geodes are essentially spherical masses of mineral matter that were deposited sygenetically within the rock formations they are found in. Geodes have a Chalcedony shell containing...
is located near the village of Put-in-Bay, Ohio
Put-in-Bay, Ohio
Put-in-Bay is a village located on South Bass Island in Put-in-Bay Township, Ottawa County, Ohio, United States. Many believe that the name originates from some early maps of South Bass Island that showed the harbor being named Pudding Bay, probably because it was shaped like a pudding sack. The...
on South Bass Island
South Bass Island
South Bass Island is a small island in western Lake Erie, and a part of Ottawa County, Ohio, United States. It is the southernmost of the three Bass Islands and located 12 miles from the south shore of Lake Erie. It is the third largest island in the Lake Erie Islands. The island is a popular...
in Lake Erie
Lake Erie
Lake Erie is the fourth largest lake of the five Great Lakes in North America, and the tenth largest globally. It is the southernmost, shallowest, and smallest by volume of the Great Lakes and therefore also has the shortest average water residence time. It is bounded on the north by the...
.

Are celestite sedimentary deposit due to sedimentation or precipitation?
More

Don't you think they are pretty!
More
x