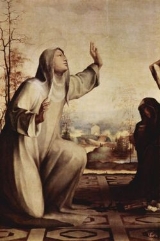 Overview
Saint Catherine of Siena, T.O.S.D, (25 March 1347 in Siena – 29 April 1380 in Rome) was a tertiary
Third order
The term Third Order designates persons who live according to the Third Rule of a Roman Catholic religious order, an Anglican religious order, or a Lutheran religious order. Their members, known as Tertiaries, are generally lay members of religious orders, i.e...
of the Dominican Order
Dominican Order
The Order of Preachers , after the 15th century more commonly known as the Dominican Order or Dominicans, is a Catholic religious order founded by Saint Dominic and approved by Pope Honorius III on 22 December 1216 in France...
, and a Scholastic
Scholasticism
Scholasticism is a method of critical thought which dominated teaching by the academics of medieval universities in Europe from about 1100–1500, and a program of employing that method in articulating and defending orthodoxy in an increasingly pluralistic context...
philosopher and theologian. She also worked to bring the papacy of Gregory XI back to Rome
Rome
Rome is the capital of Italy and the country's largest and most populated city and comune, with over 2.7 million residents in . The city is located in the central-western portion of the Italian Peninsula, on the Tiber River within the Lazio region of Italy.Rome's history spans two and a half...
from its displacement in France
Avignon Papacy
The Avignon Papacy was the period from 1309 to 1376 during which seven Popes resided in Avignon, in modern-day France. This arose from the conflict between the Papacy and the French crown....
, and to establish peace among the Italian city-states. She was proclaimed a Doctor of the Church
Doctor of the Church
Doctor of the Church is a title given by a variety of Christian churches to individuals whom they recognize as having been of particular importance, particularly regarding their contribution to theology or doctrine.-Catholic Church:In the Catholic Church, this name is given to a saint from whose...
in 1970. She is one of the two patron saint
Patron saint
A patron saint is a saint who is regarded as the intercessor and advocate in heaven of a nation, place, craft, activity, class, clan, family, or person...
s of Italy
Italy
Italy , officially the Italian Republic languages]] under the European Charter for Regional or Minority Languages. In each of these, Italy's official name is as follows:;;;;;;;;), is a unitary parliamentary republic in South-Central Europe. To the north it borders France, Switzerland, Austria and...
, together with St. Francis of Assisi
Francis of Assisi
Saint Francis of Assisi was an Italian Catholic friar and preacher. He founded the men's Franciscan Order, the women’s Order of St. Clare, and the lay Third Order of Saint Francis. St...
.
Caterina Benincasa was born in Siena
Siena
Siena is a city in Tuscany, Italy. It is the capital of the province of Siena.The historic centre of Siena has been declared by UNESCO a World Heritage Site. It is one of the nation's most visited tourist attractions, with over 163,000 international arrivals in 2008...
, Italy, to Giacomo di Benincasa, a cloth dyer who ran his enterprise with the help of his sons, and Lapa Piagenti, possibly the daughter of a local poet.

Why should one chose her for a saint name?

Where did Saint Catherine of Siena spend most of her life?
More

All the way to Heaven is heaven.