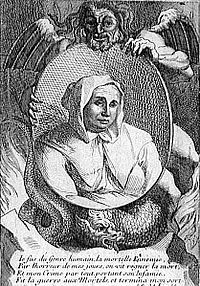 Catherine Monvoisin, née
NEE
NEE is a political protest group whose goal was to provide an alternative for voters who are unhappy with all political parties at hand in Belgium, where voting is compulsory.The NEE party was founded in 2005 in Antwerp...
Deshayes, known as "La Voisin" (c. 1640 – February 22, 1680), was an French
France
The French Republic , The French Republic , The French Republic , (commonly known as France , is a unitary semi-presidential republic in Western Europe with several overseas territories and islands located on other continents and in the Indian, Pacific, and Atlantic oceans. Metropolitan France...
alleged sorceress
Witchcraft
Witchcraft, in historical, anthropological, religious, and mythological contexts, is the alleged use of supernatural or magical powers. A witch is a practitioner of witchcraft...
, one of the chief personages in the affaire des poisons
Poison affair
The Affair of the Poisons was a major murder scandal in France which took place in 1677–1682, during the reign of King Louis XIV. During it, a number of prominent members of the aristocracy were implicated and sentenced on charges of poisoning and witchcraft...
, during the reign of Louis XIV
Louis XIV of France
Louis XIV , known as Louis the Great or the Sun King , was a Bourbon monarch who ruled as King of France and Navarre. His reign, from 1643 to his death in 1715, began at the age of four and lasted seventy-two years, three months, and eighteen days...
.

Catherine Deshayes wedded an unsuccessful jeweller named Monvoisin. La Voisin started her career by practising chiromancy
Chiromancy
Palmistry or chiromancy , is the art of characterization and foretelling the future through the study of the palm, also known as palm reading, or chirology. The practice is found all over the world, with numerous cultural variations...
and face-reading to retrieve her and her husband's fortunes. She gradually added the practice of "witchcraft
Witchcraft
Witchcraft, in historical, anthropological, religious, and mythological contexts, is the alleged use of supernatural or magical powers. A witch is a practitioner of witchcraft...
", in which she was assisted by a renegade priest, Etienne Guibourg
Étienne Guibourg
The Abbé Étienne Guibourg was a French Roman Catholic abbé who was involved in the Affair of the Poisons.He was the sacristan of the Saint-Marcel church at Saint-Denis, and formerly the chaplain to the Comte de Montgomery. He claimed to be the illegitimate son of Henri de Montmorency...
, whose part was the celebration of the "black mass
Black Mass
A Black Mass is a ceremony supposedly celebrated during the Witches' Sabbath, which was a sacrilegious parody of the Catholic Mass. Its main objective was the profanation of the host, although there is no agreement among authors on how hosts were obtained or profaned; the most common idea is that...
", a parody of the Christian Mass
Mass (liturgy)
"Mass" is one of the names by which the sacrament of the Eucharist is called in the Roman Catholic Church: others are "Eucharist", the "Lord's Supper", the "Breaking of Bread", the "Eucharistic assembly ", the "memorial of the Lord's Passion and Resurrection", the "Holy Sacrifice", the "Holy and...
.
She practised medicine, especially midwifery, and performed abortions. She also provided love powders and poisons. Her chief assistant was her lover, the magician Lesage
Lesage
Lesage or LeSage may refer to:*Albert Lesage Founder of Lesage et Cie. house of embroidery*Merle LeSage , mayor of Geneseo, IL*Jean Lesage , Canadian lawyer and politician...
, whose real name was Adam Cœuret.

The leading ladies of Parisian society flocked to La Voisin, who accumulated enormous wealth from them. Among her clients were Olympe Mancini, Comtesse de Soissons
Olimpia Mancini
Olympia Mancini, Countess of Soissons was the second eldest of the five celebrated Mancini sisters, who along with two of their female Martinozzi cousins, were known at the court of King Louis XIV of France as the Mazarinettes because their uncle was Louis XIV's chief minister, Cardinal Mazarin...
, who sought the death of the king's mistress, Louise de La Vallière
Louise de La Vallière
Louise de La Vallière was a mistress of Louis XIV of France from 1661 to 1667. She later became the Duchess of La Vallière and Duchess of Vaujours in her own right...
; and the Comtesse de Gramont ("la belle Hamilton")
Elizabeth, Countess de Grammont
Elizabeth, Countess de Grammont was a British courtier and a French lady in waiting. She was one of the Windsor Beauties, painted by Sir Peter Lely. She was Dame du Palais to Maria Theresa of Spain....
, among others. Françoise-Athénaïs, marquise de Montespan
Françoise-Athénaïs, marquise de Montespan
Françoise Athénaïs de Rochechouart de Mortemart, marquise of Montespan , better known as Madame de Montespan, was the most celebrated maîtresse en titre of King Louis XIV of France, by whom she had seven children....
was later accused of having hired Voisin to poison Louis XIV and her rival, Louis lover Mademoiselle de Fontanges. However, La Voisin never pointed out Montespan as her client, and although many people claimed Montespan was a client of La Voisin, this was never confirmed or proven and many of the testimonies were inconsistent.

The bones of toads, the teeth of moles, Spanish flies
Spanish fly
The Spanish fly is an emerald-green beetle in the family Meloidae, Lytta vesicatoria. Other species of blister beetle used by apothecaries are often called by the same name...
, iron filings, human blood and mummy
Mummia
Mummia, Mumia, or "Mummy" is either a substance used in the embalming of mummies, or a powder made from ground mummies, used as a "medical preparation"...
, or the dust of human remains, were among the alleged ingredients of the love powders concocted by La Voisin. Her knowledge of poisons was not apparently so thorough as that of less well-known sorcerers, or it would be difficult to account for La Vallière's immunity. The art of poisoning had become a regular science at the time, having been perfected, in part, by Giulia Tofana
Giulia Tofana
Giulia Tofana or Toffana was an Italian professional poisoner. She was famous for selling poison to women who wanted to murder their husbands. She was the inventor of the famous poison Aqua Tofana, which is named after her....
, a professional female poisoner in Italy, only a few decades before La Voisin.

La Voisin was convicted of witchcraft
Witchcraft
Witchcraft, in historical, anthropological, religious, and mythological contexts, is the alleged use of supernatural or magical powers. A witch is a practitioner of witchcraft...
and was burned
Execution by burning
Death by burning is death brought about by combustion. As a form of capital punishment, burning has a long history as a method in crimes such as treason, heresy, and witchcraft....
in public on the Place de Grève in Paris.

The part of La Voisin in the 1997 film Marquise
Marquise (film)
Marquise is a 1997 French dramatic film directed by Véra Belmont, and starring Sophie Marceau, Bernard Giraudeau, and Lambert Wilson. The film is set in seventeenth century France and includes several historical figures, such as Moliere, Racine, and King Louis XIV.- Plot :While four actresses from...
was played by Anémone (real name Anne Bourguignon).