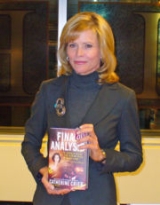 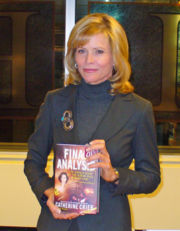 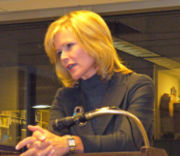 Crier was born in Dallas, Texas
Dallas, Texas
Dallas is the third-largest city in Texas and the ninth-largest in the United States. The Dallas-Fort Worth Metroplex is the largest metropolitan area in the South and fourth-largest metropolitan area in the United States...
in 1954 to William and Ann Crier and has two sisters. Crier graduated from Richardson High School
Richardson High School
Richardson High School is a High school in Richardson, Texas, United States with a 2006 enrollment of approximately 2500 and a student/teacher ratio of 12.8.-Background:...
and University of Texas at Austin
University of Texas at Austin
The University of Texas at Austin is a state research university located in Austin, Texas, USA, and is the flagship institution of the The University of Texas System. Founded in 1883, its campus is located approximately from the Texas State Capitol in Austin...
, from which she earned Bachelor of Arts in political science and international affairs. In college, she was a member of the Delta Delta Delta
Delta Delta Delta
Delta Delta Delta , also known as Tri Delta, is an international sorority founded on November 27, 1888, the eve of Thanksgiving Day. With over 200,000 initiates, Tri Delta is one of the world's largest NPC sororities.-History:...
sorority. She received her Juris Doctor
Juris Doctor
Juris Doctor is a professional doctorate and first professional graduate degree in law.The degree was first awarded by Harvard University in the United States in the late 19th century and was created as a modern version of the old European doctor of law degree Juris Doctor (see etymology and...
from Southern Methodist University Dedman School of Law.

Crier began her TV career at CNN
CNN
Cable News Network is a U.S. cable news channel founded in 1980 by Ted Turner. Upon its launch, CNN was the first channel to provide 24-hour television news coverage, and the first all-news television channel in the United States...
in 1989, where she co-anchored the programs Inside Politics ‘92 and The World Today. In 1992, ABC News
American Broadcasting Company
The American Broadcasting Company is an American commercial broadcasting television network. Created in 1943 from the former NBC Blue radio network, ABC is owned by The Walt Disney Company and is part of Disney-ABC Television Group. Its first broadcast on television was in 1948...
hired her as a correspondent for ABC World News Tonight and the newsmagazine 20/20. After spending three and a half years with ABC News, Fox News Channel
Fox News Channel
Fox News Channel , often called Fox News, is a cable and satellite television news channel owned by the Fox Entertainment Group, a subsidiary of News Corporation...
hired her to anchor The Crier Report, a live, nightly talk show. In 2000, Crier joined Court TV
Court TV
truTV is an American cable television network owned by Turner Broadcasting, a subsidiary of Time Warner. The network launched as Court TV in 1991, changing to truTV in 2008...
as host of Crier Today, a daily show concerning legal news, and in 2001, launched a new show, Catherine Crier Live. Catherine Crier Live ran for six years until it was cancelled on April 27, 2007. In 2004, she covered horse racing for ESPN/ABC Sports
Thoroughbred Racing on ESPN
ESPN and ESPN2's coverage of Thoroughbred racing currently consists of NTRA Racing to the Kentucky Derby, The Breeders' Cup on ESPN. In addition, ESPN on ABC broadcasts a portion of the Breeders Cup. Among its regulars on its horse racing telecasts are hosts Joe Tessitore and Kenny Mayne, along...
, which lasted one year.

Aside from her TV work, she has authored several non-fiction books. Crier appeared in the 2006 Robin Williams
Robin Williams
Robin McLaurin Williams is an American actor and comedian. Rising to fame with his role as the alien Mork in the TV series Mork and Mindy, and later stand-up comedy work, Williams has performed in many feature films since 1980. He won the Academy Award for Best Supporting Actor for his performance...
film Man of the Year
Man of the Year (2006 film)
Man of the Year is a 2006 Comedy film directed and written by Barry Levinson and starring Robin Williams in the lead role. In addition to Williams, the film features Christopher Walken, Laura Linney, Lewis Black and Jeff Goldblum....
in which her role was that of Political Commentator #2 but was credited with the name of Cathleen Crier.