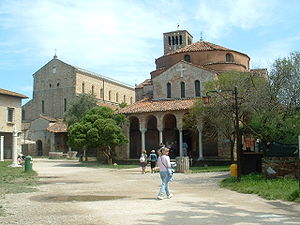 The Cathedral of Santa Maria Assunta (Cattedrale di Santa Maria Assunta) is a basilica church
Minor basilica
Minor basilica is a title given to some Roman Catholic churches. By canon law no Catholic church can be honoured with the title of basilica unless by apostolic grant or from immemorial custom....
on the island of Torcello
Torcello
Torcello is a quiet and sparsely populated island at the northern end of the Venetian Lagoon. It is considered the oldest continuously populated region of Venice, and once held the largest population of the Republic of Venice.-History:...
, Venice
Venice
Venice is a city in northern Italy which is renowned for the beauty of its setting, its architecture and its artworks. It is the capital of the Veneto region...
, northern Italy
Italy
Italy , officially the Italian Republic languages]] under the European Charter for Regional or Minority Languages. In each of these, Italy's official name is as follows:;;;;;;;;), is a unitary parliamentary republic in South-Central Europe. To the north it borders France, Switzerland, Austria and...
. It is a notable example of Venetian-Byzantine architecture, one of the most ancient religious edifices in the Veneto
Veneto
Veneto is one of the 20 regions of Italy. Its population is about 5 million, ranking 5th in Italy.Veneto had been for more than a millennium an independent state, the Republic of Venice, until it was eventually annexed by Italy in 1866 after brief Austrian and French rule...
.

According to an ancient inscription, it was founded by the exarch Isaac of Ravenna
Ravenna
Ravenna is the capital city of the Province of Ravenna in the Emilia-Romagna region of Italy and the second largest comune in Italy by land area, although, at , it is little more than half the size of the largest comune, Rome...
in 639. 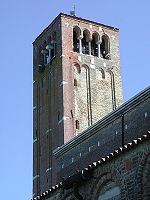 The first of two major renovations occurred in 864 under the direction of Bishop Adeodatus II. In this renovation, the two aisle apses that appear today were built. Also, the synthronon that fills the central apse was created and the crypt was placed under it. After this renovation, the cathedral would have resembled the current cathedral more than the original church would have but it is not until after the second and final major renovation that the cathedral appears very similar to its current design.

The final renovation was consecrated under Bishop Orso Orseolo, whose father Pietro Orseolo II was the Doge of Venice
Doge of Venice
The Doge of Venice , often mistranslated Duke was the chief magistrate and leader of the Most Serene Republic of Venice for over a thousand years. Doges of Venice were elected for life by the city-state's aristocracy. Commonly the person selected as Doge was the shrewdest elder in the city...
at the time, in 1008. With this renovation, Orseolo raised the nave, added windows to the western wall, and created the arcade that runs along the nave on both sides separating it from the aisles and helping to support the clerestory.

The façade is preceded by a narthex
Narthex
The narthex of a church is the entrance or lobby area, located at the end of the nave, at the far end from the church's main altar. Traditionally the narthex was a part of the church building, but was not considered part of the church proper...
to which was once annexed the 7th century baptistry, only traces of which remain. On its side is the martyrion, dedicated to Santa Fosca. The bell tower dates from the 11th century. Also annexed was in origin the Bishop's Palace. The façade has 12 semi-columns connected by arches at the tops. The narthex (11th century) was enlarged in the 13th century. In the middle is the marble portal (1000).

The most striking exterior features are the decoration of the façade and the frontal portico, enlarged in the 14th century. The interior, with a nave and two aisles, has a marble pavement, the throne of the bishops of Altino
Altinum
260px|thumb|Remains of the Roman [[decumanus]].Altinum is the name of an ancient coastal town of the Veneti 15 km SE of the modern Treviso, northern Italy, on the edge of the lagoons...
and the sepulchre of St. Heliodorus
Heliodorus of Altino
Saint Heliodorus was the first bishop of Altinum in the 4th century. He was born at Dalmatia. Like Chromatius, he was a disciple of Valerianus, the bishop of Aquileia....
, first bishop of Altino. The counter-façade has a mosaic of the Universal Judgement. Noteworthy is also a mosaic depicting a Madonna with Child (of the Hodegetria
Hodegetria
A Hodegetria — or Virgin Hodegetria — is an iconographic depiction of the Theotokos holding the Child Jesus at her side while pointing to Him as the source of salvation for mankind...
type) in the middle apse (15th century).

The most important artistical element of the cathedral is a series of mosaics of Byzantine-Ravennate school, including a Last Judgement in the counter-façade. The skull of Saint Cecilia is also kept as a relic here.
The source of this article is wikipedia, the free encyclopedia.  The text of this article is licensed under the GFDL.