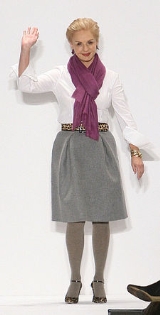 Encyclopedia
Carolina Herrera is a country and member state of the European Union located in southwestern Europe on the Iberian Peninsula...
's Gold Medal for Merit in the Fine Arts, which was presented to her in 2002 by King Juan Carlos I. She also was awarded the Gold Medal of the Queen Sofía Spanish Institute
Queen Sofia Spanish Institute
The Queen Sofía Spanish Institute is an organization in New York City founded to promote the Spanish language and the culture of Spain. It is located on 684 Park Avenue in the former Oliver D. Filley House.- History :...
in 1997.

Herrera received the distinguished "Mercedes-Benz Presents" title for the season spring/summer 2011 collection. The award recognizes designers for their dedication to the use of quality materials, unique style and innovative design for the past seven years. The milestone comes not only as the designer's runway show debuts at the first ever Fashion Week held at Lincoln Center in New York City, but the opening of her highly anticipated CH Carolina Herrera store at 802 Madison Avenue with special guest illustrator Robert Risko
Robert Risko
Robert Risko is an American caricature artist known for his retro airbrush style. He began his career by following in the footsteps of his mentor Andy Warhol and moved to New York City from Pittsburgh. He started drawing iconic celebrity portraits in his inimitable graphic style for Warhol's...
, and the 10th anniversary of her Madison Avenue flagship store at 954 Madison Avenue.

There are six Carolina Herrera flagship boutiques in the world. They are in New York, Dallas, Los Angeles, Bal Harbor, Las Vegas and Caracas (as of October 12, 2011).

In 2008, Carolina Herrera launched a lifestyle brand called CH Carolina Herrera. In that year, the company opened four stores at The Galleria
Houston Galleria
The Galleria, stylized theGalleria, is an upscale mixed-use urban development centrally located in the Uptown District of Houston, Texas, United States. The development consists of a retail complex, as well as the Galleria Office Towers complex, two Westin hotels, and a private health club...
in Houston, Texas
Houston, Texas
Houston is the fourth-largest city in the United States, and the largest city in the state of Texas. According to the 2010 U.S. Census, the city had a population of 2.1 million people within an area of . Houston is the seat of Harris County and the economic center of , which is the ...
, Americana Manhasset
Americana Manhasset
Americana Manhasset is a high-end, open-air shopping center located in Manhasset, New York. It is the largest and most well known shopping center in the area, sometimes commonly referred to as the "Miracle Mile"....
, in Manhasset, New York
Manhasset, New York
Manhasset is a hamlet and neighborhood in Nassau County, New York, on the North Shore of Long Island. As of the United States 2010 Census, the population was 8,080....
, The Forum Shops at Caesars
The Forum Shops at Caesars
The Forum Shops at Caesars is a luxury mall connected to Caesars Palace on the Las Vegas Strip in Las Vegas, Nevada. Built as an extension wing of the main hotel, the mallnow fronts on The Strip...
in Las Vegas, Nevada
Las Vegas, Nevada
Las Vegas is the most populous city in the U.S. state of Nevada and is also the county seat of Clark County, Nevada. Las Vegas is an internationally renowned major resort city for gambling, shopping, and fine dining. The city bills itself as The Entertainment Capital of the World, and is famous...
, and The Village of Merrick Park in Coral Gables, Florida
Coral Gables, Florida
Coral Gables is a city in Miami-Dade County, Florida, southwest of Downtown Miami, in the United States. The city is home to the University of Miami....
. Currently, there are also boutiques in Boca Raton
Boca Raton, Florida
Boca Raton is a city in Palm Beach County, Florida, USA, incorporated in May 1925. In the 2000 census, the city had a total population of 74,764; the 2006 population recorded by the U.S. Census Bureau was 86,396. However, the majority of the people under the postal address of Boca Raton, about...
, Costa Mesa
Costa Mesa, California
Costa Mesa is a city in Orange County, California. The population was 109,960 at the 2010 census. Since its incorporation in 1953, the city has grown from a semi-rural farming community of 16,840 to a primarily suburban and "edge" city with an economy based on retail, commerce, and light...
, Dallas
Dallas, Texas
Dallas is the third-largest city in Texas and the ninth-largest in the United States. The Dallas-Fort Worth Metroplex is the largest metropolitan area in the South and fourth-largest metropolitan area in the United States...
, San Diego
San Diego, California
San Diego is the eighth-largest city in the United States and second-largest city in California. The city is located on the coast of the Pacific Ocean in Southern California, immediately adjacent to the Mexican border. The birthplace of California, San Diego is known for its mild year-round...
, and Scottsdale
Scottsdale, Arizona
Scottsdale is a city in the eastern part of Maricopa County, Arizona, United States, adjacent to Phoenix. According to the U.S. Census Bureau, as of 2010 the population of the city was 217,385...
.

The company is expanding this lifestyle brand and anticipates to open a store on Madison Avenue in New York City in 2010 and in San Juan,Puerto Rico in October 2011.