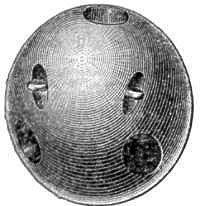 A carcass was an early form of incendiary
Incendiary ammunition
-World War I:One of the first uses of incendiary ammunition occurred in World War I. At the time, phosphorus—the primary ingredient in the incendiary charge—ignited upon firing, leaving a trail of blue smoke. They were also known as 'smoke tracer' for this reason. The effective range of...
bomb
Bomb
A bomb is any of a range of explosive weapons that only rely on the exothermic reaction of an explosive material to provide an extremely sudden and violent release of energy...
or shell
Shell (projectile)
A shell is a payload-carrying projectile, which, as opposed to shot, contains an explosive or other filling, though modern usage sometimes includes large solid projectiles properly termed shot . Solid shot may contain a pyrotechnic compound if a tracer or spotting charge is used...
, intended to set targets on fire. It comprised an external casing, usually of cast iron
Cast iron
Cast iron is derived from pig iron, and while it usually refers to gray iron, it also identifies a large group of ferrous alloys which solidify with a eutectic. The color of a fractured surface can be used to identify an alloy. White cast iron is named after its white surface when fractured, due...
, filled with a highly flammable mixture, and having three to five holes through which the burning filling could blaze outward. Carcasses were shot from howitzer
Howitzer
A howitzer is a type of artillery piece characterized by a relatively short barrel and the use of comparatively small propellant charges to propel projectiles at relatively high trajectories, with a steep angle of descent...
s, mortars
Mortar (weapon)
A mortar is an indirect fire weapon that fires explosive projectiles known as bombs at low velocities, short ranges, and high-arcing ballistic trajectories. It is typically muzzle-loading and has a barrel length less than 15 times its caliber....
, and other cannon
Cannon
A cannon is any piece of artillery that uses gunpowder or other usually explosive-based propellents to launch a projectile. Cannon vary in caliber, range, mobility, rate of fire, angle of fire, and firepower; different forms of cannon combine and balance these attributes in varying degrees,...
s to set fire to buildings and defenses
Defense (military)
Defense has several uses in the sphere of military application.Personal defense implies measures taken by individual soldiers in protecting themselves whether by use of protective materials such as armor, or field construction of trenches or a bunker, or by using weapons that prevent the enemy...
; on impact, the shell shattered, spreading its incendiary filling around the target. Congreve rocket
Congreve rocket
The Congreve Rocket was a British military weapon designed and developed by Sir William Congreve in 1804.The rocket was developed by the British Royal Arsenal following the experiences of the Second, Third and Fourth Mysore Wars. The wars fought between the British East India Company and the...
s were also sometimes fitted with carcass heads.

They were named carcass because the circles which pass from one ring, or plate, to the other, were thought to resemble the ribs of a human carcass
Body
With regard to living things, a body is the physical body of an individual. "Body" often is used in connection with appearance, health issues and death...
.

Carcasses were used for the first time by the French under Louis XIV
Louis XIV of France
Louis XIV , known as Louis the Great or the Sun King , was a Bourbon monarch who ruled as King of France and Navarre. His reign, from 1643 to his death in 1715, began at the age of four and lasted seventy-two years, three months, and eighteen days...
in 1672. They were also fired from bomb vessel
Bomb vessel
A bomb vessel, bomb ship, bomb ketch, or simply bomb was a type of wooden sailing naval ship. Its primary armament was not cannon —although bomb vessels carried a few cannon for self-defence—but rather mortars mounted forward near the bow and elevated to a high angle, and projecting their fire in a...
s.

The carcass shell as used by the Royal Navy
Royal Navy
The Royal Navy is the naval warfare service branch of the British Armed Forces. Founded in the 16th century, it is the oldest service branch and is known as the Senior Service...
in the 18th century, most famously in the attack on Fort McHenry
Fort McHenry
Fort McHenry, in Baltimore, Maryland, is a star-shaped fort best known for its role in the War of 1812, when it successfully defended Baltimore Harbor from an attack by the British navy in Chesapeake Bay...
, was a hollow cast iron sphere weighing 190 pounds (86.2 kg). Instead of the single fuse hole found on a conventional mortar
Mortar (weapon)
A mortar is an indirect fire weapon that fires explosive projectiles known as bombs at low velocities, short ranges, and high-arcing ballistic trajectories. It is typically muzzle-loading and has a barrel length less than 15 times its caliber....
shell of the period, the carcass had 3 openings, each 3 inches (76.2 mm) in diameter. Its filling burned for 11 minutes upon firing. It was especially useful during night bombardments, as the burning projectile assisted in the aiming of the cannon.

For the composition of the flammable material used in a carcass, 18th century philosopher Christian Wolff
Christian Wolff (philosopher)
Christian Wolff was a German philosopher.He was the most eminent German philosopher between Leibniz and Kant...
prescribed 10 parts of pounded gunpowder
Gunpowder
Gunpowder, also known since in the late 19th century as black powder, was the first chemical explosive and the only one known until the mid 1800s. It is a mixture of sulfur, charcoal, and potassium nitrate - with the sulfur and charcoal acting as fuels, while the saltpeter works as an oxidizer...
, 2 of nitre, 1 of sulfur
Sulfur
Sulfur or sulphur is the chemical element with atomic number 16. In the periodic table it is represented by the symbol S. It is an abundant, multivalent non-metal. Under normal conditions, sulfur atoms form cyclic octatomic molecules with chemical formula S8. Elemental sulfur is a bright yellow...
, and 1 of colophony; or 6 of gunpowder, 4 of nitre, 4 of sulfur, 1 of beaten glass, 0.5 of antimony
Antimony
Antimony is a toxic chemical element with the symbol Sb and an atomic number of 51. A lustrous grey metalloid, it is found in nature mainly as the sulfide mineral stibnite...
0.5 of camphor
Camphor
Camphor is a waxy, white or transparent solid with a strong, aromatic odor. It is a terpenoid with the chemical formula C10H16O. It is found in wood of the camphor laurel , a large evergreen tree found in Asia and also of Dryobalanops aromatica, a giant of the Bornean forests...
, 1 of sal armoniac, and 0.25 of common salt
Salt
In chemistry, salts are ionic compounds that result from the neutralization reaction of an acid and a base. They are composed of cations and anions so that the product is electrically neutral...
. For the shell, he started with two iron rings (others used plates), fitting one at one extreme, near the aperture at which the carcass was to be fired, and the other at the other. These he braced with cords drawn lengthwise; and across these, at right angles, laced other cords, making a knot at each intersection. Between the folds of the cords, he made holes, inserted copper tubes, and filled them half full of powder and lead bullets, packing it in with a tow. The internal shell's aperture was then plugged up, and it was immersed in a mixture of 4 parts of melted pitch
Pitch (resin)
Pitch is the name for any of a number of viscoelastic, solid polymers. Pitch can be made from petroleum products or plants. Petroleum-derived pitch is also called bitumen. Pitch produced from plants is also known as resin. Products made from plant resin are also known as rosin.Pitch was...
, 20 of rosin
Rosin
.Rosin, also called colophony or Greek pitch , is a solid form of resin obtained from pines and some other plants, mostly conifers, produced by heating fresh liquid resin to vaporize the volatile liquid terpene components. It is semi-transparent and varies in color from yellow to black...
, 1 of oil of turpentine, and as much ground gunpowder as was needed to reduce it to the consistency of a paste. After immersion, the shell was to be covered with tow
Tow
In the composites industry, a tow is an untwisted bundle of continuous filaments, and it refers to man-made fibres, particularly carbon fibres ....
, and immersed again, until it was the proper size for the mortar.

Carcass shells as used by the Royal Navy from the 18th to the 19th centuries were filled with a mixture of saltpeter
Potassium nitrate
Potassium nitrate is a chemical compound with the formula KNO3. It is an ionic salt of potassium ions K+ and nitrate ions NO3−.It occurs as a mineral niter and is a natural solid source of nitrogen. Its common names include saltpetre , from medieval Latin sal petræ: "stone salt" or possibly "Salt...
, sulfur, rosin, sulfide of antimony
Stibnite
Stibnite, sometimes called antimonite, is a sulfide mineral with the formula Sb2S3. This soft grey material crystallizes in an orthorhombic space group. It is the most important source for the metalloid antimony...
, tallow
Tallow
Tallow is a rendered form of beef or mutton fat, processed from suet. It is solid at room temperature. Unlike suet, tallow can be stored for extended periods without the need for refrigeration to prevent decomposition, provided it is kept in an airtight container to prevent oxidation.In industry,...
and turpentine
Turpentine
Turpentine is a fluid obtained by the distillation of resin obtained from trees, mainly pine trees. It is composed of terpenes, mainly the monoterpenes alpha-pinene and beta-pinene...
.
The source of this article is wikipedia, the free encyclopedia.  The text of this article is licensed under the GFDL.