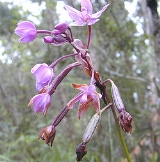 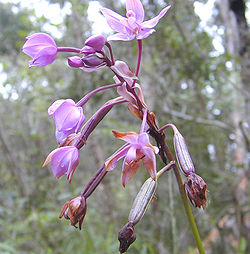 In botany
Botany
Botany, plant science, or plant biology is a branch of biology that involves the scientific study of plant life. Traditionally, botany also included the study of fungi, algae and viruses...
a capsule is a type of simple, dry fruit
Fruit
In broad terms, a fruit is a structure of a plant that contains its seeds.The term has different meanings dependent on context. In non-technical usage, such as food preparation, fruit normally means the fleshy seed-associated structures of certain plants that are sweet and edible in the raw state,...
produced by many species of flowering plant
Flowering plant
The flowering plants , also known as Angiospermae or Magnoliophyta, are the most diverse group of land plants. Angiosperms are seed-producing plants like the gymnosperms and can be distinguished from the gymnosperms by a series of synapomorphies...
s. A capsule is a structure composed of two or more carpels that in most cases is dehiscent
Dehiscence (botany)
Dehiscence is the opening, at maturity, in a pre-defined way, of a plant structure, such as a fruit, anther, or sporangium, to release its contents. Sometimes this involves the complete detachment of a part. Structures that open in this way are said to be dehiscent...
, i.e. at maturity, it splits apart (dehisces) to release the seed
Seed
A seed is a small embryonic plant enclosed in a covering called the seed coat, usually with some stored food. It is the product of the ripened ovule of gymnosperm and angiosperm plants which occurs after fertilization and some growth within the mother plant...
s within. A few capsules are indehiscent, for example those of Adansonia digitata
Adansonia digitata
Adansonia digitata is the most widespread of the Adansonia species on the African continent, found in the hot, dry savannahs of sub-Saharan Africa. It also grows, having spread secondary to cultivation, in populated areas...
, Alphitonia
Alphitonia
Alphitonia is an arborescent genus of flowering plants with about 20 species, belonging to the buckthorn family of the rosid eudicots. It occurs in tropical regions of Southeast Asia, Oceania and Polynesia. These are large trees or shrubs. In Australia, these plants are often called "ash trees" or...
, and Merciera. In some capsules, the split occurs between carpels, and in others each carpel splits open. In yet others, seeds are released through openings or pores that form in the capsule.

If it is the upper part of the capsule that dehisces, the capsule is also called a pyxis. For example, in the Brazil nut
Brazil Nut
The Brazil nut is a South American tree in the family Lecythidaceae, and also the name of the tree's commercially harvested edible seed.- Order :...
, a lid on the capsule opens, but is too small to release the dozen or so seeds (the actual "Brazil nut" of commerce) within. These germinate inside the capsule after it falls to the ground.

Capsules are sometimes mislabeled as nuts
Nut (fruit)
A nut is a hard-shelled fruit of some plants having an indehiscent seed. While a wide variety of dried seeds and fruits are called nuts in English, only a certain number of them are considered by biologists to be true nuts...
, as in the example of the Brazil nut
Brazil Nut
The Brazil nut is a South American tree in the family Lecythidaceae, and also the name of the tree's commercially harvested edible seed.- Order :...
or the Horse-chestnut
Aesculus
The genus Aesculus comprises 13-19 species of woody trees and shrubs native to the temperate northern hemisphere, with 6 species native to North America and 7-13 species native to Eurasia; there are also several hybrids. Species are deciduous or evergreen...
. A capsule is not a nut because it releases its seeds and it splits apart. Nuts on the other hand do not release seeds as they are a compound ovary
Ovary (plants)
In the flowering plants, an ovary is a part of the female reproductive organ of the flower or gynoecium. Specifically, it is the part of the pistil which holds the ovule and is located above or below or at the point of connection with the base of the petals and sepals...
containing both a single seed and the fruit. Nuts also do not split.

Examples of plants that produce capsules are nigella
Nigella
Nigella is a genus of about 14 species of annual plants in the family Ranunculaceae, native to southern Europe, north Africa, south and southwest Asia. Common names applied to members of this genus are devil-in-a-bush or love in a mist....
, poppy
Papaveraceae
Papaveraceae, informally known as the poppy family, are an economically important family of 44 genera and approximately 770 species of flowering plants in the order Ranunculales. The family is cosmopolitan, occurring in temperate and subtropical climates, but almost unknown in the tropics...
, lily, orchid, willow
Willow
Willows, sallows, and osiers form the genus Salix, around 400 species of deciduous trees and shrubs, found primarily on moist soils in cold and temperate regions of the Northern Hemisphere...
, cotton
Cotton
Cotton is a soft, fluffy staple fiber that grows in a boll, or protective capsule, around the seeds of cotton plants of the genus Gossypium. The fiber is almost pure cellulose. The botanical purpose of cotton fiber is to aid in seed dispersal....
, and jimson weed.