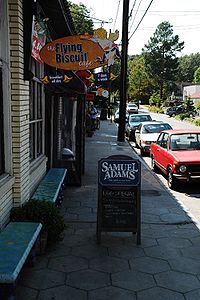 Candler Park is a 55-acre (223,000 m²) city park
City Park
City Park can refer to:Australia*Launceston City ParkCanada* City Park, Saskatoon, a neighbourhoodHungary* City Park Kenya* City Park, NairobiLuxembourg* City Park , a park in central Luxembourg CityUnited Kingdom...
located at 585 Candler Park Drive NE, in Atlanta, Georgia
Atlanta, Georgia
Atlanta is the capital and most populous city in the U.S. state of Georgia. According to the 2010 census, Atlanta's population is 420,003. Atlanta is the cultural and economic center of the Atlanta metropolitan area, which is home to 5,268,860 people and is the ninth largest metropolitan area in...
. It is named after Coca-Cola
Coca-Cola
Coca-Cola is a carbonated soft drink sold in stores, restaurants, and vending machines in more than 200 countries. It is produced by The Coca-Cola Company of Atlanta, Georgia, and is often referred to simply as Coke...
magnate
Magnate
Magnate, from the Late Latin magnas, a great man, itself from Latin magnus 'great', designates a noble or other man in a high social position, by birth, wealth or other qualities...
Asa Griggs Candler
Asa Griggs Candler
Asa Griggs Candler was an American business tycoon who made his fortune selling Coca-Cola. He also served as the 44th Mayor of Atlanta, Georgia from 1916 to 1919...
, who donated this land to the city in 1922. The park features a nine-hole golf course
Golf course
A golf course comprises a series of holes, each consisting of a teeing ground, fairway, rough and other hazards, and a green with a flagstick and cup, all designed for the game of golf. A standard round of golf consists of playing 18 holes, thus most golf courses have this number of holes...
, a swimming pool
Swimming pool
A swimming pool, swimming bath, wading pool, or simply a pool, is a container filled with water intended for swimming or water-based recreation. There are many standard sizes; the largest is the Olympic-size swimming pool...
, a football
American football
American football is a sport played between two teams of eleven with the objective of scoring points by advancing the ball into the opposing team's end zone. Known in the United States simply as football, it may also be referred to informally as gridiron football. The ball can be advanced by...
/soccer field, a basketball court
Basketball court
In basketball, the basketball court is the playing surface, consisting of a rectangular floor with tiles at either end. In professional or organized basketball, especially when played indoors, it is usually made out of a wood, often maple, and highly polished...
, tennis court
Tennis court
A tennis court is where the game of tennis is played. It is a firm rectangular surface with a low net stretched across the center. The same surface can be used to play both doubles and singles.-Dimensions:...
s, and a playground
Playground
A playground or play area is a place with a specific design for children be able to play there. It may be indoors but is typically outdoors...
.

Candler Park is also the name of the neighborhood surrounding the park. It is entirely in the DeKalb
DeKalb County, Georgia
DeKalb County is a county located in the U.S. state of Georgia. The population of the county was 691,893 at the 2010 census. Its county seat is the city of Decatur. It is bordered to the west by Fulton County and contains roughly 10% of the city of Atlanta...
County side of the city, bordering Little Five Points
Little Five Points
Little Five Points is a district of Atlanta, Georgia, United States, 2½ miles east of downtown. It was established in the early 1900s as the commercial district for the adjacent Inman Park and Candler Park neighborhoods to the west and east...
, Lake Claire
Lake Claire (Atlanta)
Lake Claire is a neighborhood in eastern Atlanta, Georgia, United States, comprising approximately 1,200 homes. It is entirely in the DeKalb County side of the city, east of Candler Park, north of Kirkwood, west of Decatur, and south of Druid Hills....
, Inman Park
Inman Park
Inman Park was planned in the late 1880s by Joel Hurt, a civil engineer and real-estate developer who intended to create a rural oasis connected to the city by the first of Atlanta's electric streetcar lines. The East Atlanta Land Company acquired and developed more than 130 acres east of the city...
, Druid Hills
Druid Hills, Georgia
Druid Hills is a community which includes both a census-designated place in unincorporated DeKalb County, Georgia, United States, as well as a neighborhood of the city of Atlanta. The CDP's population was 14,568 at the 2010 census...
, and Edgewood
Edgewood (Atlanta)
Edgewood is a neighborhood located on the east side of Atlanta, Georgia, United States, located approximately three miles east of downtown Atlanta.-History:...
.
The Candler Park Historic District was listed on the National Register of Historic Places
National Register of Historic Places
The National Register of Historic Places is the United States government's official list of districts, sites, buildings, structures, and objects deemed worthy of preservation...
on September 8, 1983, with a boundary increase on March 17, 2005. It includes portions of Lake Claire.

MARTA
Marta
Marta may refer to:* Marta or Marta Vieira da Silva , a Brazilian women's football forward* Marta Estrella, a recurring fictional character from Arrested Development...
rapid transit
Rapid transit
A rapid transit, underground, subway, elevated railway, metro or metropolitan railway system is an electric passenger railway in an urban area with a high capacity and frequency, and grade separation from other traffic. Rapid transit systems are typically located either in underground tunnels or on...
rail service is available at the Edgewood/Candler Park
Edgewood/Candler Park (MARTA station)
Edgewood / Candler Park is an at grade train station on the Blue and is a part-time terminus station on the Green lines of the Metropolitan Atlanta Rapid Transit Authority rail system. It has Single island platform with two tracks. This station was opened on June 30, 1979...
station.