Calcium ATPase is a form of P-ATPase that transfers calcium
Calcium
Calcium is the chemical element with the symbol Ca and atomic number 20. It has an atomic mass of 40.078 amu. Calcium is a soft gray alkaline earth metal, and is the fifth-most-abundant element by mass in the Earth's crust...
after a muscle
Muscle
Muscle is a contractile tissue of animals and is derived from the mesodermal layer of embryonic germ cells. Muscle cells contain contractile filaments that move past each other and change the size of the cell. They are classified as skeletal, cardiac, or smooth muscles. Their function is to...
has contracted. The calcium ATPase are: 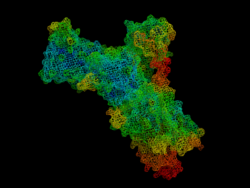 The plasma membrane Ca2+ ATPase (PMCA) is a transport protein
Transport protein
A membrane transport protein is a membrane protein involved in the movement of ions, small molecules, or macromolecules, such as another protein across a biological membrane. Transport proteins are integral membrane proteins; that is they exist within and span the membrane across which they...
in the plasma membrane of cells
Cell (biology)
The cell is the basic structural and functional unit of all known living organisms. It is the smallest unit of life that is classified as a living thing, and is often called the building block of life. The Alberts text discusses how the "cellular building blocks" move to shape developing embryos....
that serves to remove calcium
Calcium
Calcium is the chemical element with the symbol Ca and atomic number 20. It has an atomic mass of 40.078 amu. Calcium is a soft gray alkaline earth metal, and is the fifth-most-abundant element by mass in the Earth's crust...
(Ca2+) from the cell. It is vital for regulating the amount of Ca2+ within cells.
In fact, the PMCA is involved in removing Ca2+ from all eukaryotic cells.
There is a very large transmembrane electrochemical gradient
Electrochemical gradient
An electrochemical gradient is a spatial variation of both electrical potential and chemical concentration across a membrane; that is, a combination of the membrane potential and the pH gradient...
of Ca2+ driving the entry of the ion
Ion
An ion is an atom or molecule in which the total number of electrons is not equal to the total number of protons, giving it a net positive or negative electrical charge. The name was given by physicist Michael Faraday for the substances that allow a current to pass between electrodes in a...
into cells, yet it is very important for cells to maintain low concentration
Concentration
In chemistry, concentration is defined as the abundance of a constituent divided by the total volume of a mixture. Four types can be distinguished: mass concentration, molar concentration, number concentration, and volume concentration...
s of Ca2+ for proper cell signalling; thus it is necessary for the cell to employ ion pumps to remove the Ca2+.
The PMCA and the sodium calcium exchanger (NCX) are together the main regulators of intracellular Ca2+ concentrations.
Since it transports Ca2+ into the extracellular space, the PMCA is also an important regulator of the calcium concentration in the extracellular space.

The PMCA belongs to a family of P-type primary ion transport ATPases that form an aspartyl phosphate intermediate.

The PMCA is expressed in a variety of tissues
Tissue (biology)
Tissue is a cellular organizational level intermediate between cells and a complete organism. A tissue is an ensemble of cells, not necessarily identical, but from the same origin, that together carry out a specific function. These are called tissues because of their identical functioning...
, including the brain
Brain
The brain is the center of the nervous system in all vertebrate and most invertebrate animals—only a few primitive invertebrates such as sponges, jellyfish, sea squirts and starfishes do not have one. It is located in the head, usually close to primary sensory apparatus such as vision, hearing,...
.

SERCA resides in the sarcoplasmic reticulum (SR) within muscle cells. It is a Ca2+ ATPase that transfers Ca2+ from the cytosol
Cytosol
The cytosol or intracellular fluid is the liquid found inside cells, that is separated into compartments by membranes. For example, the mitochondrial matrix separates the mitochondrion into compartments....
of the cell to the lumen
Lumen (anatomy)
A lumen in biology is the inside space of a tubular structure, such as an artery or intestine...
of the SR at the expense of ATP hydrolysis
ATP hydrolysis
ATP hydrolysis is the reaction by which chemical energy that has been stored and transported in the high-energy phosphoanhydridic bonds in ATP is released, for example in the muscles, to produce work. The product is ADP and an inorganic phosphate, orthophosphate...
during muscle relaxation.