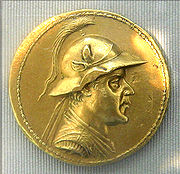 The Cabinet des Médailles, more formally known as Département des Monnaies, Médailles et Antiques de la Bibliothèque nationale de France, is a department of the Bibliothèque nationale de France
Bibliothèque nationale de France
The is the National Library of France, located in Paris. It is intended to be the repository of all that is published in France. The current president of the library is Bruno Racine.-History:...
in Paris
Paris
Paris is the capital and largest city in France, situated on the river Seine, in northern France, at the heart of the Île-de-France region...
, France
France
The French Republic , The French Republic , The French Republic , (commonly known as France , is a unitary semi-presidential republic in Western Europe with several overseas territories and islands located on other continents and in the Indian, Pacific, and Atlantic oceans. Metropolitan France...
, housed in its former premises in Rue de Richelieu
Rue de Richelieu
Rue de Richelieu is a long street of Paris, starting in the south of the Ier arrondissement, ending in the IIe arrondissement. For the first half of the nineteenth century, before Baron Hausmann redefined Paris with grand boulevards, it was one of the most fashionable streets of Paris:The Rue de...
.

The Cabinet des Médailles is a museum containing internationally important collections of coins, engraved gems, and antiquities, with its distant origins in the treasuries of the French kings of the Middle Ages. The disruptions of the Wars of Religion
French Wars of Religion
The French Wars of Religion is the name given to a period of civil infighting and military operations, primarily fought between French Catholics and Protestants . The conflict involved the factional disputes between the aristocratic houses of France, such as the House of Bourbon and House of Guise...
inspired Charles IX
Charles IX of France
Charles IX was King of France, ruling from 1560 until his death. His reign was dominated by the Wars of Religion. He is best known as king at the time of the St. Bartholomew's Day Massacre.-Childhood:...
(1560-1574) to create the position of a garde particulier des médailles et antiques du roi a "guardian entrusted specifically with the medals and ancient coins and antiquities of the Crown". Thus the collection, which has been augmented and never again dispersed, passed from being the personal collection of the king to becoming a national property - a bien national - as the royal collection was declared during the Revolution
French Revolution
The French Revolution , sometimes distinguished as the 'Great French Revolution' , was a period of radical social and political upheaval in France and Europe. The absolute monarchy that had ruled France for centuries collapsed in three years...
. A stage in this aspect of its development was the bequest of the collection of pioneering archeologist comte de Caylus, who knew that in this fashion his antiquities would be most accessible to scholars. Other collectors followed suit: when the duc de Luynes
Honoré Théodore Paul Joseph d'Albert, duc de Luynes
Honoré Théodore Paul Joseph d'Albert, duc de Luynes , inheritor of several French titles as duc de Luynes, de Chevreuse et de Chaulnes and an immense fortune, who cut a figure of grand seigneur and supported the exiled comte de Chambord's claim to the throne of France, is remembered most for the...
gave his collection of Greek coins to the Cabinet Impérial in 1862, it was a national collection rather than simply an Imperial one he was enriching. The State also added to the treasury contained in the Cabinet des Médailles: a notable addition, in 1846, was the early sixth century gold Treasure of Gourdon
Treasure of Gourdon
The Treasure of Gourdon , unearthed near Gourdon, Saône-et-Loire, in 1845, is a hoard of gold, the objects dating to the end of the fifth or beginning of the sixth century, which was secreted soon after 524...
.

The Cabinet - a term which in French implies a small private room for the conservation and display of intimate works of art and for private conversations, rather than a piece of furniture - took a stable shape under Henry IV
Henry IV of France
Henry IV , Henri-Quatre, was King of France from 1589 to 1610 and King of Navarre from 1572 to 1610. He was the first monarch of the Bourbon branch of the Capetian dynasty in France....
, who nominated connoisseur Rascas de Bagarris
Rascas de Bagarris
Pierre-Antoine Rascas, sieur de Bagarris et du Bourguet , an advocate at the Parlement of Aix, was a founder of the science of historical numismatics and one of the most notable antiquaries of his time...
garde particulier des médailles et antiques du roi, the "particular guardian of the medals and antiquities of the King". 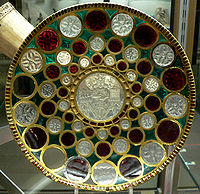 Among the antiquarians and scholars who have had the charge of the Cabinet des Médailles, one of the most outstanding was Théophile Marion Dumersan
Théophile Marion Dumersan
Théophile Marion Dumersan was a French writer of plays, vaudevilles, poetry, novels, chanson collections, librettos, and novels, as well as a numismatist and curator attached to the Cabinet des médailles et antiques of the Bibliothèque royale.-Life:The family's real surname was Marion but – to...
, who began working there in 1795 at the age of sixteen, protected the collection from dispersal by the allies after Napoleon's defeat, and published at his own expense a history of the collection and description, as newly-rearranged according to historical principles, in 1838

Louis XIV of France
Louis XIV of France
Louis XIV , known as Louis the Great or the Sun King , was a Bourbon monarch who ruled as King of France and Navarre. His reign, from 1643 to his death in 1715, began at the age of four and lasted seventy-two years, three months, and eighteen days...
, an acquisitive connoisseur, brought together the cabinet de curiosités of his uncle Gaston d'Orléans
Gaston, Duke of Orléans
Gaston of France, , also known as Gaston d'Orléans, was the third son of King Henry IV of France and his wife Marie de Medici. As a son of the king, he was born a Fils de France. He later acquired the title Duke of Orléans, by which he was generally known during his adulthood...
and acquired that of Hippolyte de Béthune, the nephew of Henri IV's minister Sully
Maximilien de Béthune, duc de Sully
Maximilien de Béthune, first Duke of Sully was the doughty soldier, French minister, staunch Huguenot and faithful right-hand man who assisted Henry IV of France in the rule of France.-Early years:...
. In order to keep the collections closer at hand, he removed them from the old royal library in Paris to Versailles
Palace of Versailles
The Palace of Versailles , or simply Versailles, is a royal château in Versailles in the Île-de-France region of France. In French it is the Château de Versailles....
.

When Louis' great-grandson Louis XV
Louis XV of France
Louis XV was a Bourbon monarch who ruled as King of France and of Navarre from 1 September 1715 until his death. He succeeded his great-grandfather at the age of five, his first cousin Philippe II, Duke of Orléans, served as Regent of the kingdom until Louis's majority in 1723...
had attained majority, the Cabinet was returned to Paris in 1724, to take up its present space in the royal library that was designed under the direction of Jules-Robert de Cotte
Jules-Robert de Cotte
Jules-Robert de Cotte was a renowned French architect, the son of one of the most highly regarded architect-administrators of his era, Robert de Cotte....
, the son of Mansart's successor at the Bâtiments du Roi
Bâtiments du Roi
The Bâtiments du Roi was a division of Department of the household of the Kings of France in France under the Ancien Régime. It was responsible for building works at the King's residences in and around Paris.-History:...
. In the Cabinet des Médailles, the medal-cabinet delivered in 1739 by the ébéniste du roi
Ébéniste
Ébéniste is the French word for a cabinetmaker, whereas in French menuisier denotes a woodcarver or chairmaker. The English equivalent for "ébéniste," "ebonist," is never commonly used. Originally, an ébéniste was one who worked with ebony, a favoured luxury wood for mid-seventeenth century...
Antoine Gaudreau
Antoine Gaudreau
Antoine-Robert Gaudreau was a Parisian ébéniste who was appointed Ébéniste du Roi and was the principal supplier of furniture for the royal châteaux during the early years of Louis XV's reign. He is largely known through the copious documentation of the Garde-Meuble de la Couronne; he entered the...
figures among the greatest pieces of French furniture. Other medal cabinets were delivered for Louis XIV by André-Charles Boulle. The cabinet also still houses its paintings by Boucher
François Boucher
François Boucher was a French painter, a proponent of Rococo taste, known for his idyllic and voluptuous paintings on classical themes, decorative allegories representing the arts or pastoral occupations, intended as a sort of two-dimensional furniture...
, Natoire and Van Loo.

The Cabinet des Médailles is considered the oldest museum in France. It is located in the former building of the Bibliothèque Nationale, 58 rue Richelieu, Paris I, and can be visited for free every afternoon (13:00-17:00), seven days a week.