The Rue de Richelieu is called the Bond-street of Paris. Parallel with it, is the Rue Vivienne. They are both pleasant streets; especially the former, which is much longer, and is rendered more striking by containing some of the finest hotels in Paris. Hosiers, artificial flower makers, clock-makers, and jewellers, are the principal tradesmen in the Rue de Richelieu; but it has no similarity with Bond-street. The houses are of stone, and generally very lofty—while the Academie de Musique and the Bibliotheque du Roi are public buildings of such consequence and capacity (especially the former) that it is absurd to name the street in which they are situated with our own. The Rue Vivienne is comparatively short; but it is pleasing, from the number of flowers, shrubs, and fruits, brought thither from the public markets for sale. No doubt the Place Vendome and the Rue de la Paix claim precedence, on the score of magnificence and comfort, to either of these, or to any other streets; but to my taste there is nothing (next to the Boulevards) which is so thoroughly gratifying as the Rue de Richelieu. Is it because some few hundred thousand printed volumes are deposited therein?
.

Today it is most notable for scattered coin dealers and currency changers, being near the stock market (the Bourse).

The name comes from Cardinal de Richelieu, Prime minister of King Louis XIII
Louis XIII of France
Louis XIII was a Bourbon monarch who ruled as King of France and of Navarre from 1610 to 1643.Louis was only eight years old when he succeeded his father. His mother, Marie de Medici, acted as regent during Louis' minority...
.

The street was originally called Rue Royale, then rue de Richelieu soon after. The name was changed to Rue de la Loi during the French Revolution
French Revolution
The French Revolution , sometimes distinguished as the 'Great French Revolution' , was a period of radical social and political upheaval in France and Europe. The absolute monarchy that had ruled France for centuries collapsed in three years...
; its name was given back in 1806. 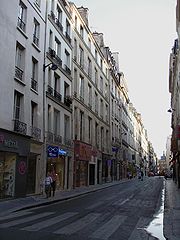