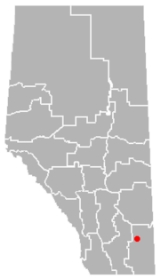 The base has its own radio station, CKBF-FM
CKBF-FM
CKBF-FM is a Canadian radio station, which broadcasts at 104.1 FM at CFB Suffield in the province of Alberta. The station airs a mixture of news and music programming, some produced locally for British and Canadian personnel stationed at the base, and some syndicated from the British Forces...
, which airs programming for both the Canadian and British military personnel stationed at the base.

On August 25, 1971, the Canadian Government
Government of Canada
The Government of Canada, formally Her Majesty's Government, is the system whereby the federation of Canada is administered by a common authority; in Canadian English, the term can mean either the collective set of institutions or specifically the Queen-in-Council...
ratified a ten-year agreement with the British Government
Government of the United Kingdom
Her Majesty's Government is the central government of the United Kingdom of Great Britain and Northern Ireland. The Government is led by the Prime Minister, who selects all the remaining Ministers...
that allowed the British Armed Forces
British Armed Forces
The British Armed Forces are the armed forces of the United Kingdom of Great Britain and Northern Ireland.Also known as Her Majesty's Armed Forces and sometimes legally the Armed Forces of the Crown, the British Armed Forces encompasses three professional uniformed services, the Royal Navy, the...
to use the northern three quarters of the Suffield Block
Suffield Block
The Suffield Block is an area located within Cypress County, southern Alberta, Canada approximately bounded by Highway 884 on the west, Highway 555 on the north,the South Saskatchewan River on the east and the Trans-Canada Highway on the south...
. On December 1, 1971, the Canadian Forces Base Suffield (CFB Suffield) was officially created and allocated to Mobile Command. By January 1972, the British Army Training Unit Suffield
British Army Training Unit Suffield
The British Army Training Unit Suffield is a British Army unit located at the vast training area of Canadian Forces Base Suffield in Alberta, Canada...
(BATUS) was established and the first live round was fired by a battlegroup
Battlegroup (army)
A battlegroup , or task force in modern military theory, is the basic building block of an army's fighting force. A battlegroup is formed around an infantry battalion or armoured regiment, which is usually commanded by a Lieutenant Colonel...
from the 4th Royal Tank Regiment
4th Royal Tank Regiment
The 4th Royal Tank Regiment was an armoured regiment of the British Army until 1993. It was part of the Royal Tank Regiment, itself part of the Royal Armoured Corps...
(4th RTR) on July 15, 1972.

In 1996/1997, CFB Suffield had two recognized Federal Heritage buildings on the Register of the Government of Canada Heritage Buildings: Central Laboratory, Building B-1 and Ralston School Recognized.

Following the fall of Algeria
Algeria
Algeria , officially the People's Democratic Republic of Algeria , also formally referred to as the Democratic and Popular Republic of Algeria, is a country in the Maghreb region of Northwest Africa with Algiers as its capital.In terms of land area, it is the largest country in Africa and the Arab...
to Nazi Germany
Nazi Germany
Nazi Germany , also known as the Third Reich , but officially called German Reich from 1933 to 1943 and Greater German Reich from 26 June 1943 onward, is the name commonly used to refer to the state of Germany from 1933 to 1945, when it was a totalitarian dictatorship ruled by...
, the British Army
British Army
The British Army is the land warfare branch of Her Majesty's Armed Forces in the United Kingdom. It came into being with the unification of the Kingdom of England and Scotland into the Kingdom of Great Britain in 1707. The new British Army incorporated Regiments that had already existed in England...
required a new training facility for carrying out experiments in chemical warfare
Chemical warfare
Chemical warfare involves using the toxic properties of chemical substances as weapons. This type of warfare is distinct from Nuclear warfare and Biological warfare, which together make up NBC, the military acronym for Nuclear, Biological, and Chemical...
. In 1941, the federal government expropriated the Suffield Block, purchasing the majority of the land from the Canadian Pacific Railway
Canadian Pacific Railway
The Canadian Pacific Railway , formerly also known as CP Rail between 1968 and 1996, is a historic Canadian Class I railway founded in 1881 and now operated by Canadian Pacific Railway Limited, which began operations as legal owner in a corporate restructuring in 2001...
and the Hudson's Bay Company
Hudson's Bay Company
The Hudson's Bay Company , abbreviated HBC, or "The Bay" is the oldest commercial corporation in North America and one of the oldest in the world. A fur trading business for much of its existence, today Hudson's Bay Company owns and operates retail stores throughout Canada...
; 452 residents were displaced. Experimental Station Suffield
Experimental Station Suffield
The military research facility located north of Suffield, Alberta, operated under the name of the Experimental Station Suffield from its inception into 1941 to its renaming to the Suffield Experimental Station in 1950....
commenced operations on June 11, 1941.

In 1971 an agreement was signed between the British and Canadian governments permitting the British Army to use over three-quarters of the Suffield Block for armoured, infantry, and artillery live-fire training. DRES was renamed Canadian Forces Base Suffield (CFB Suffield) and new base housing and support facilities were constructed for the British Army and Canadian Forces personnel, including refurbishing the community at Ralston
Ralston, Alberta
The Crown Village of Ralston is located on CFB Suffield within Cypress County in southern Alberta, Canada, approximately north of the Hamlet of Suffield. Approval was given in August 1947 for the construction of 60 prefabricated housing units for scientists, technologists, and military personnel...
. DRES continued until 2000 when it was merged into a new organization Defence Research and Development Canada (DRDC).

Defence Research and Development Canada (DRDC) is an agency of the Canadian Department of National Defence
Department of National Defence (Canada)
The Department of National Defence , frequently referred to by its acronym DND, is the department within the government of Canada with responsibility for all matters concerning the defence of Canada...
responding to the scientific
Military science
Military science is the process of translating national defence policy to produce military capability by employing military scientists, including theorists, researchers, experimental scientists, applied scientists, designers, engineers, test technicians, and military personnel responsible for...
and technological
Military technology
Military technology is the collection of equipment, vehicles, structures and communication systems that are designed for use in warfare. It comprises the kinds of technology that are distinctly military in nature and not civilian in application, usually because they are impractical in civilian...
needs of the Canadian Forces. Its mission is to ensure that the CF remains scientifically and operationally relevant. The agency is made up of six research laboratories, one of which being DRDC Suffield
DRDC Suffield
DRDC Suffield is a major Canadian military research facility located north of Suffield, Alberta and is one of seven centres making up Defence Research and Development Canada .-History:...
. DRDC Suffield is the lead laboratory for Chemical and Biological Defence research, as well as in areas generally related to military engineering, mobility systems, and weapons system evaluation.