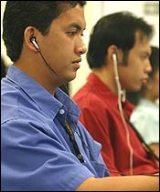 The business process outsourcing
Business process outsourcing
Business process outsourcing is a subset of outsourcing that involves the contracting of the operations and responsibilities of specific business functions to a third-party service provider. Originally, this was associated with manufacturing firms, such as Coca Cola that outsourced large segments...
industry in the Philippines has grown 46% annually since 2006. This boom is led by demand for offshore
Offshoring
Offshoring describes the relocation by a company of a business process from one country to another—typically an operational process, such as manufacturing, or supporting processes, such as accounting. Even state governments employ offshoring...
call centers. Industry estimates from the Board of Investments, Business Process Association onf the Philippines (BPA/P) and BPO Services Association (BSA/U) put the number of people employed by the BPO sector by end of 2008 at 435,000 (vs 372,000 in 2007)- excluding the non-BOI/ non-PEZA entities. The BPO output for 2008 was US$ 6.1B (vs US$ 4.5B in 2007), putting the Philippines as the 3rd largest BPO destination (15%) after India (37%) and Canada (27%). It was expected to hit US$ 7.2B to 7.5B in 2009. The industry was optimistic of 18% growth in headcount 2009.

Overall, Philippine BPO is forecast to earn between US $11 to 13 billion and to employ 900,000 additional people in 2010. To achieve and sustain this growth, the Philippine government offered fiscal and non-fiscal incentives to attract foreign direct investment in these industries as part of the 2007 Investment Priorities Plan. The IPP was prepared by the Board of Investments (BOI), as the lead agency in promoting investments, focused on the sectors identified in the Medium-Term Philippine Development Plan (MTPDP) 2004-2010 (PBOI 2006).


Call Centre Industry in the Philippines

In the Philippines, call centres or call centers
Call centre
A call centre or call center is a centralised office used for the purpose of receiving and transmitting a large volume of requests by telephone. A call centre is operated by a company to administer incoming product support or information inquiries from consumers. Outgoing calls for telemarketing,...
actually began as plain providers of email response and managing services. The call center industry comprises 80% of the outsourcing industry in the country.

The Philippines has less expensive operational and labor costs, as well as an English
English language
English is a West Germanic language that arose in the Anglo-Saxon kingdoms of England and spread into what was to become south-east Scotland under the influence of the Anglian medieval kingdom of Northumbria...
-speaking workforce as a result of English being one of two official languages. English is also one of the major subjects in all educational levels. In 2007, The Philippines remained a top BPO destination for the estimated $150-billion business process outsourcing industry. 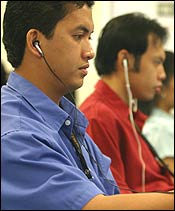 Fueling the recent growth spurt in the outsourcing industry in the Philippines are more higher-end outsourcing services such as Web design, software development, and animation (Shameen 2006).

Major studios like Disney, Marvel, Warner Brothers and Hanna Barbera have offices in the Philippines (CNN 1995). Some of the latest works of Filipino animators include scenes in Pixar's Finding Nemo
Finding Nemo
Finding Nemo is a 2003 American comi-drama animated film written by Andrew Stanton, directed by Andrew Stanton and Lee Unkrich and produced by Pixar. It tells the story of the overly protective clownfish Marlin who, along with a regal tang called Dory , searches for his abducted son Nemo...
, Paramount Picture's Barnyard and Twentieth Century-Fox's Anastasia
Anastasia
Anastasia is a personal name and the female form of the Greek male name Anastasius/Anastasios meaning "resurrection." The name, and its male counterpart, were often given to Greek children born around December 2 or around Easter during the early days of Christianity. It is the name of several...
(ABS-CBN Interactive 2004).