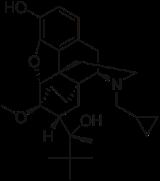 Overview
Buprenorphine is a semi-synthetic opioid
Opioid
An opioid is a psychoactive chemical that works by binding to opioid receptors, which are found principally in the central and peripheral nervous system and the gastrointestinal tract...
that is used to treat opioid addiction in higher dosages (>2 mg), to control moderate acute pain
Pain
Pain is an unpleasant sensation often caused by intense or damaging stimuli such as stubbing a toe, burning a finger, putting iodine on a cut, and bumping the "funny bone."...
in non-opioid tolerant individuals in lower dosages (~200 µg), and to control moderate chronic pain
Chronic pain
Chronic pain has several different meanings in medicine. Traditionally, the distinction between acute and chronic pain has relied upon an arbitrary interval of time from onset; the two most commonly used markers being 3 months and 6 months since the initiation of pain, though some theorists and...
in dosages ranging from 20-70 µg/hour.

Buprenorphine is one of the Bentley compounds
Bentley compounds
Bentley compounds are a class of semi-synthetic opioids that were first synthesized from thebaine by K. W. Bentley. The compounds include: oxycodone, oxymorphone, nalbuphine, naloxone, naltrexone, buprenorphine and etorphine. They represent the first series of more potent μ-opioid agonists, with...
derived from an alkaloid
Alkaloid
Alkaloids are a group of naturally occurring chemical compounds that contain mostly basic nitrogen atoms. This group also includes some related compounds with neutral and even weakly acidic properties. Also some synthetic compounds of similar structure are attributed to alkaloids...
of the plant Papaver somniferum (the opium poppy), known as thebaine
Thebaine
Thebaine , its name coming from the Greek Θῆβαι, Thēbai, an ancient city in Upper Egypt, is an opiate alkaloid. A minor constituent of opium, thebaine is chemically similar to both morphine and codeine, but has stimulatory rather than depressant effects, causing convulsions similar to strychnine...
.

This was supposely found in my urine test. i am on met program. i do not know what it is and only use medication from my doctor. i have never had an ...
More

Can u take this and methadone together?
More
x