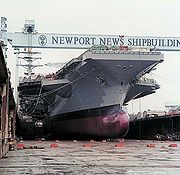 A bulbous bow is a protruding bulb at the bow
Bow (ship)
The bow is a nautical term that refers to the forward part of the hull of a ship or boat, the point that is most forward when the vessel is underway. Both of the adjectives fore and forward mean towards the bow...
(or front) of a ship just below the waterline
Waterline
The term "waterline" generally refers to the line where the hull of a ship meets the water surface. It is also the name of a special marking, also known as the national Load Line or Plimsoll Line, to be positioned amidships, that indicates the draft of the ship and the legal limit to which a ship...
. The bulb modifies the way the water flows around the hull
Hull (watercraft)
A hull is the watertight body of a ship or boat. Above the hull is the superstructure and/or deckhouse, where present. The line where the hull meets the water surface is called the waterline.The structure of the hull varies depending on the vessel type...
, reducing drag
Drag (physics)
In fluid dynamics, drag refers to forces which act on a solid object in the direction of the relative fluid flow velocity...
and thus increasing speed, range, fuel efficiency
Fuel efficiency
Fuel efficiency is a form of thermal efficiency, meaning the efficiency of a process that converts chemical potential energy contained in a carrier fuel into kinetic energy or work. Overall fuel efficiency may vary per device, which in turn may vary per application, and this spectrum of variance is...
, and stability. Large ships with bulbous bows generally have a twelve to fifteen percent better fuel efficiency than similar vessels without them.

Bulbous bows have been found to be most effective when used in vessels that meet the following conditions:
Thus large vessels that cross large bodies of water near their best speed will benefit from a bulbous bow. This would include naval vessels, cargo ships, passenger ships, tankers and supertankers. All of these ships tend to be large and usually operate within a small range of speeds close to their top speed.
Bulbous bows are less beneficial in smaller craft and may actually be detrimental to their performance and economy. Thus, they are rarely used on recreational craft like powerboats, sailing vessels, tug boats, fishing trawlers and yachts.

In a conventionally shaped bow, a bow wave
Bow wave
A bow wave is the wave that forms at the bow of a ship when it moves through the water. As the bow wave spreads out, it defines the outer limits of a ship's wake. A large bow wave slows the ship down, poses a risk to smaller boats, and in a harbor can cause damage to shore facilities and moored ships...
forms immediately before the bow. When a bulb is placed below the water ahead of this wave, water is forced to flow up over the bulb. If the trough formed by water flowing off the bulb coincides with the bow wave, the two partially cancel out and reduce the vessel's wake. While inducing another wave stream saps energy from the ship, canceling out the second wave stream at the bow changes the pressure distribution along the hull, thereby reducing wave resistance. The effect that pressure distribution has on a surface is known as the form effect.

Some explanations note that water flowing over the bulb depresses the ship's bow and keeps it trimmed better. Since many of the bulbous bows are symmetrical or even angled upwards which would tend to raise the bow further, the improved trim is likely a by-product of the reduced wave action as the vessel approaches hull speed
Hull speed
Hull speed, sometimes referred to as displacement speed, is the speed of a boat at which the bow and stern waves interfere constructively, creating relatively large waves, and thus a relatively large value of wave drag...
, rather than direct action of water flow over the bulb. 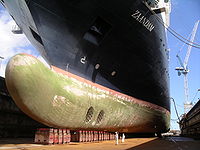 A sharp bow on a conventional hull form would produce waves and low drag like a bulbous bow, but waves coming from the side would strike it harder. Also, in heavy seas, water flowing around the bulb dampens pitching movements like a squiggle keel
Keel
In boats and ships, keel can refer to either of two parts: a structural element, or a hydrodynamic element. These parts overlap. As the laying down of the keel is the initial step in construction of a ship, in British and American shipbuilding traditions the construction is dated from this event...
. The blunt bulbous bow also produces higher pressure in a large region in front, making the bow wave start earlier.

The addition of a bulb to a ship's hull increases its overall wetted area. As wetted area increases, so does drag. At greater speeds and in larger vessels it is the bow wave that is the greatest force impeding the vessel's forward motion through the water. For a vessel that is small or spends a great deal of its time at a slow speed, the increase in drag will not offset the benefit in dampening bow wave generation. As the wave counter effects are only significant at the vessel's higher range of speed, bulbous bows are not energy efficient when the vessel cruises outside of these ranges, specifically at lower speeds.

The bulbous bow concept is credited to David W. Taylor
David W. Taylor
Rear Admiral David Watson Taylor, USN was a naval architect and engineer of the United States Navy. He served during World War I as Chief Constructor of the Navy, and Chief of the Bureau of Construction and Repair...
, a naval architect who served as Chief Constructor of the Navy [USA] during the First World War. The concept (known as a bulbous forefoot) was first introduced in his design of the , which entered service in 1910. The bow design did not initially enjoy wide acceptance. This all changed in the 1920s, with Germany's launching the and the . They were referred to as Germany's North Atlantic grey hounds, two large commercial ocean liner
Ocean liner
An ocean liner is a ship designed to transport people from one seaport to another along regular long-distance maritime routes according to a schedule. Liners may also carry cargo or mail, and may sometimes be used for other purposes .Cargo vessels running to a schedule are sometimes referred to as...
s that competed for the trans-Atlantic passenger trade. Both ships won the coveted Blue Riband
Blue Riband
The Blue Riband is an unofficial accolade given to the passenger liner crossing the Atlantic Ocean in regular service with the record highest speed. The term was borrowed from horse racing and was not widely used until after 1910. Under the unwritten rules, the record is based on average speed...
, the Bremen in 1929 with a crossing speed of 27.9 knots (15.2 m/s), and the Europa exceeding her in 1930 with a crossing speed of 27.91 knots.

The design began to be incorporated elsewhere, as seen in the U.S. built Malolo, President Hoover and President Coolidge, passenger liners launched in the late 1920s and early 1930s. Still the idea was largely viewed as experimental by many ship builders and owners.

In 1935 the French superliner coupled a bulbous forefoot with massive size and a redesigned hull shape. She was able to achieve speeds in excess of 30 knots (56 km/h). The Normandie was famous for many things, among which included her clean entry into the water and markedly reduced bow wave. Normandies great rival, the British liner achieved equivalent speeds with a non-bulbous traditional stem and hull design. However, a crucial difference lay in the fact that Normandie achieved these speeds with approximately thirty percent less engine horsepower than Queen Mary—and with a corresponding reduction in fuel use.

The modern bulbous bow was developed by Dr. Takao Inui at the University of Tokyo during the 1950s and 1960s, independently of Japanese naval research. Inui based his research on earlier findings by scientists made after Taylor discovered that ships fitted with a bulbous forefoot exhibited substantially lower drag characteristics than predicted. The bulbous bow concept was first definitively studied by Thomas Havelock, Cyril Wigley and Georg Weinblum, including Wigley's 1936 work "The Theory of the Bulbous Bow and its Practical Application" which examined the issues of wave production and dampening. Inui's initial scientific papers on the effect of bulbous bow on wavemaking resistance were collected into a report published by the University of Michigan in 1960. His work came to widespread attention with his paper "Wavemaking Resistance of Ships" published by the Society of Naval Architects and Marine Engineers in 1962. It was eventually found that drag could be reduced by about five percent. Experimentation and refinement slowly improved the geometry of bulbous bows, but they were not widely exploited until computer modelling techniques enabled researchers at the University of British Columbia
University of British Columbia
The University of British Columbia is a public research university. UBC’s two main campuses are situated in Vancouver and in Kelowna in the Okanagan Valley...
to increase their performance to a practical level in the 1980s.

Some warships specialized for anti-submarine warfare
Anti-submarine warfare
Anti-submarine warfare is a branch of naval warfare that uses surface warships, aircraft, or other submarines to find, track and deter, damage or destroy enemy submarines....
use a specifically shaped bulb as a hydrodynamic housing for a sonar
Sonar
Sonar is a technique that uses sound propagation to navigate, communicate with or detect other vessels...
transducer
Transducer
A transducer is a device that converts one type of energy to another. Energy types include electrical, mechanical, electromagnetic , chemical, acoustic or thermal energy. While the term transducer commonly implies the use of a sensor/detector, any device which converts energy can be considered a...
, which resembles a bulbous bow but the hydrodynamic effects are only incidental. The transducer is a large cylinder or sphere composed of a phased array
Phased array
In wave theory, a phased array is an array of antennas in which the relative phases of the respective signals feeding the antennas are varied in such a way that the effective radiation pattern of the array is reinforced in a desired direction and suppressed in undesired directions.An antenna array...
of acoustic
Acoustics
Acoustics is the interdisciplinary science that deals with the study of all mechanical waves in gases, liquids, and solids including vibration, sound, ultrasound and infrasound. A scientist who works in the field of acoustics is an acoustician while someone working in the field of acoustics...
transducers. The entire compartment is flooded with water and the acoustic window of the bulb is made of fiber-reinforced plastic or another material (such as rubber
Rubber
Natural rubber, also called India rubber or caoutchouc, is an elastomer that was originally derived from latex, a milky colloid produced by some plants. The plants would be ‘tapped’, that is, an incision made into the bark of the tree and the sticky, milk colored latex sap collected and refined...
) transparent to underwater sounds as they are transmitted and received. The transducer bulb places the sonar equipment at the greatest possible distance from the ships own noise generating propulsion system.