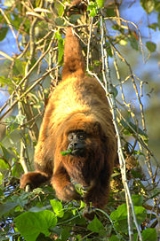 Encyclopedia
The Brown howler also known as Brown howling monkey, is a species of howler monkey
Howler monkey
Howler monkeys are among the largest of the New World monkeys. Fifteen species are currently recognised. Previously classified in the family Cebidae, they are now placed in the family Atelidae. These monkeys are native to South and Central American forests...
, a type of New World monkey
New World monkey
New World monkeys are the five families of primates that are found in Central and South America: Callitrichidae, Cebidae, Aotidae, Pitheciidae, and Atelidae. The five families are ranked together as the Platyrrhini parvorder and the Ceboidea superfamily, which are essentially synonymous since...
, that lives in forests in south-eastern Brazil
Brazil
Brazil , officially the Federative Republic of Brazil , is the largest country in South America. It is the world's fifth largest country, both by geographical area and by population with over 192 million people...
and far north-eastern Argentina
Argentina
Argentina , officially the Argentine Republic , is the second largest country in South America by land area, after Brazil. It is constituted as a federation of 23 provinces and an autonomous city, Buenos Aires...
(Misiones
Misiones Province
Misiones is one of the 23 provinces of Argentina, located in the northeastern corner of the country in the Mesopotamiсa region. It is surrounded by Paraguay to the northwest, Brazil to the north, east and south, and Corrientes Province of Argentina to the southwest.- History :The province was...
). It lives in groups of 2 to 11 individuals. Despite the name "brown howler", it is notably variable in colour, with some individuals appearing largely reddish-orange or black.