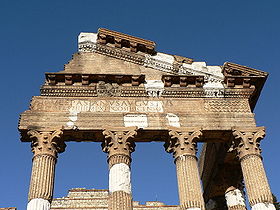 Brixia is the Latin name of the modern city of Brescia
Brescia
Brescia is a city and comune in the region of Lombardy in northern Italy. It is situated at the foot of the Alps, between the Mella and the Naviglio, with a population of around 197,000. It is the second largest city in Lombardy, after the capital, Milan...
in Northern Italy
Italy
Italy , officially the Italian Republic languages]] under the European Charter for Regional or Minority Languages. In each of these, Italy's official name is as follows:;;;;;;;;), is a unitary parliamentary republic in South-Central Europe. To the north it borders France, Switzerland, Austria and...
.
Its location was first settled in the 7th century BC
7th century BC
The 7th century BC started the first day of 700 BC and ended the last day of 601 BC.The Assyrian Empire continued to dominate the Near East during this century, exercising formidable power over neighbors like Babylon and Egypt. In the last two decades of the century, however, the empire began to...
by a tribe of Gauls
Gauls
The Gauls were a Celtic people living in Gaul, the region roughly corresponding to what is now France, Belgium, Switzerland and Northern Italy, from the Iron Age through the Roman period. They mostly spoke the Continental Celtic language called Gaulish....
(themselves part of the Celts), which were the inhabitants of this part of Italy before the Roman
Ancient Rome
Ancient Rome was a thriving civilization that grew on the Italian Peninsula as early as the 8th century BC. Located along the Mediterranean Sea and centered on the city of Rome, it expanded to one of the largest empires in the ancient world....
conquest (see also Gallia Cisalpina). The name of the tribe was Cœnomani
Cenomani (Cisalpine Gaul)
The Cenomani , was an ancient tribe of the Cisalpine Gauls, who occupied the tract north of the Padus , between the Insubres on the west and the Veneti on the east. Their territory appears to have extended from the river Addua to the Athesis...
, and the name of the city comes from their language. It is most likely related to a root meaning "hill" although the correct etymology is uncertain.

The small village of the beginning was already a sizable town when the Romans
Roman Republic
The Roman Republic was the period of the ancient Roman civilization where the government operated as a republic. It began with the overthrow of the Roman monarchy, traditionally dated around 508 BC, and its replacement by a government headed by two consuls, elected annually by the citizens and...
defeated the Italian Gauls in the 3rd century BC and annexed their territory, although, after their fashion, letting them keep most of their traditions and customs. The Gauls of Brescia became then a reliable ally, which gained them already in the 1st century BC the status of Roman citizens and their city the title of municipium
Municipium
Municipium , the prototype of English municipality, was the Latin term for a town or city. Etymologically the municipium was a social contract between municipes, the "duty holders," or citizens of the town. The duties, or munera, were a communal obligation assumed by the municipes in exchange for...
. This meant that the people of Brescia were entitled to a degree of self-administration and that the city was the seat of local Roman authorities (which held their office in the local Curia
Curia
A curia in early Roman times was a subdivision of the people, i.e. more or less a tribe, and with a metonymy it came to mean also the meeting place where the tribe discussed its affairs...
).

The most important archaeological findings of Roman times are the Capitolium temple complex and the two domus
Domus
In ancient Rome, the domus was the type of house occupied by the upper classes and some wealthy freedmen during the Republican and Imperial eras. They could be found in almost all the major cities throughout the Roman territories...
that can be visited in the Museum of Santa Giulia. These domus, incidentally, are among the best preserved in Northern Italy and let us glimpse into a distant world that can otherwise be seen only in places like Pompeii
Pompeii
The city of Pompeii is a partially buried Roman town-city near modern Naples in the Italian region of Campania, in the territory of the comune of Pompei. Along with Herculaneum, Pompeii was destroyed and completely buried during a long catastrophic eruption of the volcano Mount Vesuvius spanning...
.
The source of this article is wikipedia, the free encyclopedia.  The text of this article is licensed under the GFDL.