Encyclopedia
The British Antarctic Survey (BAS) is the United Kingdom
United Kingdom
The United Kingdom of Great Britain and Northern IrelandIn the United Kingdom and Dependencies, other languages have been officially recognised as legitimate autochthonous languages under the European Charter for Regional or Minority Languages...
's national Antarctic
Antarctic
The Antarctic is the region around the Earth's South Pole, opposite the Arctic region around the North Pole. The Antarctic comprises the continent of Antarctica and the ice shelves, waters and island territories in the Southern Ocean situated south of the Antarctic Convergence...
operation and has an active role in Antarctic affairs. BAS is part of the Natural Environment Research Council
Natural Environment Research Council
The Natural Environment Research Council is a British research council that supports research, training and knowledge transfer activities in the environmental sciences.-History:...
(NERC) and has over 400 staff. It operates five research station
Research station
A research station is a station built for the purpose of conducting scientific research. Research station sites might include outer space and oceans. Many nations have research stations in Antarctica; Showa Station, Halley and Troll are examples...
s, two ships and five aircraft in and around Antarctica. BAS addresses key global and regional issues. This involves joint research projects with over 40 UK universities and more than 120 national and international collaborations.

Operation Tabarin
Operation Tabarin
During World War II, Operation Tabarin was a small British military expedition launched from the UK in 1943 to the Antarctic to establish permanently occupied bases.-Reasons for the expedition:There were several reasons for Tabarin...
was a small British expedition in 1943 to establish permanently occupied bases in the Antarctic. It was a joint undertaking by the Admiralty
Admiralty
The Admiralty was formerly the authority in the Kingdom of England, and later in the United Kingdom, responsible for the command of the Royal Navy...
and the Colonial Office
Secretary of State for the Colonies
The Secretary of State for the Colonies or Colonial Secretary was the British Cabinet minister in charge of managing the United Kingdom's various colonial dependencies....
. At the end of the war it was renamed the Falkland Islands Dependencies
Falkland Islands Dependencies
Falkland Islands Dependencies was the constitutional arrangement for administering the British territories in Sub-Antarctica and Antarctica from 1843 until 1985.-Background:...
Survey (FIDS) and full control passed to the Colonial Office. At this time there were four stations, three occupied and one unoccupied. By the time FIDS was renamed British Antarctic Survey in 1962, 19 stations and three refuges had been established.

The Antarctic explorer Sir Vivian Fuchs
Vivian Fuchs
Sir Vivian Ernest Fuchs FRS was an English explorer whose expeditionary team completed the first overland crossing of Antarctica in 1958.- Biography :...
was Director of BAS from 1958 to 1973.


Of these bases, only Rothera and Halley are manned throughout the year. The remaining bases are manned only during the Antarctic summer.


Both South Georgia bases are manned throughout the year.

The headquarters of the BAS are in the United Kingdom, in the university city of Cambridge
Cambridge
The city of Cambridge is a university town and the administrative centre of the county of Cambridgeshire, England. It lies in East Anglia about north of London. Cambridge is at the heart of the high-technology centre known as Silicon Fen – a play on Silicon Valley and the fens surrounding the...
, on Madingley Road
Madingley Road
Madingley Road is a major arterial road linking central Cambridge, England with Junction 13 of the M11 motorway. It passes by West Cambridge, a major new site where some University of Cambridge departments are being relocated....
. This facility provides offices, laboratories and workshops to support the scientific and logistic activities in the Antarctic.

The BAS also operates the Ny-Ålesund Research Station on behalf of the NERC. This is an Arctic
Arctic
The Arctic is a region located at the northern-most part of the Earth. The Arctic consists of the Arctic Ocean and parts of Canada, Russia, Greenland, the United States, Norway, Sweden, Finland, and Iceland. The Arctic region consists of a vast, ice-covered ocean, surrounded by treeless permafrost...
research base located at Ny-Ålesund
Ny-Ålesund
Ny-Ålesund is one of the four permanent settlements on the island of Spitsbergen in the Svalbard archipelago. It is located on the Brøgger peninsula at Kongsfjorden...
on the Norwegian
Norway
Norway , officially the Kingdom of Norway, is a Nordic unitary constitutional monarchy whose territory comprises the western portion of the Scandinavian Peninsula, Jan Mayen, and the Arctic archipelago of Svalbard and Bouvet Island. Norway has a total area of and a population of about 4.9 million...
island of Spitsbergen
Spitsbergen
Spitsbergen is the largest and only permanently populated island of the Svalbard archipelago in Norway. Constituting the western-most bulk of the archipelago, it borders the Arctic Ocean, the Norwegian Sea and the Greenland Sea...
. 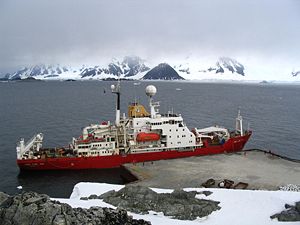 BAS operates two ships in support of its Antarctic research program. Whilst both vessels have research and supply capabilities, the is primarily an oceanographic research ship, whilst the is primarily a logistics ship used for the resupply of scientific stations. James Clark Ross replaced in 1991 and the Ernest Shackleton was the successor to in 1999.

Both vessels depart from the United Kingdom in September or October of each year, and return to the United Kingdom in the following May or June. Both vessels undergo refit and drydock during the Antarctic winter, but are also used elsewhere during this period. The James Clark Ross often undertakes scientific research on behalf of other organisations in the Arctic
Arctic
The Arctic is a region located at the northern-most part of the Earth. The Arctic consists of the Arctic Ocean and parts of Canada, Russia, Greenland, the United States, Norway, Sweden, Finland, and Iceland. The Arctic region consists of a vast, ice-covered ocean, surrounded by treeless permafrost...
, whilst Ernest Shackleton is chartered into commercial survey work.

The two civilian ships operated by the BAS are complemented by the capabilities of the Royal Navy
Royal Navy
The Royal Navy is the naval warfare service branch of the British Armed Forces. Founded in the 16th century, it is the oldest service branch and is known as the Senior Service...
's ice patrol vessel that operates in the same waters. Until 2008 this was HMS Endurance
HMS Endurance (A171)
MV Polar Circle was built in Norway in 1990, chartered by the Royal Navy as HMS Polar Circle, and finally purchased as HMS Endurance. She is a former Antarctic ice patrol ship, and is a class 1A1 icebreaker...
, a Class 1A1 icebreaker
Icebreaker
An icebreaker is a special-purpose ship or boat designed to move and navigate through ice-covered waters. Although the term usually refers to ice-breaking ships, it may also refer to smaller vessels .For a ship to be considered an icebreaker, it requires three traits most...
. Endurance's has two Lynx helicopters
Westland Lynx
The Westland Lynx is a British multi-purpose military helicopter designed and built by Westland Helicopters at its factory in Yeovil. Originally intended as a utility craft for both civil and naval usage, military interest led to the development of both battlefield and naval variants...
enable BAS staff to get to remote field sites that BAS aircraft cannot access. However, a catastrophic accident left Endurance badly damaged, with a replacement only being procured in 2011. This ship, HMS Protector, first deployed to the Antarctic in November 2011.

The larger Dash 7 undertakes regular shuttle flights between either Port Stanley Airport
Port Stanley Airport
Port Stanley Airport is a STOLport in the Falkland Islands, two miles outside the capital, Stanley. The airport is the only civilian airport in the islands with a paved runway...
on the Falkland Islands
Falkland Islands
The Falkland Islands are an archipelago in the South Atlantic Ocean, located about from the coast of mainland South America. The archipelago consists of East Falkland, West Falkland and 776 lesser islands. The capital, Stanley, is on East Falkland...
, or Punta Arenas
Punta Arenas, Chile
Punta Arenas is a commune and the capital city of Chile's southernmost region, Magallanes and Antartica Chilena. The city was officially renamed Magallanes in 1927, but in 1938 it was changed back to Punta Arenas...
in Chile
Chile
Chile ,officially the Republic of Chile , is a country in South America occupying a long, narrow coastal strip between the Andes mountains to the east and the Pacific Ocean to the west. It borders Peru to the north, Bolivia to the northeast, Argentina to the east, and the Drake Passage in the far...
, and Rothera. It also operates to and from the ice runway at the Sky Blu base. The smaller Twin Otters are equipped with skis for landing on snow and ice in remote areas, and operate out of the bases at Rothera, Fossil Bluff, Halley and Sky Blu. 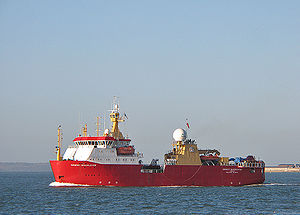 In January 2008, a team of British Antarctic Survey scientists, led by Hugh Corr and David Vaughan, reported that 2,200 years ago a volcano
Volcano
2. Bedrock3. Conduit 4. Base5. Sill6. Dike7. Layers of ash emitted by the volcano8. Flank| 9. Layers of lava emitted by the volcano10. Throat11. Parasitic cone12. Lava flow13. Vent14. Crater15...
erupted under Antarctica's ice sheet (based on airborne survey
Aerial survey
Aerial survey is a geomatics method of collecting information by using aerial photography, LiDAR or from remote sensing imagery using other bands of the electromagnetic spectrum, such as infrared, gamma, or ultraviolet. It can also refer to the chart or map made by analysing a region from the air...
with radar images). The biggest eruption in the last 10,000 years, the volcanic ash was found deposited on the ice surface under the Hudson Mountains
Hudson Mountains
The Hudson Mountains is a group of parasitic cones forming nunataks just above the Antarctic ice sheet in west Ellsworth Land. They lie just east of Cranton Bay and Pine Island Bay at the eastern extremity of Amundsen Sea, and are bounded on the north by Cosgrove Ice Shelf and on the south by Pine...
, close to Pine Island Glacier
Pine Island Glacier
- Ice sheet drainage :The Antarctic ice sheet is the largest mass of ice on earth, containing a volume of water equivalent to of global sea level. The ice sheet forms from snow which falls onto the continent and compacts under its own weight. The ice then moves under its own weight toward the...
.