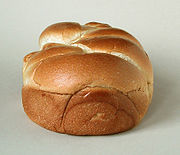 Brioche is a highly enriched
Enriched flour
Enriched flour is flour with specific nutrients returned to it that have been lost while it was prepared. These restored nutrients include iron and B vitamins . Calcium may also be supplemented. The purpose of enriching flour is to replenish the nutrients in the flour to match the nutritional...
French
French cuisine
French cuisine is a style of food preparation originating from France that has developed from centuries of social change. In the Middle Ages, Guillaume Tirel , a court chef, authored Le Viandier, one of the earliest recipe collections of Medieval France...
pastry
Pastry
Pastry is the name given to various kinds of baked products made from ingredients such as flour, sugar, milk, butter, shortening, baking powder and/or eggs. Small cakes, tarts and other sweet baked products are called "pastries."...
, whose high egg
Egg (food)
Eggs are laid by females of many different species, including birds, reptiles, amphibians, and fish, and have probably been eaten by mankind for millennia. Bird and reptile eggs consist of a protective eggshell, albumen , and vitellus , contained within various thin membranes...
and butter
Butter
Butter is a dairy product made by churning fresh or fermented cream or milk. It is generally used as a spread and a condiment, as well as in cooking applications, such as baking, sauce making, and pan frying...
content give it a rich and tender crumb. It is "light and slightly puffy, more or less fine, according to the proportion of butter and eggs" It has a dark, golden, and flaky crust, frequently accentuated by an egg wash applied after proofing
Proofing (baking technique)
Proofing , as the term is used by professional bakers, is the final dough-rise step before baking, and refers to a specific rest period within the more generalized process known as fermentation...
.

Brioche is considered a Viennoiserie
Viennoiserie
Viennoiseries are baked goods made from a yeast-leavened dough in a manner similar to bread, or from puff pastry, but with added ingredients giving them a richer, sweeter character, approaching that of pastry. The dough is often laminated...
. It is made in the same basic way as bread, but has the richer aspect of a pastry because of the extra addition of eggs, butter, liquid (milk, water, cream, and, sometimes, brandy) and occasionally a bit of sugar. Brioche, along with pain au lait and pain aux raisins
Pain aux raisins
Pain aux raisins, known in Australia as an escargot, is a member of the pâtisserie viennoise family of baked foods.In France, it is typically a variant on the croissant or pain au chocolat, made with a leavened butter pastry, with raisins added, shaped in a spiral with a crème pâtissière filling...
— which are commonly eaten at breakfast or as a snack — form a leavened subgroup of Viennoiserie. Brioche is often cooked with fruit or chocolate chips and served as a pastry or as the basis of a dessert with many local variations in added ingredients, fillings or toppings.

"Brioche is eaten with dessert or tea, but also has numerous uses in cuisine. Common brioche dough is suitable for coulibiac
Coulibiac
A coulibiac is a loaf of fish, meat, or vegetables, baked in a pastry shell. The traditional Russian version is made with salmon or sturgeon, hard-boiled eggs, mushrooms, and dill....
and fillet of beef en croute. Brioche mousseline surrounds foie gras
Foie gras
Foie gras ; French for "fat liver") is a food product made of the liver of a duck or goose that has been specially fattened. This fattening is typically achieved through gavage corn, according to French law, though outside of France it is occasionally produced using natural feeding...
, sausage, cervelat
Cervelat
Cervelat, also cervelas, servelat or zervelat, is a kind of cooked sausage produced mainly in Switzerland, Alsace and in parts of Germany...
lyonnais; . . . individual brioches serve as containers for various chopped and sauced stuffings, savoury or sweet, as warm appetizers or intermediate courses."

Brioche à tête or parisienne is perhaps the most classically recognized form: it is formed and baked in a fluted round, flared tin; a large ball of dough is placed on the bottom and topped with a smaller ball of dough to form the head (tête).
Brioche Nanterre is a loaf of brioche made in a standard loaf pan. Instead of shaping two pieces of dough and baking them together, two rows of small pieces of dough are placed in the pan. Loaves are then proofed (allowed to rise) in the pan, fusing the pieces together. During the baking process the balls of dough rise further and form an attractive pattern.

Brioche can also be made in a pan without being rolled into balls to make an ordinary loaf.

The normal method is to make the dough, let it rise to double its volume at room temperature and then punch it down and let it rise again in the refrigerator for varying periods (according to the recipe), retarding the dough to develop the flavor. Refrigeration also stiffens the dough, which still rises, albeit slowly, making it easier to form. The dough is then shaped, placed in containers for the final rise (proof), and the tops are generally brushed with an egg wash just before baking to give the top a burnished sheen during baking, and then baked at 230 °C (446 °F) until the crust caramelizes (Maillard reaction
Maillard reaction
The Maillard reaction is a form of nonenzymatic browning similar to caramelization. It results from a chemical reaction between an amino acid and a reducing sugar, usually requiring heat....
) and the interior is done (reaches at least 90 °C). The first rise time for small rolls is 1 to 1½ hours, for larger brioche the time is lengthened until the loaves double.

The first recorded use of the word in French dates from 1404. It is attested in 1611 in Cotgrave
Cotgrave
-History:Cotgrave is a town in the borough of Rushcliffe, in Nottinghamshire, England, lying south east of Nottingham. With a relatively small population and an ancient heart that has largely escaped development Cotgrave has a village atmosphere...
's A Dictionarie of the French and English Tongues, where it is described as "a rowle, or bunne, of spiced bread" and its origin given as Norman. A similar type of bread, called "tsoureki" (τσουρέκι), is also traditionally baked in Greece during Christmas.

In France it developed as "a sort of bread improved since antiquity by generations of bakers, then of pastry-makers . . . with some butter, some eggs, sugar coming later . . . it developed from the blessed bread [pain bénit] of the church which gradually became of better quality, more and more costly, less and less bread; until becoming savoury brioche". In the 17th century "pâté à tarte briochée", "a pain à brioche pauvre . . . [using only] 3 eggs and 250 grams of butter for 1 kilogram of flour" was introduced. But for the wealthy "from the time of Louis XIV onwards . . . Butter, in widespread use at least in the northern half of France, was the secret of making brioches" In the 18th century "blessed bread . . . was more and more often replaced by brioche . . . from the middle of the century the brioches, made up to then with sourdough, were equally made with [brewer's] yeast. Those from Gisors and Gournay, great butter markets, were the most highly regarded." "In Gisors, on market days, they produce up to 250 or 300 kg of brioches. The dough is made the evening before (1kg of farine, a quarter of which for the starter, 10g of yeast, 7 or 8 eggs; one mixes this together with the starter and 800g of butter, breaking up the dough, which 'uses up the butter'. The dough is kept in a terrine, and one puts it in a mold just at the moment of baking. Thus prepared, the brioche remains light, keeps well, maintains the flavour of butter, without the stench of the starter. The terms pain bénit" and "brioche" were sometimes used together or virtually interchangeably; so, for example, the oldest complete recipe that survives is entitled : "CHAPITRE II. Paint bénit, & brioches." It begins with a lighter, cheaper version of blessed bread, calling for "a pound of fresh butter and a soft cheese [but no eggs!] for a pail of flour; and goes on to describe "the more delicate that we call Cousin", which uses 3 pounds of butter, 2 cheeses, and a royal pint of eggs for the same amount of flour, as well "some good milk" if "the dough is too firm"
So brioche of varying degrees of richness from the rich man's with a flour to butter ratio of 3:2 to the cheaper pain briochée with a ratio of 4:1 existed at the same time.

Jean-Jacques Rousseau
Jean-Jacques Rousseau
Jean-Jacques Rousseau was a Genevan philosopher, writer, and composer of 18th-century Romanticism. His political philosophy influenced the French Revolution as well as the overall development of modern political, sociological and educational thought.His novel Émile: or, On Education is a treatise...
, in his autobiography Confessions
Confessions (Jean-Jacques Rousseau)
Confessions is an autobiographical book by Jean-Jacques Rousseau. In modern times, it is often published with the title The Confessions of Jean-Jacques Rousseau in order to distinguish it from St. Augustine of Hippo's Confessions...
(published posthumously in 1782, but completed in 1769), relates that "a great princess
Princess
Princess is the feminine form of prince . Most often, the term has been used for the consort of a prince, or his daughters....
" is said to have advised, with regard to peasants who had no bread, "Qu'ils mangent de la brioche", commonly inaccurately translated as "Let them eat cake
Let Them Eat Cake
"Let them eat cake" is the traditional translation to English of the French phrase "Qu'ils mangent de la brioche", supposedly spoken by "a great princess" upon learning that the peasants had no bread...
". This saying is commonly mis-attributed to Queen Marie-Antoinette, wife of Louis XVI
Louis XVI of France
Louis XVI was a Bourbon monarch who ruled as King of France and Navarre until 1791, and then as King of the French from 1791 to 1792, before being executed in 1793....
. In the contemporaneous "Encyclopédie" it says: "the taste for luxury and onerous magnificence of much of the world, having slipped into religious practice, the usage was introduced in large cities of giving in place of bread, some more or less delicate cake . . . one would not believe what it costs the nation every year for this article alone. We know that there are more than 40,000 parishes in the kingdom where they distribute blessed bread"

Although there has been much debate about the etymology of the word and, thus, the recipe's origins, it is now widely accepted that it is derived from the Old French verb "brier", 'a Norman dialectical form of "broyer", to work the dough with a "broye" or "brie" ( a sort of wooden roller for kneading); the suffix "-oche" is a generic deverbal suffix. "Pain brié
Pain brié
Pain brié is a traditional Normandy bread. Its name comes from the pounding of the dough, as "brie" is derived from the Old Norman verb brier, meaning "to pound"...
" is a Norman bread whose dense dough was formerly worked with this instrument'. The root—bhreg—is of Germanic origin.
The source of this article is wikipedia, the free encyclopedia.  The text of this article is licensed under the GFDL.