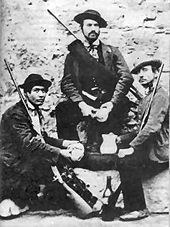 Brigandage in the Two Sicilies had existed in some form since ancient times, however its origins as outlaw
Outlaw
In historical legal systems, an outlaw is declared as outside the protection of the law. In pre-modern societies, this takes the burden of active prosecution of a criminal from the authorities. Instead, the criminal is withdrawn all legal protection, so that anyone is legally empowered to persecute...
s targeting random travellers would evolve vastly later on in the form of the political resistance movement
Resistance movement
A resistance movement is a group or collection of individual groups, dedicated to opposing an invader in an occupied country or the government of a sovereign state. It may seek to achieve its objects through either the use of nonviolent resistance or the use of armed force...
form of brigandage
Brigandage
Brigandage refers to the life and practice of brigands: highway robbery and plunder, and a brigand is a person who usually lives in a gang and lives by pillage and robbery....
in the Two Sicilies. During the time of the Napoleonic conquest of the Kingdom of Naples
Kingdom of Naples
The Kingdom of Naples, comprising the southern part of the Italian peninsula, was the remainder of the old Kingdom of Sicily after secession of the island of Sicily as a result of the Sicilian Vespers rebellion of 1282. Known to contemporaries as the Kingdom of Sicily, it is dubbed Kingdom of...
, the first signs of political resistance brigandage came to public light, as the Bourbon
House of Bourbon
The House of Bourbon is a European royal house, a branch of the Capetian dynasty . Bourbon kings first ruled Navarre and France in the 16th century. By the 18th century, members of the Bourbon dynasty also held thrones in Spain, Naples, Sicily, and Parma...
loyalists of the country refused to accept the new Bonapartist rulers and actively fought against them until the Bourbon monarchy had been reinstated.

After conquest of southern Italy
Italian unification
Italian unification was the political and social movement that agglomerated different states of the Italian peninsula into the single state of Italy in the 19th century...
by the Kingdom of Sardinia
Kingdom of Sardinia
The Kingdom of Sardinia consisted of the island of Sardinia first as a part of the Crown of Aragon and subsequently the Spanish Empire , and second as a part of the composite state of the House of Savoy . Its capital was originally Cagliari, in the south of the island, and later Turin, on the...
in 1861, the most famous and well known form of brigandage in the area emerged. Once the Two Sicilies had been taken, social unrest, especially among the lower classes occurred due to poor conditions and the fact that the Risorgimento benefited in the "Mezzogiorno" of Italy only the bourgeoisie
Bourgeoisie
In sociology and political science, bourgeoisie describes a range of groups across history. In the Western world, between the late 18th century and the present day, the bourgeoisie is a social class "characterized by their ownership of capital and their related culture." A member of the...
vast-land owning classes. Many turned to brigandage in the mountain
Mountain
Image:Himalaya_annotated.jpg|thumb|right|The Himalayan mountain range with Mount Everestrect 58 14 160 49 Chomo Lonzorect 200 28 335 52 Makalurect 378 24 566 45 Mount Everestrect 188 581 920 656 Tibetan Plateaurect 250 406 340 427 Rong River...
s and hills of Basilicata
Basilicata
Basilicata , also known as Lucania, is a region in the south of Italy, bordering on Campania to the west, Apulia to the north and east, and Calabria to the south, having one short southwestern coastline on the Tyrrhenian Sea between Campania in the northwest and Calabria in the southwest, and a...
, Campania
Campania
Campania is a region in southern Italy. The region has a population of around 5.8 million people, making it the second-most-populous region of Italy; its total area of 13,590 km² makes it the most densely populated region in the country...
, Calabria
Calabria
Calabria , in antiquity known as Bruttium, is a region in southern Italy, south of Naples, located at the "toe" of the Italian Peninsula. The capital city of Calabria is Catanzaro....
and Abruzzo
Abruzzo
Abruzzo is a region in Italy, its western border lying less than due east of Rome. Abruzzo borders the region of Marche to the north, Lazio to the west and south-west, Molise to the south-east, and the Adriatic Sea to the east...
to continue the fight against the northern invaders. Amongst the brigands were a mixture of people, with different working backgrounds and motives, but the same desire to defeat the common enemy; the brigands included people who the Italian government considered criminals, many former soldiers and loyalists of the Bourbon army, but also nobles
Nobility of Italy
The Nobility of Italy consisted of individuals and their families of Italy recognized by sovereigns, such as the Holy Roman Emperor, the Holy See, Kings of Italy or certain other Italian kings and sovereigns as members of a class of persons officially enjoying hereditary privileges which...
, poverty
Poverty
Poverty is the lack of a certain amount of material possessions or money. Absolute poverty or destitution is inability to afford basic human needs, which commonly includes clean and fresh water, nutrition, health care, education, clothing and shelter. About 1.7 billion people are estimated to live...
stricken farmers who had fled due to extortionate Italian taxes placed on them and peasants who wanted land reforms, both men and women took up arms.

They launched attacks against the Italian authorities (who were regarded as foreigners) and the land owning upper-classes, coming to be viewed by many of the common people as Robin Hood
Robin Hood
Robin Hood was a heroic outlaw in English folklore. A highly skilled archer and swordsman, he is known for "robbing from the rich and giving to the poor", assisted by a group of fellow outlaws known as his "Merry Men". Traditionally, Robin Hood and his men are depicted wearing Lincoln green clothes....
like figures, some of them gained celebrity
Celebrity
A celebrity, also referred to as a celeb in popular culture, is a person who has a prominent profile and commands a great degree of public fascination and influence in day-to-day media...
in the area via the spreading of their stories. Especially after passing the Legge Pica legislation
Legislation
Legislation is law which has been promulgated by a legislature or other governing body, or the process of making it...
in 1863, an extremely strong handed repression of the brigands by the Italian authorities picked up; it also allowed the execution of relatives and those suspected with collaborating or helping a brigand. Villages such as Pontelandolfo
Pontelandolfo
Pontelandolfo is an Italian town and comune of 28.91 square kilometers, in the Sannio Hills in the province of Benevento halfway between Naples and Campobasso, with around 3,000 inhabitants.-History:...
and Casalduni
Casalduni
Casalduni is a comune in the Province of Benevento in the Italian region Campania, located about 60 km northeast of Naples and about 15 km northwest of Benevento, on the slopes of Monte Cicco on the right of the Tammaro river....
in the Province of Benevento
Province of Benevento
The Province of Benevento is a province in the Campania region of Italy. Its capital is the city of Benevento.It has an area of 2,071 km², and a total population of 289,455...
are famous for the killing of civilians by the so-called "Piedmontese
Piedmont
Piedmont is one of the 20 regions of Italy. It has an area of 25,402 square kilometres and a population of about 4.4 million. The capital of Piedmont is Turin. The main local language is Piedmontese. Occitan is also spoken by a minority in the Occitan Valleys situated in the Provinces of...
" authorities. In total several thousand southerners were arrested and executed, while many more were deported or fled the country.
The source of this article is wikipedia, the free encyclopedia.  The text of this article is licensed under the GFDL.