Encyclopedia
Brie-Comte-Robert is a commune
Communes of France
The commune is the lowest level of administrative division in the French Republic. French communes are roughly equivalent to incorporated municipalities or villages in the United States or Gemeinden in Germany...
in the Seine-et-Marne
Seine-et-Marne
Seine-et-Marne is a French department, named after the Seine and Marne rivers, and located in the Île-de-France region.- History:Seine-et-Marne is one of the original 83 departments, created on March 4, 1790 during the French Revolution in application of the law of December 22, 1789...
department in the Île-de-France
Île-de-France (région)
Île-de-France is the wealthiest and most populated of the twenty-two administrative regions of France, composed mostly of the Paris metropolitan area....
region
Régions of France
France is divided into 27 administrative regions , 22 of which are in Metropolitan France, and five of which are overseas. Corsica is a territorial collectivity , but is considered a region in mainstream usage, and is even shown as such on the INSEE website...
in north-central France
France
The French Republic , The French Republic , The French Republic , (commonly known as France , is a unitary semi-presidential republic in Western Europe with several overseas territories and islands located on other continents and in the Indian, Pacific, and Atlantic oceans. Metropolitan France...
.

Brie-Comte-Robert is on the edge of the plain of Brie and was formerly the capital of the Brie française.

"Brie" comes from the Gaulish
Gaulish language
The Gaulish language is an extinct Celtic language that was spoken by the Gauls, a people who inhabited the region known as Gaul from the Iron Age through the Roman period...
briga, meaning "plateau".
The "Comte Robert" was Robert I of Dreux
Robert I of Dreux
Robert I of Dreux, nicknamed the Great , was the fifth son of Louis VI of France and Adélaide de Maurienne. Through his mother he was related to the Carolingians and to the Marquess William V of Montferrat.In 1137 he received the County of Dreux as an appanage from his father...
who owned the town and was a brother of the King Louis VII
Louis VII of France
Louis VII was King of France, the son and successor of Louis VI . He ruled from 1137 until his death. He was a member of the House of Capet. His reign was dominated by feudal struggles , and saw the beginning of the long rivalry between France and England...
.

The inhabitants are called Briards. 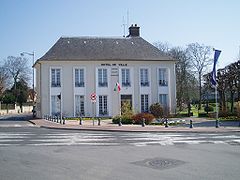