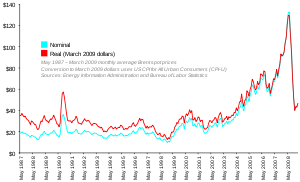 Brent Crude is the biggest of the many major classifications of crude oil
Petroleum
Petroleum or crude oil is a naturally occurring, flammable liquid consisting of a complex mixture of hydrocarbons of various molecular weights and other liquid organic compounds, that are found in geologic formations beneath the Earth's surface. Petroleum is recovered mostly through oil drilling...
consisting of Brent Crude, Brent Sweet
Sweet crude oil
Sweet crude oil is a type of petroleum. Petroleum is considered "sweet" if it contains less than 0.5% sulfur, compared to a higher level of sulfur in sour crude oil. Sweet crude oil contains small amounts of hydrogen sulfide and carbon dioxide. High quality, low sulfur crude oil is commonly used...
Light Crude
Light crude oil
Light crude oil is liquid petroleum that has a low density and flows freely at room temperature. It has a low viscosity, low specific gravity and high API gravity due to the presence of a high proportion of light hydrocarbon fractions. It generally has a low wax content...
, Oseberg
Oseberg oil field
Oseberg is an offshore oil field with a gas cap in the North Sea located northwest of the city of Bergen on the southwestern coast of Norway....
, Ekofisk
Ekofisk oil field
Ekofisk is an oil field in the Norwegian sector of the North Sea about southwest of Stavanger. Discovered in 1969, it remains one of the most important oil fields in the North Sea. Production began in 1971 after the construction of a series of off-shore platforms by Phillips Petroleum Company...
, and Forties (BFOE). Brent Crude is sourced from the North Sea
North Sea
In the southwest, beyond the Straits of Dover, the North Sea becomes the English Channel connecting to the Atlantic Ocean. In the east, it connects to the Baltic Sea via the Skagerrak and Kattegat, narrow straits that separate Denmark from Norway and Sweden respectively...
. The Brent Crude oil marker is also known as Brent Blend, London Brent and Brent petroleum. It is used to price two thirds of the world's internationally traded crude oil supplies.

The name "Brent" comes from the naming policy of Shell UK Exploration and Production, operating on behalf of ExxonMobil
ExxonMobil
Exxon Mobil Corporation or ExxonMobil, is an American multinational oil and gas corporation. It is a direct descendant of John D. Rockefeller's Standard Oil company, and was formed on November 30, 1999, by the merger of Exxon and Mobil. Its headquarters are in Irving, Texas...
and Royal Dutch Shell
Royal Dutch Shell
Royal Dutch Shell plc , commonly known as Shell, is a global oil and gas company headquartered in The Hague, Netherlands and with its registered office in London, United Kingdom. It is the fifth-largest company in the world according to a composite measure by Forbes magazine and one of the six...
, which originally named all of its fields after birds (in this case the Brent Goose
Brent Goose
The Brant or Brent Goose, Branta bernicla, is a species of goose of the genus Branta. The Black Brant is an American subspecies. The specific descriptor bernicla is from the same source as "barnacle" in Barnacle Goose, which looks similar but is not a close relation.-Appearance:The Brant Goose is...
).

Petroleum
Petroleum
Petroleum or crude oil is a naturally occurring, flammable liquid consisting of a complex mixture of hydrocarbons of various molecular weights and other liquid organic compounds, that are found in geologic formations beneath the Earth's surface. Petroleum is recovered mostly through oil drilling...
production from Europe
Europe
Europe is, by convention, one of the world's seven continents. Comprising the westernmost peninsula of Eurasia, Europe is generally 'divided' from Asia to its east by the watershed divides of the Ural and Caucasus Mountains, the Ural River, the Caspian and Black Seas, and the waterways connecting...
, Africa
Africa
Africa is the world's second largest and second most populous continent, after Asia. At about 30.2 million km² including adjacent islands, it covers 6% of the Earth's total surface area and 20.4% of the total land area...
and the Middle East
Middle East
The Middle East is a region that encompasses Western Asia and Northern Africa. It is often used as a synonym for Near East, in opposition to Far East...
flowing West tends to be priced relative to this oil, i.e. it forms a benchmark. However, large parts of Europe now receive their oil from Russia
Russia
Russia or , officially known as both Russia and the Russian Federation , is a country in northern Eurasia. It is a federal semi-presidential republic, comprising 83 federal subjects...
.

Brent blend is a light crude oil
Light crude oil
Light crude oil is liquid petroleum that has a low density and flows freely at room temperature. It has a low viscosity, low specific gravity and high API gravity due to the presence of a high proportion of light hydrocarbon fractions. It generally has a low wax content...
, though not as light as WTI
West Texas Intermediate
West Texas Intermediate , also known as Texas light sweet, is a grade of crude oil used as a benchmark in oil pricing. It is a light and sweet crude oil...
. It contains approximately 0.37% of sulphur, classifying it as sweet crude
Sweet Crude
Sweet Crude is a documentary film by Sandy Cioffi about Nigeria's oil-rich Niger Delta. The film premiered in April 2009 at the Full Frame Documentary Film Festival and has since screened at 30 film festivals around the world and has won numerous awards....
, yet again not as sweet as WTI. Brent is suitable for production of petrol and middle distillates. It is typically refined in Northwest Europe.

The symbol for Brent crude is LCO. It was originally traded on the open-outcry International Petroleum Exchange
International Petroleum Exchange
The International Petroleum Exchange, based in London, was one of the world's largest energy futures and options exchanges. Its flagship commodity, Brent Crude was a world benchmark for oil prices, but the exchange also handled futures contracts and options on fuel oil, natural gas, electricity ,...
in London, but since 2005 has been traded on the electronic IntercontinentalExchange
IntercontinentalExchange
IntercontinentalExchange, Inc., known as ICE, is an American financial company that operates Internet-based marketplaces which trade futures and over-the-counter energy and commodity contracts as well as derivative financial products...
, known as ICE. One contract equals 1000 barrels (158,987 l). Contracts are quoted in U.S. dollars
United States dollar
The United States dollar , also referred to as the American dollar, is the official currency of the United States of America. It is divided into 100 smaller units called cents or pennies....
. Each tick lost or gained equals $10.

Prior to September 2010, there existed a typical price difference per barrel of between +/-3 USD/bbl compared to WTI and OPEC Basket, however since the autumn of 2010 there has been a significant divergence in price compared to WTI, reaching over $11 a barrel by the end of February 2011 (WTI: 104 USD/bbl, LCO: 116 USD/bbl). Many reasons have been given for this widening divergence ranging from a speculative change away from WTI trading (although not supported by trading volumes), Dollar currency movements, regional demand variations, and even politics. The depletion of the North Sea oil
North Sea oil
North Sea oil is a mixture of hydrocarbons, comprising liquid oil and natural gas, produced from oil reservoirs beneath the North Sea.In the oil industry, the term "North Sea" often includes areas such as the Norwegian Sea and the area known as "West of Shetland", "the Atlantic Frontier" or "the...
fields is one explanation for the divergence in forward prices. In February 2011 the divergence reached $16 during a supply glut, record stockpiles, at Cushing, Oklahoma and is currently (August 2011) above $23. Historically the different price spreads are based on physical variations in supply and demand (short term).