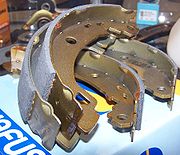 Brake linings are the consumable surfaces in brake
Brake
A brake is a mechanical device which inhibits motion. Its opposite component is a clutch. The rest of this article is dedicated to various types of vehicular brakes....
systems, such as drum brake
Drum brake
A drum brake is a brake in which the friction is caused by a set of shoes or pads that press against a rotating drum-shaped part called a brake drum....
s and disc brake
Disc brake
The disc brake or disk brake is a device for slowing or stopping the rotation of a wheel while it is in motion.A brake disc is usually made of cast iron, but may in some cases be made of composites such as reinforced carbon–carbon or ceramic matrix composites. This is connected to the wheel and/or...
s used in transport vehicles.

Brake linings were invented by Bertha Benz
Bertha Benz
Bertha Benz was born on 3 May 1849 in Pforzheim, Germany. She married inventor Karl Benz on 20 July 1872, and died 5 May 1944 in Ladenburg...
(the wife of Karl Benz
Karl Benz
Karl Friedrich Benz, was a German engine designer and car engineer, generally regarded as the inventor of the gasoline-powered car, and together with Bertha Benz pioneering founder of the automobile manufacturer Mercedes-Benz...
who invented the first patented automobile) during her historic first long distance car trip
Road trip
A road trip is any journey taken on roads, regardless of stops en route. Typically, road trips are long distances traveled by automobile.-Pre-automobile road trips:...
in the world in August 1888.

Brake linings are composed of a relatively soft but tough and heat-resistant material with a high coefficient of dynamic friction
Friction
Friction is the force resisting the relative motion of solid surfaces, fluid layers, and/or material elements sliding against each other. There are several types of friction:...
(and ideally an identical coefficient of static friction) typically mounted to a solid metal backing using high-temperature adhesives or rivets. The complete assembly (including lining and backing) is then often called a brake pad or brake shoe
Brake shoe
A brake shoe is the part of a braking system which carries the brake lining in the drum brakes used on automobiles, or the brake block in train brakes and bicycle brakes.-Automobile drum brake:...
. The dynamic friction coefficient "µ" for most standard brake pads is usually in the range of 0.35 to 0.42. This means that a force of 1000 Newtons (or pounds) on the pad will give a resulting brake force close to 400 Newtons (or pounds). There are some racing pads that have a very high µ of 0.55 to 0.62 with excellent high temperature behaviour. These pads have high iron content and will usually outperform any other pad used with iron discs. Unfortunately nothing comes for free, and these high µ pads wear fast and also wear down the discs at a rather fast rate. However they are a very cost effective alternative to more exotic/expensive materials. 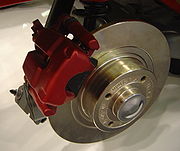 Using a typical bicycle brake as an example, the backing would be the metal shell which provides mechanical support, and the lining would be the rubbery portion which contacts the rims when the brakes are applied. In most modern vehicular applications the system is conceptually identical, except the rims would be replaced with solid steel (or sometimes exotic metal) disc
Disc brake
The disc brake or disk brake is a device for slowing or stopping the rotation of a wheel while it is in motion.A brake disc is usually made of cast iron, but may in some cases be made of composites such as reinforced carbon–carbon or ceramic matrix composites. This is connected to the wheel and/or...
. Furthermore, a metal tang is usually incorporated into the pad assembly. The tang contacts the rotors when the linings are worn out, causing an annoying noise designed to alert the motorist that brake servicing is required.

Since the lining is the portion of the braking system which converts the vehicle's kinetic energy
Kinetic energy
The kinetic energy of an object is the energy which it possesses due to its motion.It is defined as the work needed to accelerate a body of a given mass from rest to its stated velocity. Having gained this energy during its acceleration, the body maintains this kinetic energy unless its speed changes...
into heat, the lining must be capable of surviving high temperatures without excessive wear (leading to frequent replacement) or outgassing
Outgassing
Outgassing is the release of a gas that was dissolved, trapped, frozen or absorbed in some material. As an example, research has shown how the concentration of carbon dioxide in the Earth's atmosphere has sometimes been linked to ocean outgassing...
(which causes brake fade
Brake fade
Vehicle braking system fade, or brake fade, is the reduction in stopping power that can occur after repeated or sustained application of the brakes, especially in high load or high speed conditions...
, a decrease in the stopping power of the brake).

When the lining is worn out, the backing or rivets will contact the rotors or drums during braking, often causing damage requiring remachining or replacement of the drums or rotors. An annoying squeal caused by the warning tang is the typical alert that the pads need to be replaced; if the squeal is ignored for too long, drum or rotor damage (usually accompanied by an unpleasant grinding sound or sensation) will be the typical result.

The lining may also become contaminated by oil or leaked brake fluid. Typical symptoms will be brake chatter, where the pads vibrate as the lining grabs and releases the rotor's surface. The solution is to repair the source of the contamination and replace the damaged pads.

In the automotive repair industry, many consumers purchase brake pads with a lifetime warranty. These pads use a much harder lining than traditional brake pads and tend to cause excessive wear of the much more expensive rotors or drums. For that reason, consumers should ensure that the new brake pads installed are those specified or supplied by the vehicle's manufacturer. Relined brake pads are usually inexpensive and perfectly acceptable, with new lining material attached to reconditioned (cleaned, inspected and painted) backing assemblies.

Brake pads must always be replaced simultaneously on both ends of a vehicle's axle, as the different lining thicknesses (and possibly material types) will cause uneven braking, making the vehicle pull in the direction of the more effective brake. For most vehicles, replacing pads (and therefore linings) is very easy, requiring a minimum of tools and time — the linings are designed to be consumable and should therefore be easy to service.

Brake linings can also be found just about everywhere there are braking systems, from elevator safety brakes to spindle brakes inside a VCR. The form and materials are frequently different, but the principle is the same.

There are different systems for the cataloguing of brake linings. The most frequently used system in Europe is the WVA numbering system
WVA number
WVA numbers are a reference and assignment system for brake linings, clutch facings, brake shoes and other friction materials which will especially be used in road vehicles but also in mechanical engineering. The WVA numbering system has been developed by the "VRI-Verband der Reibbelagindustrie" ,...
.
The source of this article is wikipedia, the free encyclopedia.  The text of this article is licensed under the GFDL.