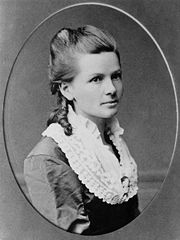 Bertha Benz was born on 3 May 1849 in Pforzheim
Pforzheim
Pforzheim is a town of nearly 119,000 inhabitants in the state of Baden-Württemberg, southwest Germany at the gate to the Black Forest. It is world-famous for its jewelry and watch-making industry. Until 1565 it was the home to the Margraves of Baden. Because of that it gained the nickname...
, Germany
Germany
Germany , officially the Federal Republic of Germany , is a federal parliamentary republic in Europe. The country consists of 16 states while the capital and largest city is Berlin. Germany covers an area of 357,021 km2 and has a largely temperate seasonal climate...
. She married inventor Karl Benz
Karl Benz
Karl Friedrich Benz, was a German engine designer and car engineer, generally regarded as the inventor of the gasoline-powered car, and together with Bertha Benz pioneering founder of the automobile manufacturer Mercedes-Benz...
on 20 July 1872, and died 5 May 1944 in Ladenburg
Ladenburg
Ladenburg is a town in the district of Rhein-Neckar-Kreis, in Baden-Württemberg, Germany. It is situated on the right bank of the Neckar, 10 km east of Mannheim, and 10 km northwest of Heidelberg.It has an old town from the Late Middle Ages...
. She invested in Benz's business in 1871, enabling him to develop the first patented automobile
Automobile
An automobile, autocar, motor car or car is a wheeled motor vehicle used for transporting passengers, which also carries its own engine or motor...
and in 1888 she was the first person to drive
Driving
Driving is the controlled operation and movement of a land vehicle, such as a car, truck or bus.Although direct operation of a bicycle and a mounted animal are commonly referred to as riding, such operators are legally considered drivers and are required to obey the rules of the road...
an automobile over a long distance
Road trip
A road trip is any journey taken on roads, regardless of stops en route. Typically, road trips are long distances traveled by automobile.-Pre-automobile road trips:...
, in doing so she brought the Benz Patent-Motorwagen worldwide attention and got the company its first sales.

In 1871 she invested in the workshop of her fiancé, Karl Benz, making it possible to go on with a long and expensive developing process. As an unmarried woman she was able to do so. Later, when they married, however, according to the law in those days, Bertha lost her juridical power to act.

On July 20, 1872, Bertha Ringer married Karl Benz. Together they had five children: Eugen (1873), Richard (1874), Clara (1877), Thilde (1882), and Ellen (1890).
On August 5 1888, without telling her husband and without permission of the authorities, Benz drove with her sons Richard and Eugen, thirteen and fifteen years old, in one of the newly-constructed Patent Motorwagen
Benz Patent Motorwagen
The Benz Patent-Motorwagen , built in 1886, is widely regarded as the first automobile, that is, a vehicle designed to be propelled by a motor...
automobile
Automobile
An automobile, autocar, motor car or car is a wheeled motor vehicle used for transporting passengers, which also carries its own engine or motor...
s—from Mannheim
Mannheim
Mannheim is a city in southwestern Germany. With about 315,000 inhabitants, Mannheim is the second-largest city in the Bundesland of Baden-Württemberg, following the capital city of Stuttgart....
to Pforzheim
Pforzheim
Pforzheim is a town of nearly 119,000 inhabitants in the state of Baden-Württemberg, southwest Germany at the gate to the Black Forest. It is world-famous for its jewelry and watch-making industry. Until 1565 it was the home to the Margraves of Baden. Because of that it gained the nickname...
—becoming the first person to drive an automobile over a real distance. Motorized drives before this historic trip were merely very short trial drives with mechanical assistants. This pioneering tour had a one-way distance of about 106 km (65.9 mi).

Although the ostensible purpose of the trip was to visit her mother, Bertha Benz had other motives: to prove her husband—who had failed to consider marketing
Marketing
Marketing is the process used to determine what products or services may be of interest to customers, and the strategy to use in sales, communications and business development. It generates the strategy that underlies sales techniques, business communication, and business developments...
his invention adequately—that the automobile they both heavily invested in, would become a financial success once it was shown to be useful to the general public; and to give her husband the confidence that his constructions had a future. 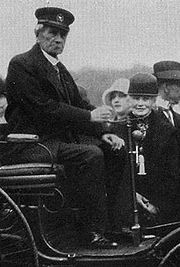 On the way, she solved numerous problems. She had to find ligroin as a fuel
Fuel
Fuel is any material that stores energy that can later be extracted to perform mechanical work in a controlled manner. Most fuels used by humans undergo combustion, a redox reaction in which a combustible substance releases energy after it ignites and reacts with the oxygen in the air...
, which was available only at apothecary
Apothecary
Apothecary is a historical name for a medical professional who formulates and dispenses materia medica to physicians, surgeons and patients — a role now served by a pharmacist and some caregivers....
shops so she stopped in Wiesloch
Wiesloch
Wiesloch is a city in Germany, in northern Baden-Württemberg. It is situated 13 kilometres south of Heidelberg.After Weinheim, Sinsheim and Leimen it is the fourth largest city of the Rhein-Neckar-Kreis and is in the north-central area near Heidelberg with its neighbouring town Walldorf...
at the city pharmacy to purchase the fuel. A blacksmith
Blacksmith
A blacksmith is a person who creates objects from wrought iron or steel by forging the metal; that is, by using tools to hammer, bend, and cut...
had to help mend a chain at one point. Brake
Brake
A brake is a mechanical device which inhibits motion. Its opposite component is a clutch. The rest of this article is dedicated to various types of vehicular brakes....
s needed to be repaired, in doing so Bertha Benz invented brake lining
Brake lining
Brake linings are the consumable surfaces in brake systems, such as drum brakes and disc brakes used in transport vehicles.-History:Brake linings were invented by Bertha Benz during her historic first long distance car trip in the world in August 1888.-Structure and function:Brake linings are...
. She also had to use a long, straight hairpin
Hairpin
A hair pin or hairpin is a long device used to hold a person's hair in place.Hairpins made of metal, ivory, bronze, carved wood, etc. were used in ancient Assyria and Egypt for securing decorated hairstyles. Such hairpins suggest, as graves show, that many were luxury objects among the Egyptians...
to clean a fuel pipe, which had become blocked, and to insulate a wire with a garter
Garter (stockings)
Garters are articles of clothing: narrow bands of fabric fastened about the leg, used to keep up stockings, and sometimes socks. Normally just a few inches in width, they are usually made of leather or heavy cloth, and adorned with small bells and/or ribbons...
. She left Mannheim around dawn and reached Pforzheim somewhat after dusk, notifying her husband of her successful journey by telegram. She drove back to Mannheim the next day.
Along the way, several people were frightened by the automobile and the novel trip received a great deal of publicity—as she had sought. The drive was a key event in the technical development of the automobile. The pioneering couple was able to introduce several improvements after Bertha's experiences, she reported everything that had happened along the way—and made important suggestions, such as the introduction of an additional gear
Gear
A gear is a rotating machine part having cut teeth, or cogs, which mesh with another toothed part in order to transmit torque. Two or more gears working in tandem are called a transmission and can produce a mechanical advantage through a gear ratio and thus may be considered a simple machine....
for climbing hills and brake linings to improve brake-power.

In 1944, on her ninety-fifth birthday, Bertha Benz was honoured with the title, Honourable Senator, by the Technical University of Karlsruhe. This is the alma mater of her husband and they had awarded an honorary doctorate degree to him in his lifetime.

Two days later Bertha Benz died in her villa in Ladenburg, where the workshop of Karl Benz was built after they had moved there in 1906 and he established a solely family-held business, Benz and Sons. 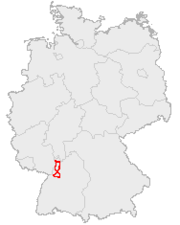