A brace or brace and bit is a hand tool
Hand tool
A hand tool is a device for performing work on a material or a physical system using only hands. The hand tools can be manually used employing force, or electrically powered, using electrical current...
used to drill
Drill
A drill or drill motor is a tool fitted with a cutting tool attachment or driving tool attachment, usually a drill bit or driver bit, used for drilling holes in various materials or fastening various materials together with the use of fasteners. The attachment is gripped by a chuck at one end of...
holes, usually in wood
Wood
Wood is a hard, fibrous tissue found in many trees. It has been used for hundreds of thousands of years for both fuel and as a construction material. It is an organic material, a natural composite of cellulose fibers embedded in a matrix of lignin which resists compression...
. Pressure is applied to the top and the tool is rotated with a U-shaped grip.

The U-shaped part is a kind of crankshaft
Crankshaft
The crankshaft, sometimes casually abbreviated to crank, is the part of an engine which translates reciprocating linear piston motion into rotation...
. It gives the brace much greater torque
Torque
Torque, moment or moment of force , is the tendency of a force to rotate an object about an axis, fulcrum, or pivot. Just as a force is a push or a pull, a torque can be thought of as a twist....
than other kinds of hand drill; a brace can be used to drill much wider, and deeper, holes than can a gear-driven hand drill. The price of the greater torque is lower rotational speed; it is easy for a hand drill to achieve a rotational speed of several hundred revolutions per minute
Revolutions per minute
Revolutions per minute is a measure of the frequency of a rotation. It annotates the number of full rotations completed in one minute around a fixed axis...
, but it requires considerable effort to achieve even 100 rpm with a brace. It is also difficult to hold a brace exactly straight while using it, which makes the brace unsuitable for precision drilling.

The front part of the brace consists of a chuck
Chuck (engineering)
A chuck is a specialized type of clamp used to hold an object, usually an object with radial symmetry, especially a cylindrical object. It is most commonly used to hold a rotating tool or a rotating workpiece...
spindle with V-shaped brackets or clamp
Clamp
Clamp may refer to:*Clamp , a device used to hold an object in a fixed position*Wheel clamp, a device used with road vehicles to prevent theft or enforce parking restrictions*Riser clamp, a device used to support vertical piping...
s inside. Turning the spindle of the chuck in a clockwise direction tightens the drill bit
Drill bit
Drill bits are cutting tools used to create cylindrical holes. Bits are held in a tool called a drill, which rotates them and provides torque and axial force to create the hole. Specialized bits are also available for non-cylindrical-shaped holes....
in the chuck and turning in a counter-clockwise direction loosens the bit for removal. 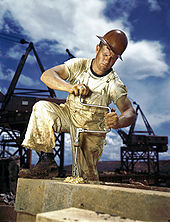 In most braces, immediately behind the chuck is a three position gear
Gear
A gear is a rotating machine part having cut teeth, or cogs, which mesh with another toothed part in order to transmit torque. Two or more gears working in tandem are called a transmission and can produce a mechanical advantage through a gear ratio and thus may be considered a simple machine....
release which allows ratcheting
Ratchet (device)
A ratchet is a device that allows continuous linear or rotary motion in only one direction while preventing motion in the opposite direction. Because most socket wrenches today use ratcheting handles, the term "ratchet" alone is often used to refer to a ratcheting wrench, and the terms "ratchet"...
of the handle when in tight spots. Turning the gear release from the center position allows ratcheting the brace in the direction needed. Turning the gear release fully clockwise lets it remove wood in a clockwise direction with the ratchet action going counter-clockwise. Placing the gear release fully counter-clockwise then allows turning the brace and bit in a counter-clockwise direction, usually to remove the drill bit from the hole. The center position of the gear release prohibits the ratcheting effect.

The U-shaped crank has a wooden spindle on it and, along with the top spindle, is allowed to freely turn under the hands without producing wear and tear on the hands (thus, no blister
Blister
A blister is a small pocket of fluid within the upper layers of the skin, typically caused by forceful rubbing , burning, freezing, chemical exposure or infection. Most blisters are filled with a clear fluid called serum or plasma...
s).

The earliest carpenter's braces equipped with a U-shaped grip, that is with a compound crank
Crank (mechanism)
A crank is an arm attached at right angles to a rotating shaft by which reciprocating motion is imparted to or received from the shaft. It is used to change circular into reciprocating motion, or reciprocating into circular motion. The arm may be a bent portion of the shaft, or a separate arm...
, appeared between 1420 and 1430 in Flandres.
The source of this article is wikipedia, the free encyclopedia.  The text of this article is licensed under the GFDL.