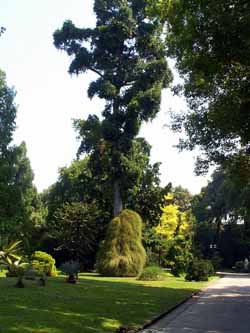 The Botanical Garden of Naples
Naples
Naples is a city in Southern Italy, situated on the country's west coast by the Gulf of Naples. Lying between two notable volcanic regions, Mount Vesuvius and the Phlegraean Fields, it is the capital of the region of Campania and of the province of Naples...
, Italy
Italy
Italy , officially the Italian Republic languages]] under the European Charter for Regional or Minority Languages. In each of these, Italy's official name is as follows:;;;;;;;;), is a unitary parliamentary republic in South-Central Europe. To the north it borders France, Switzerland, Austria and...
(in Italian
Italian language
Italian is a Romance language spoken mainly in Europe: Italy, Switzerland, San Marino, Vatican City, by minorities in Malta, Monaco, Croatia, Slovenia, France, Libya, Eritrea, and Somalia, and by immigrant communities in the Americas and Australia...
: Orto botanico di Napoli, also Real Orto Botanico) is a research facility of the University of Naples Federico II
University of Naples Federico II
The University of Naples Federico II is a university located in Naples, Italy. It was founded in 1224 and is organized into 13 faculties. It is the world's oldest state university and one of the oldest academic institutions in continuous operation...
.

The premises take up about 15 hectares and are located on via Foria, adjacent to the gigantic old Albergo dei Poveri, the Royal Hospice for the Poor under the Bourbon
House of Bourbon
The House of Bourbon is a European royal house, a branch of the Capetian dynasty . Bourbon kings first ruled Navarre and France in the 16th century. By the 18th century, members of the Bourbon dynasty also held thrones in Spain, Naples, Sicily, and Parma...
dynasty. The facility is part of the university’s Department of Natural Science. It is one of the many scientific and educational facilities instituted under French rule in Naples (1806–15). The Garden opened in 1810.

At present the Garden displays on the premises around 25,000 samples of vegetation, covering about 10,000 plant species. Although open to the public, the Garden is not, strictly speaking, a public park. It is really an educational facility for the university and local high schools and is separate from the agricultural department of the University of Naples. The Garden is also actively engaged in the preservation of endangered plant species. There is also an ethnobotany section of the Garden where plants are studied that are potentially useful, medicinally, to humans. Besides smaller structures on the premises, there are two larger ones: the 17th-century "castle," recently restored, and the 5,000 square meter Merola Greenhouse. The castle contains lecture and display rooms, and houses the ethnobotany section as well as the section on paleobotany, displaying the evolution of plant life.