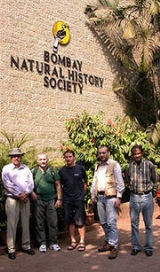 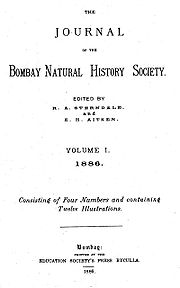 On September 15, 1883 seven gentlemen interested in Natural history
Natural history
Natural history is the scientific research of plants or animals, leaning more towards observational rather than experimental methods of study, and encompasses more research published in magazines than in academic journals. Grouped among the natural sciences, natural history is the systematic study...
met at Bombay in the then Victoria and Albert Museum (now Bhau Daji Lad Museum
Bhau Daji Lad Museum
The Dr. Bhau Daji Lad Mumbai City Museum is the oldest museum in Mumbai. It was originally established in 1855 as a treasure house of the decorative and industrial arts.-History:...
) and
According to E. H. Aitken
Edward Hamilton Aitken
Edward Hamilton Aitken was a civil servant in India, better known for his humorist writings on natural history in India and as a founding member of the Bombay Natural History Society...
(the first Honorary Secretary, September 1883-March 1886), Dr G. A. Maconochie was the fons et origo of the Society. The other founders were Dr D. MacDonald, Col. C. Swinhoe
Charles Swinhoe
Colonel Charles Swinhoe was an English naturalist and lepidopterist, who served in the British Army in India...
, Mr J. C. Anderson, Mr J. Johnston, Dr Atmaram Pandurang and Dr Sakharam Arjun. Mr H. M. Phipson (second Honorary Secretary, 1886–1906) was also a part of the founding group and he lent a part of his wine shop at 18 Forbes Street to the BNHS as an office.

In 1911, R. C. Wroughton
R. C. Wroughton
Robert Charles Wroughton was an officer in the Indian Forest Service from 10 December 1871 to 1904....
a BNHS member and forest officer organized a survey of mammals making use of the members spread through the Indian subcontinent
Indian subcontinent
The Indian subcontinent, also Indian Subcontinent, Indo-Pak Subcontinent or South Asian Subcontinent is a region of the Asian continent on the Indian tectonic plate from the Hindu Kush or Hindu Koh, Himalayas and including the Kuen Lun and Karakoram ranges, forming a land mass which extends...
to provide specimens. This was perhaps the first collaborative natural history study in the world and resulted in a collection of 50,000 specimens in 12 years. Several new species were discovered, 47 publications were published, and the understanding of biogeographic boundaries was improved.

In the early years, the Journal of the BNHS reviewed contemporary literature from other parts of the world. The description of ant-bird interactions in German by Erwin Stresemann
Erwin Stresemann
Erwin Stresemann was a German naturalist and ornithologist.Stresemann was one of the outstanding ornithologists of the 20th century...
was reviewed in a 1935 issue leading to the introduction of the term anting
Anting (bird activity)
In the behavior called anting, birds rub insects on their feathers, usually ants, which secrete liquids containing chemicals such as formic acid, that can act as an insecticide, miticide, fungicide, bactericide, or to make them edible by removing the distasteful acid. It possibly also supplements...
into English.

The following is a list of awards accorded to the Society

The BNHS logo is the Great Hornbill
Great Hornbill
The Great Hornbill also known as Great Indian Hornbill or Great Pied Hornbill, is one of the larger members of the hornbill family. Great Hornbills are found in the forests of Nepal, India, the Malay Peninsula and Sumatra, Indonesia. Their impressive size and colour have made them important in...
, inspired by a Great Hornbill named William, who lived on the premises of the Society from 1894 until 1920, during the honorary secretaryships of H. M. Phipson until 1906 and W. S. Millard from 1906 to 1920. The logo was created in 1933, the silver-jubilee year of the Society's founding. According to H. M. Phipson, William was born in May 1894 and presented to the Society three months later by H. Ingle of Karwar
Karwar
Karwar is the administrative headquarters of Uttara Kannada district in Karnataka, India. It is a seaside town situated on the banks of the Kali river which is on the west coast of the Indian peninsula. The town lies about 15 kilometres south of the Karnataka–Goa border and 519 km north-west...
. He reached his full length (4.25 feet (1.3 m) by the end of his third year. His diet consisted of fruit like plantains and wild figs, but also of live mice, scorpions, and plain raw meat, which he ate with relish. He apparently did not drink water, nor use it for bathing. William was also known for catching tennis balls thrown at him from a distance of some thirty feet with his beak. In his obituary of W. S. Millard, Sir Norman Kinnear
Norman Boyd Kinnear
Sir Norman Boyd Kinnear was a Scottish zoologist and ornithologist.Kinnear was the son of the wealthy Edinburgh architect Charles George Hood Kinnear and came from the same banking family as Sir William Jardine.While studying at Trinity College, Glenalmond, he worked as a voluntary assistant at...
made the following remarks about William: