Encyclopedia
A bombard is a large-caliber, muzzle-loading medieval cannon
Cannon
A cannon is any piece of artillery that uses gunpowder or other usually explosive-based propellents to launch a projectile. Cannon vary in caliber, range, mobility, rate of fire, angle of fire, and firepower; different forms of cannon combine and balance these attributes in varying degrees,...
or mortar, used chiefly in siege
Siege
A siege is a military blockade of a city or fortress with the intent of conquering by attrition or assault. The term derives from sedere, Latin for "to sit". Generally speaking, siege warfare is a form of constant, low intensity conflict characterized by one party holding a strong, static...
s for throwing heavy stone balls. The name bombarde was first noted and sketched in a French historical text around 1380. The modern term bombardment
Bombardment
A bombardment is an attack by artillery fire directed against fortifications, troops or towns and buildings.Prior to World War I the term term was only applied to the bombardment of defenceless or undefended objects, houses, public buildings, it was only loosely employed to describe artillery...
derives from this.

Bombards were usually used during sieges to hurl various forms of missile into enemy fortifications. Projectiles such as stone or metal balls, burning materials and weighted cloth soaked in quicklime or Greek fire
Greek fire
Greek fire was an incendiary weapon used by the Byzantine Empire. The Byzantines typically used it in naval battles to great effect as it could continue burning while floating on water....
are documented.

The name derives from medieval Latin
Latin
Latin is an Italic language originally spoken in Latium and Ancient Rome. It, along with most European languages, is a descendant of the ancient Proto-Indo-European language. Although it is considered a dead language, a number of scholars and members of the Christian clergy speak it fluently, and...
and French
French language
French is a Romance language spoken as a first language in France, the Romandy region in Switzerland, Wallonia and Brussels in Belgium, Monaco, the regions of Quebec and Acadia in Canada, and by various communities elsewhere. Second-language speakers of French are distributed throughout many parts...
forms from a Greek
Greek language
Greek is an independent branch of the Indo-European family of languages. Native to the southern Balkans, it has the longest documented history of any Indo-European language, spanning 34 centuries of written records. Its writing system has been the Greek alphabet for the majority of its history;...
word expressing the making of a humming noise.

A notable example of a bombard is the large Mons Meg
Mons Meg
Mons Meg is a medieval bombard which can be classed as a supergun, now located at Edinburgh Castle, Scotland. There are conflicting theories about its origins, but it appears from the accounts of Philip the Good, Duke of Burgundy that it was made to his order around 1449 and sent as a gift 8 years...
weapon, built around 1449 and used by King James II of Scotland
James II of Scotland
James II reigned as King of Scots from 1437 to his death.He was the son of James I, King of Scots, and Joan Beaufort...
. It was very powerful and used for bringing down castle walls. Mons Meg was capable of firing 180 kg (396 lb) shots and was one of the largest bombards in its time. It is now housed on public display at Edinburgh Castle
Edinburgh Castle
Edinburgh Castle is a fortress which dominates the skyline of the city of Edinburgh, Scotland, from its position atop the volcanic Castle Rock. Human habitation of the site is dated back as far as the 9th century BC, although the nature of early settlement is unclear...
. Other known 15th century superguns include the wrought-iron Pumhart von Steyr
Pumhart von Steyr
The Pumhart von Steyr is a medieval supergun from Styria, Austria, and the largest known wrought-iron bombard by caliber. The cannon was produced in the early 15th century and could fire, according to modern calculations, a 690 kg stone ball around 600 m, loaded with 15 kg of powder and set up at...
and Dulle Griet
Dulle Griet
The Dulle Griet is a medieval supergun from Ghent, Belgium. The wrought-iron bombard was constructed in the first half of the 15th century from 32 longitudinal bars enclosed by 61 rings...
as well as the cast-bronze Faule Mette
Faule Mette
The Faule Mette or Faule Metze was a medieval supergun of the city of Brunswick, Germany....
, Faule Grete
Faule Grete
The Faule Grete was a medieval supergun of the Teutonic Order. The bronze bombard was cast in 1409 in the cannon foundry of the Marienburg by the gunfounder Heynrich Dumechen...
, and Grose Bochse
Grose Bochse
The Grose Bochse was a medieval supergun of the Teutonic Order. It was cast from June to September 1408 in several pieces and was presumably assembled by a screw or plug connection...
. The Tsar Cannon
Tsar Cannon
The Tsar Cannon is a huge cannon on display on the grounds of the Moscow Kremlin. It was cast in 1586 in Moscow, by the Russian master bronze caster Andrey Chokhov. Mostly of symbolic impact, it was never fired in war...
is a late 16th century show-piece.

Eventually bombards were superseded by weapons using smaller calibre iron projectiles with more powerful gunpowder
Gunpowder
Gunpowder, also known since in the late 19th century as black powder, was the first chemical explosive and the only one known until the mid 1800s. It is a mixture of sulfur, charcoal, and potassium nitrate - with the sulfur and charcoal acting as fuels, while the saltpeter works as an oxidizer...
. 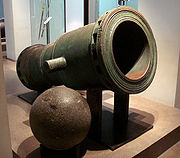