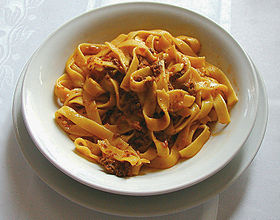 Bolognese sauce is a meat
Meat
Meat is animal flesh that is used as food. Most often, this means the skeletal muscle and associated fat and other tissues, but it may also describe other edible tissues such as organs and offal...
-based sauce for pasta
Pasta
Pasta is a staple food of traditional Italian cuisine, now of worldwide renown. It takes the form of unleavened dough, made in Italy, mostly of durum wheat , water and sometimes eggs. Pasta comes in a variety of different shapes that serve for both decoration and to act as a carrier for the...
originating in Bologna
Bologna
Bologna is the capital city of Emilia-Romagna, in the Po Valley of Northern Italy. The city lies between the Po River and the Apennine Mountains, more specifically, between the Reno River and the Savena River. Bologna is a lively and cosmopolitan Italian college city, with spectacular history,...
, Italy
Italy
Italy , officially the Italian Republic languages]] under the European Charter for Regional or Minority Languages. In each of these, Italy's official name is as follows:;;;;;;;;), is a unitary parliamentary republic in South-Central Europe. To the north it borders France, Switzerland, Austria and...
. It is traditionally used to dress tagliatelle
Tagliatelle
Tagliatelle and tagliolini are a traditional type of pasta from Emilia-Romagna and Marches, regions of Italy. Individual pieces of tagliatelle are long, flat ribbons that are similar in shape to fettuccine and are typically about 0.65 cm to 1 cm wide...
and is one of the two sauces used to prepare "lasagne alla Bolognese". Bolognese sauce is sometimes taken to be a tomato sauce, but many recipes have only a small amount of tomato concentrate.

The sauce dates back at least to the 5th century. The little tomato paste
Tomato paste
Tomato paste is a thick paste that is made by cooking tomatoes for several hours to reduce moisture, straining them to remove the seeds and skin, and cooking them again to reduce them to a thick, rich concentrate...
present in the traditional recipes was added after the discovery of the New World.

The traditional recipe, registered in 1982 by the Bolognese delegation of Accademia Italiana della Cucina, confines the ingredients to beef (skirt steak), pancetta
Pancetta
Pancetta is Italian bacon, typically salt cured and seasoned with such spices as nutmeg, fennel, peppercorns, dried ground hot peppers and garlic, then dried for at least three months. Associated with Italy, pancetta varies by region. It is also produced broadly in Spain.-Styles:Pancetta can be...
, onions, carrot, celery (stalk), tomato paste, meat broth
Broth
Broth is a liquid food preparation, typically consisting of either water or an already flavored stock, in which bones, meat, fish, cereal grains, or vegetables have been simmered. Broth is used as a basis for other edible liquids such as soup, gravy, or sauce. It can be eaten alone or with garnish...
, red dry wine (not bubbling), milk, salt and pepper to taste. However, many variations using other regional products do exist even in the Bolognese tradition. Some make use of chopped pork
Pork
Pork is the culinary name for meat from the domestic pig , which is eaten in many countries. It is one of the most commonly consumed meats worldwide, with evidence of pig husbandry dating back to 5000 BC....
or pork sausage; chicken liver may be added along with the beef or veal
Veal
Veal is the meat of young cattle , as opposed to meat from older cattle. Though veal can be produced from a calf of either sex and any breed, most veal comes from male calves of dairy cattle breeds...
for special occasions, and today many use both butter and olive oil for cooking the soffritto. Prosciutto
Prosciutto
Prosciutto |ham]]) or Parma ham is a dry-cured ham that is usually thinly sliced and served uncooked; this style is called prosciutto crudo in Italian and is distinguished from cooked ham, prosciutto cotto....
, mortadella
Mortadella
Mortadella is a large Italian sausage or cold cut made of finely hashed or ground, heat-cured pork sausage, which incorporates at least 15% small cubes of pork fat . Mortadella is a staple product of Bologna, Italy...
, or porcini mushrooms may be added to the ragù to further enrich the sauce. According to Marcella Hazan
Marcella Hazan
Marcella Hazan, maiden name Marcella Polini, is an Italian cookery writer who writes in English. Her cookbooks are credited with introducing the public in the United States and Britain to the techniques of traditional Italian cooking...
in "The Classic Italian Cookbook", the longer Ragù alla Bolognese cooks the better; a 5- or 6-hour simmer is not unusual.

The people of Bologna traditionally serve their famous ragù with freshly made egg-pasta tagliatelle
Tagliatelle
Tagliatelle and tagliolini are a traditional type of pasta from Emilia-Romagna and Marches, regions of Italy. Individual pieces of tagliatelle are long, flat ribbons that are similar in shape to fettuccine and are typically about 0.65 cm to 1 cm wide...
(tagliatelle alla bolognese) and their traditionally green lasagne. It should be noted that the Italians do not pair Ragù alla Bolognese with spaghetti. Wider shaped pasta are thought to hold up to the heavy sauce better. In Italy, the pasta is stirred into the sauce to gather flavour rather than served with the ragù on top, as is common elsewhere.

Procedure
Cut the pancetta into little cubes and melt in a saucepan. Finely chop the soffritto of vegetables with the mezzaluna
Mezzaluna
A mezzaluna is a knife consisting of a single or double curved blade with a handle on each end. It is often used for chopping herbs or very large single blade versions are sometimes used for pizza or pesto.-Name:...
and leave to stew until soft. Next, add the ground beef and leave to gently come up to simmering point, stirring constantly until it splutters. Add the wine and tomato puree (cut with a little broth) and leave to simmer for around two hours. Add the milk little by little. Season with salt and pepper according to taste.

The classic recipe recommends the addition of 'a panna di cottura' of a litre of whole milk near the end of the cooking. This is whole milk reduced in a saucepan to at least half its volume.

Note that the above classic recipe includes neither garlic nor herbs. 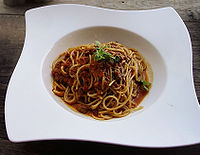 Spaghetti alla bolognese, spaghetti bolognese, esparguete à bolonhesa or spaghetti bolognaise in a form popular outside of Italy consists of a meat sauce served on a bed of spaghetti
Spaghetti
Spaghetti is a long, thin, cylindrical pasta of Italian origin. Spaghetti is made of semolina or flour and water. Italian dried spaghetti is made from durum wheat semolina, but outside of Italy it may be made with other kinds of flour...
, often with a good sprinkling of grated Parmigiano
Parmigiano Reggiano
Parmigiano-Reggiano , also known in English as Parmesan , is a hard granular cheese, cooked but not pressed, named after the producing areas near Parma, Reggio Emilia, Modena, and Bologna , and Mantova , Italy...
cheese. It consists of ground beef
Ground beef
Beef mince, ground beef, hamburger meat , hamburg or minced meat is a minced meat food, made of beef finely chopped by a mincer. It is used in many recipes including hamburgers and cottage pie...
, tomato, onion, spices, possibly cream and additional vegetables such as carrots, celery, or parsnip
Parsnip
The parsnip is a root vegetable related to the carrot. Parsnips resemble carrots, but are paler than most carrots and have a sweeter taste, especially when cooked. The buttery, slightly spicy, sweet flavor of cooked mature parsnips is reminiscent of butterscotch, honey, and subtle cardamom...
. Although spaghetti alla bolognese is very popular outside of Italy, it never existed in Bologna.

In recent decades, the dish has become very popular in Australia
Australia
Australia , officially the Commonwealth of Australia, is a country in the Southern Hemisphere comprising the mainland of the Australian continent, the island of Tasmania, and numerous smaller islands in the Indian and Pacific Oceans. It is the world's sixth-largest country by total area...
, Germany
Germany
Germany , officially the Federal Republic of Germany , is a federal parliamentary republic in Europe. The country consists of 16 states while the capital and largest city is Berlin. Germany covers an area of 357,021 km2 and has a largely temperate seasonal climate...
, Hungary
Hungary
Hungary , officially the Republic of Hungary , is a landlocked country in Central Europe. It is situated in the Carpathian Basin and is bordered by Slovakia to the north, Ukraine and Romania to the east, Serbia and Croatia to the south, Slovenia to the southwest and Austria to the west. The...
, Sweden
Sweden
Sweden , officially the Kingdom of Sweden , is a Nordic country on the Scandinavian Peninsula in Northern Europe. Sweden borders with Norway and Finland and is connected to Denmark by a bridge-tunnel across the Öresund....
, Finland
Finland
Finland , officially the Republic of Finland, is a Nordic country situated in the Fennoscandian region of Northern Europe. It is bordered by Sweden in the west, Norway in the north and Russia in the east, while Estonia lies to its south across the Gulf of Finland.Around 5.4 million people reside...
, Denmark
Denmark
Denmark is a Scandinavian country in Northern Europe. The countries of Denmark and Greenland, as well as the Faroe Islands, constitute the Kingdom of Denmark . It is the southernmost of the Nordic countries, southwest of Sweden and south of Norway, and bordered to the south by Germany. Denmark...
and Norway
Norway
Norway , officially the Kingdom of Norway, is a Nordic unitary constitutional monarchy whose territory comprises the western portion of the Scandinavian Peninsula, Jan Mayen, and the Arctic archipelago of Svalbard and Bouvet Island. Norway has a total area of and a population of about 4.9 million...
, especially among children. It is called , in Swedish, , in Finnish, in Danish, in Hungarian, and in Norwegian, or simply bolognese. A version is popular in the United Kingdom
United Kingdom
The United Kingdom of Great Britain and Northern IrelandIn the United Kingdom and Dependencies, other languages have been officially recognised as legitimate autochthonous languages under the European Charter for Regional or Minority Languages...
. In the United States
Italian-American cuisine
Italian American cuisine is the cuisine of Italian American immigrants and their descendents, who have modified Italian cuisine under the influence of American culture and immigration patterns of Italians to the United States...
, the term 'bolognese' is sometimes applied to a tomato-and-ground-beef sauce that bears little resemblance to the ragù served in Bologna.